The Call of Cthulhu Quotes

There had been aeons when other Things ruled on the earth, and They had had great cities. Remains of Them, he said the deathless Chinamen had told him, were still to be found as Cyclopean stones on islands in the Pacific. They all died vast epochs of time before men came, but there were arts which could revive Them when the stars had come round again to the right positions in the cycle of eternity. They had, indeed, come themselves from the stars, and brought Their images with Them. 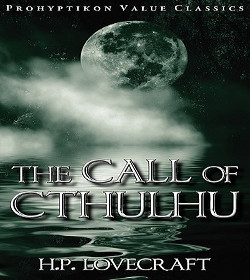