The impulse to acquisition, pursuit of gain, of money, of the greatest possible amount of money, has in itself nothing to do with capitalism. This impulse exists and has existed among waiters, physicians, coachmen, artists, prostitutes, dishonest officials, soldiers, nobles, crusaders, gamblers, and beggars. One may say that it has been common to all sorts and conditions of men at all times and in all countries of the earth, wherever the objective possibility of it is or has been given. It should be taught in the kindergarten of cultural history that this naïve idea of capitalism must be given up once and for all.

The enemy had never been the Germans, just as the enemy now was not the French people: it was the capitalists, the owners of property, the rich and privileged, the ruling class who would use any means, no matter how vicious, to protect their position.

Capitalism has survived communism. Now, it eats away at itself. 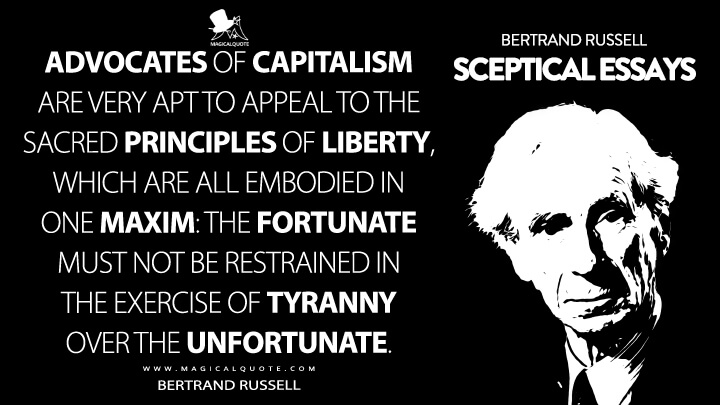 Advocates of capitalism are very apt to appeal to the sacred principles of liberty, which are all embodied in one maxim: The fortunate must not be restrained in the exercise of tyranny over the unfortunate.

On the Improvement of the UnderstandingIn Praise of Idleness and Other EssaysNauseaMemories and PortraitsThe Myth of SisyphusZadigZorba the GreekIn Favor of the Sensitive Man: And Other EssaysManual of the Warrior of LightThe Phenomenology of Spirit