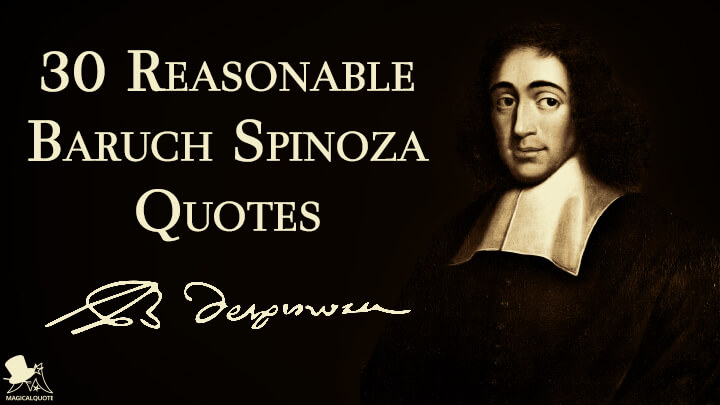 Baruch Spinoza (born November 24, 1632, Amsterdam, Dutch Republic – died February 21, 1677, The Hague, Dutch Republic) was a Dutch philosopher and one of the key figures of the 17th-century Dutch and European Enlightenment. He is famous for the development of monist philosophy, which is known as Spinozism.

Spinoza’s magnum opus, the Ethics, was written in Latin and first published posthumously in 1677. The work earned him recognition as one of the foremost thinkers of Western philosophy.

The significance of Spinoza’s work was not fully understood many years after his death. Today, Spinoza is considered one of the great rationalists of the 17th-century philosophy.

Happiness or unhappiness is made wholly to depend on the quality of the object which we love.On the Improvement of the Understanding (1662)

Freedom is absolutely necessary for progress in science and the liberal arts.'Chapter XX. That in a Free State Every Man May Think What He Likes, and Say What He Thinks,' A Theologico-Political Treatise (1670)

He who seeks equality between unequals, seeks an absurdity.'Chapter IX. Of Aristocracy. Continuation,' Political Treatise (1677) 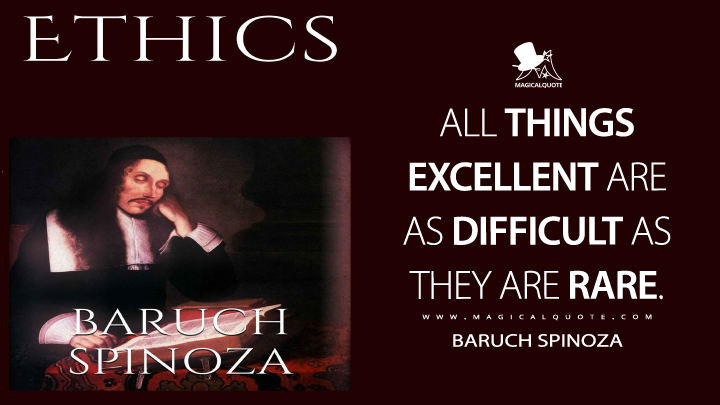 All things excellent are as difficult as they are rare.'Part V, Proposition XLII, Scholium,' Ethics (1677)

God is the indwelling and not the transient cause of all things.'Part I, Proposition XVIII,' Ethics (1677)

Desire is the essence of a man.'Part IV, Proposition XVIII, Proof,' Ethics (1677)

Self-complacency is pleasure accompanied by the idea of one’s self as cause.'Part III, Proposition LI,' Ethics (1677) 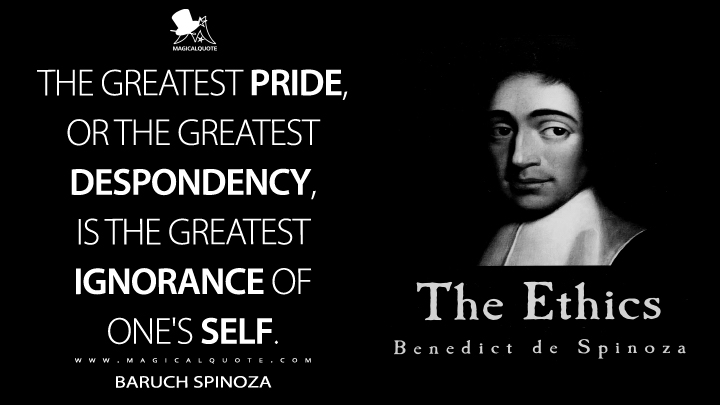 None are more taken in by flattery than the proud, who wish to be the first and are not.'Part IV, Appendix,' Ethics (1677)

True virtue is nothing else but living in accordance with reason.'Part IV, Proposition XXXVII,' Ethics (1677)

If men were born free, they would, so long as they remained free, form no conception of good and evil.'Part IV, Proposition LXVIII,' Ethics (1677) 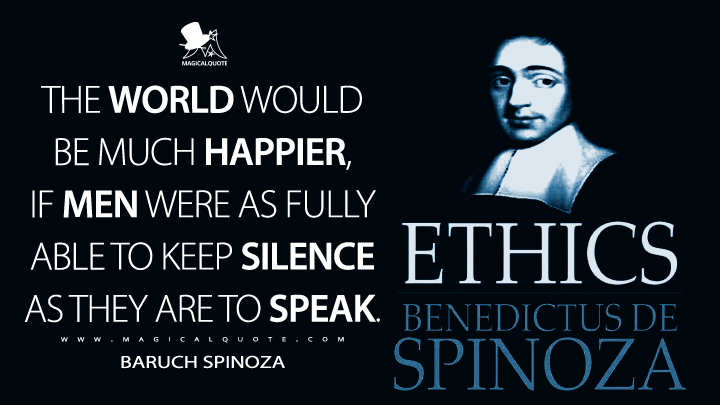 The world would be much happier, if men were as fully able to keep silence as they are to speak.'Part III, Proposition II,' Ethics (1677)

Those who are believed to be most self-abased and humble, are generally in reality the most ambitious and envious.'Part III, Proposition XXIX, Explanation,' Ethics (1677)

I do not know the limits, within which the freedom of my philosophical teaching would be confined, if I am to avoid all appearance of disturbing the publicly established religion.Letter to Fabritius (The Hague, March 30, 1673)

Blessedness is not the reward of virtue, but virtue itself.'Part V, Proposition LXII,' Ethics (1677) 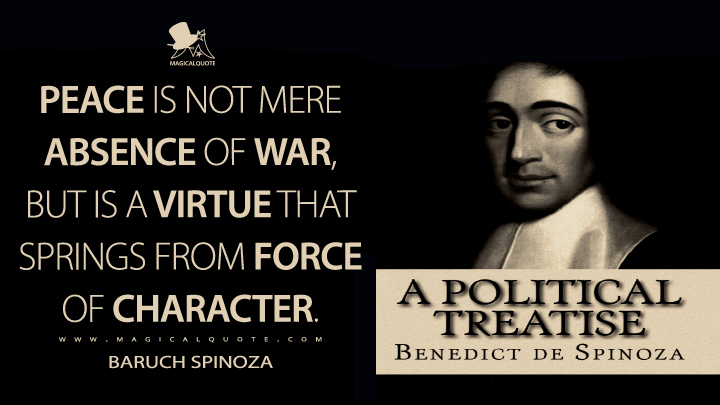 Peace is not mere absence of war, but is a virtue that springs from force of character.'Chapter V. Of the Best State of a Dominion,' Political Treatise (1677)

To indulge ourselves with pleasures only in so far as they are necessary for preserving health.On the Improvement of the Understanding (1662)

The idea, which constitutes the actual being of the human mind, is not simple, but compounded of a great number of ideas.'Part II, Postulates, Proposition XV,' Ethics (1677)

True knowledge of good and evil as we possess is merely abstract or general, and the judgment which we pass on the order of things and the connection of causes, with a view to determining what is good or bad for us in the present, is rather imaginary than real.'Part IV, Proposition LXII, Note,' Ethics (1677) 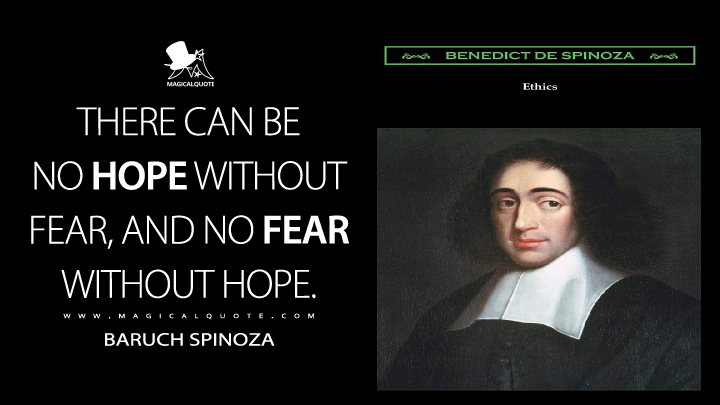 There can be no hope without fear, and no fear without hope.'Part III, Proposition XIII, Explanation,' Ethics (1677)

Whenever a man thinks something is beyond his capability, he necessarily thinks so, and by this belief he is so conditioned that he really cannot do what he thinks he cannot do. For while thinking that he cannot do this or that, he is not determined to do it, and consequently it is impossible that he should do it.'Part III, Explication,' Ethics (1677)

Simply from the fact that we have regarded a thing with the emotion of pleasure or pain, though that thing be not the efficient cause of the emotion, we can either love or hate it.'Part III, Proposition XV, Corollary,' Ethics (1677)

Better for the right counsels of a dominion to be known to its enemies, than for the evil secrets of tyrants to be concealed from the citizens. They who can treat secretly of the affairs of a dominion have it absolutely under their authority, and, as they plot against the enemy in time of war, so do they against the citizens in time of peace.'Chapter VII. Of Monarchy (Continuation),' Political Treatise (1677) 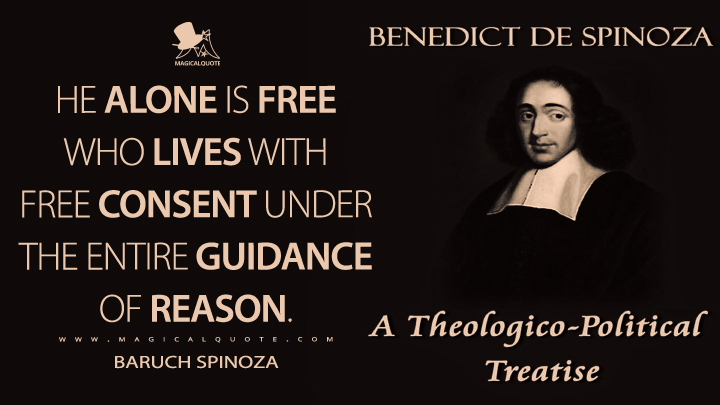 He alone is free who lives with free consent under the entire guidance of reason.'Chapter XVI. Of the Foundations of a State, of the Natural and Civil Rights of Individuals, and of the Rights of the Sovereign Power,' A Theologico-Political Treatise (1670)

The highest activity a human being can attain is learning for understanding, because to understand is to be free.No source

If you want the present to be different from the past, study the past.No source

Do not weep; do not wax indignant. Understand.No source

Be not astonished at new ideas; for it is well known to you that a thing does not therefore cease to be true because it is not accepted by many.No source