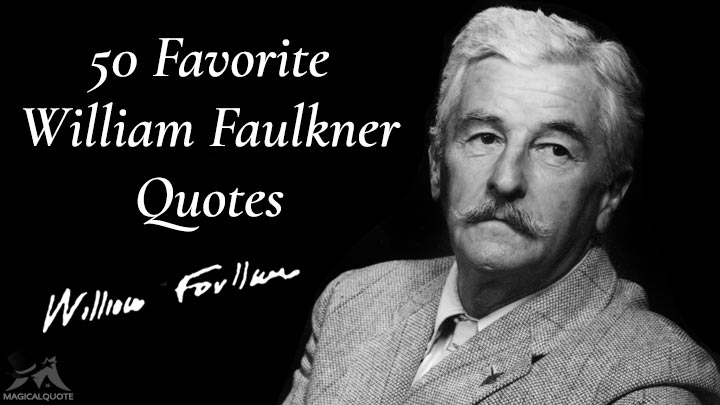 William Cuthbert Faulkner stands as one of the most famous and most prominent American writers of the twentieth century. He was born in New Albany, Mississippi on September 25, 1897.

Most of his early work was poetry, but he is primarily known for his novels set in fabricated Yoknapatawpha County (The Sound and the Fury, As I Lay Dying and Absalom, Absalom!). Apart from poetry and novels, Faulkner also wrote short stories, essays, and screenplays. His literature had a great influence on both popular and Modernist literature.

Faulkner won many awards, among the most important are: the 1949 Nobel Prize in Literature, two Pulitzer Prizes for Fiction (A Fable in 1955 and The Reivers in 1963), and two National Book Awards.

Below are some of our favorite quotes from William Faulkner.

Read, read, read. Read everything – trash, classics, good and bad, and see how they do it. Just like a carpenter who works as an apprentice and studies the master. Read! You’ll absorb it. Then write. If it’s good, you’ll find out. If it’s not, throw it out of the window.Lion in the garden; interviews with William Faulkner (1926-1962)

All of us failed to match our dreams of perfection. So I rate us on the basis of our splendid failure to do the impossible.The Paris Review interview (1956) with Jean Stein

Clocks slay time. Time is dead as long as it is being clicked off by little wheels; only when the clock stops does time come to life.The Sound and the Fury (1929)

Man knows so little about his fellows. In his eyes all men or women act upon what he believes would motivate him if he were mad enough to do what that other man or woman is doing.Light in August (1931)

I believe that man will not merely endure: he will prevail. He is immortal, not because he alone among creatures has an inexhaustible voice, but because he has a soul, a spirit capable of compassion and sacrifice and endurance. The poet’s, the writer’s, duty is to write about these things.Speech at the Nobel Prize Banquet after receiving the Nobel Prize for Literature (December 10, 1950)

Between grief and nothing I will take grief.The Wild Palms (1939)

We must be free not because we claim freedom, but because we practice it.Essay 'On Fear: The South in Labor' (Harper's Magazine, June 1956)

There is no such thing as memory: the brain recalls just what the muscles grope for: no more, no less: and its resultant sum is usually incorrect and false and worthy only of the name of dream.Absalom, Absalom! (1936)

Sin and love and fear are just sounds that people who never sinned nor loved nor feared have for what they never had and cannot have until they forget the words.As I Lay Dying (1930)

Between what did happen and what ought to happened, I dont never have trouble picking ought.The Town (1957)

So vast, so limitless in capacity is man’s imagination to disperse and burn away the rubble-dross of fact and probability, leaving only truth and dream.Requiem for a Nun (1951)

Maybe the only thing worse than having to give gratitude constantly is having to accept it.Requiem for a Nun (1951)

A man is the sum of his misfortunes. One day you’d think misfortune would get tired, but then time is your misfortune.The Sound and the Fury (1929)

When you have plenty of good strong hating you don’t need hope because the hating will be enough to nourish you.Absalom, Absalom! (1936)

It takes two people to make you, and one people to die. That’s how the world is going to end.As I Lay Dying (1930)

A gentleman can live through anything.The Reivers (1962)

Be scared. You can’t help that. But don’t be afraid. Ain’t nothing in the woods going to hurt you unless you corner it, or it smells that you are afraid. A bear or a deer, too, has got to be scared of a coward the same as a brave man has got to be.'The Bear' in The Saturday Evening Post (May 9, 1942)

Proof is but a fallacy invented by man to justify to himself and his fellows his own crass lust and folly.Beyond (1933)

Poets are almost always wrong about facts. That’s because they are not really interested in facts: only in truth.The Town (1957)

Time is a fluid condition which has no existence except in the momentary avatars of individual people. There is no such thing as was — only is.The Paris Review interview (1956) with Jean Stein

To the man grown the long crowded mile of his boyhood becomes less than the throw of a stone.Absalom, Absalom! (1936)

Purity is a negative state and therefore contrary to nature.The Sound and the Fury (1929)

When grown people speak of the innocence of children, they dont really know what they mean.The Reivers (1962)

The reason you will not say it is, when you say it, even to yourself, you will know it is true.As I Lay Dying (1930)

What makes a fool is an inability to take even his own good advice.Light in August (1931)

Your illusions are a part of you like your bones and flesh and memory.Absalom, Absalom! (1936)

Victory is an illusion of philosophers and fools.The Sound and the Fury (1929)

People to whom sin is just a matter of words, to them salvation is just words too.As I Lay Dying (1930)

Love in the young requires as little of hope as of desire to feed upon.Light in August (1931)

An artist is a creature driven by demons. He don’t know why they choose him and he’s usually too busy to wonder why. He is completely amoral in that he will rob, borrow, beg, or steal from anybody and everybody to get the work done.The Paris Review interview (1956) with Jean Stein

Life was created in the valleys. It blew up onto the hills on the old terrors, the old lusts, the old despairs. That’s why you must walk up the hills so you can ride down.As I Lay Dying (1930)

Necessity has a way of obliterating from our conduct various delicate scruples regarding honor and pride.Absalom, Absalom! (1936)

All men are just accumulations dolls stuffed with sawdust swept up from the trash heaps where all previous dolls had been thrown away.The Sound and the Fury (1929)

A man. All men. He will pass up a hundred chances to do good for one chance to meddle where meddling is not wanted. He will overlook and fail to see chances, opportunities, for riches and fame and welldoing, and even sometimes for evil. But he won’t fail to see a chance to meddle.Light in August (1931)

Nothing can destroy the good writer. The only thing that can alter the good writer is death. Good ones don’t have time to bother with success or getting rich.The Paris Review interview (1956) with Jean Stein

There are some things for which three words are three too many, and three thousand words that many words too less.Absalom, Absalom! (1936)

A man never gets anywhere if facts and his ledgers don’t square.The Sound and the Fury (1929)

Every man is the arbiter of his own virtues but let no man prescribe for another man’s wellbeing.The Sound and the Fury (1929)

The reason for living was to get ready to stay dead a long time.As I Lay Dying (1930)