The place of the father in the modern suburban family is a very small one – particularly if he plays golf, which he usually does.

The life of man is a long march through the night, surrounded by invisible foes, tortured by weariness and pain, towards a goal that few can hope to reach, and where none may tarry long.

The human race may well become extinct before the end of the century. Speaking as a mathematician, I should say the odds are about three to one against survival.

The fact that a belief has a good moral effect upon a man is no evidence whatsoever in favor of its truth.

The essence of good manners consists in making it clear that one has no wish to hurt. When it is clearly necessary to hurt, it must be done in such a way as to make it evident that the necessity is felt to be regrettable.

Shall we put an end to the human race; or shall mankind renounce war? People will not face this alternative because it is so difficult to abolish war. The abolition of war will demand distasteful limitations of national sovereignty. But what perhaps impedes understanding of the situation more than anything else is that the term “mankind” feels vague and abstract. People scarcely realize in imagination that the danger is to themselves and their children and their grandchildren, and not only to a dimly apprehended humanity. They can scarcely bring themselves to grasp that they, individually, and those whom they love are in imminent danger of perishing agonizingly.

Science does not aim at establishing immutable truths and eternal dogmas; its aim is to approach the truth by successive approximations, without claiming that at any stage final and complete accuracy has been achieved. 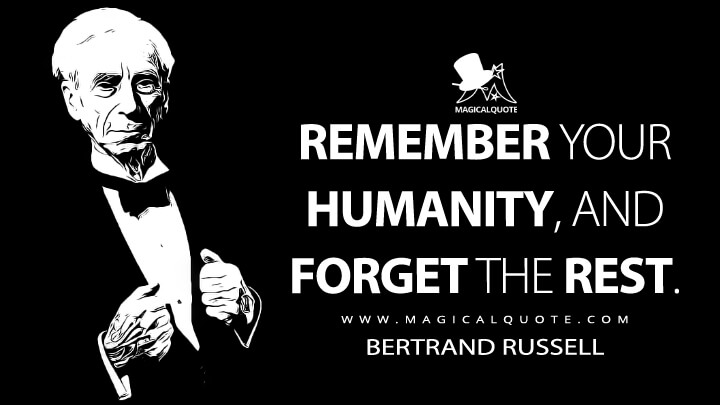 Remember your humanity, and forget the rest.

Religions that teach brotherly love have been used as an excuse for persecution, and our profoundest scientific insight is made into a means of mass destruction.

Religion is based, I think, primarily and mainly upon fear. It is partly the terror of the unknown, and partly, as I have said, the wish to feel that you have a kind of elder brother who will stand by you in all your troubles and disputes. Fear is the basis of the whole thing – fear of the mysterious, fear of defeat, fear of death. Fear is the parent of cruelty, and therefore it is no wonder if cruelty and religion has gone hand-in-hand. It is because fear is at the basis of those two things. In this world we can now begin a little to understand things, and a little to master them by help of science, which has forced its way step by step against the Christian religion, against the Churches, and against the opposition of all the old precepts. Science can help us to get over this craven fear in which mankind has lived for so many generations. Science can teach us, and I think our own hearts can teach us, no longer to look round for imaginary supports, no longer to invent allies in the sky, but rather to look to our own efforts here below to make this world a fit place to live in, instead of the sort of place that the churches in all these centuries have made it.