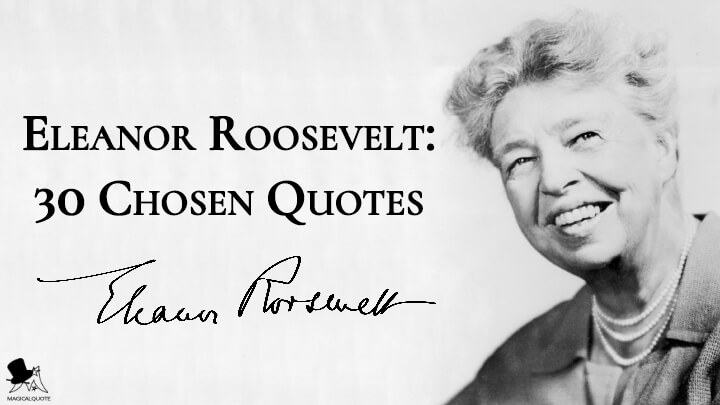 As the wife of President Franklin D. Roosevelt, Eleanor Roosevelt was the longest-serving first lady of the United States (1933–45). Redefining the role of the first lady, she advocated for human rights, held regular press conferences, and write a daily newspaper column.

After leaving the White House, she served as the first chair of the UN Commission on Human Rights (1946–52) and played a leading role in the drafting of the Universal Declaration of Human Rights (1948).

If life were predictable it would cease to be life, and be without flavor.'Part II. Today, Chapter 6. The Revolution in Education,' Tomorrow Is Now (1963)

If the use of leisure time is confined to looking at TV for a few extra hours every day, we will deteriorate as a people.My Day (November 5, 1958)

Life was meant to be lived, and curiosity must be kept alive. One must never, for whatever reason, turn his back on life.'Preface,' The Autobiography of Eleanor Roosevelt (1961)

When life is too easy for us, we must beware or we may not be ready to meet the blows which sooner or later come to everyone, rich or poor.My Day (February 23, 1940) 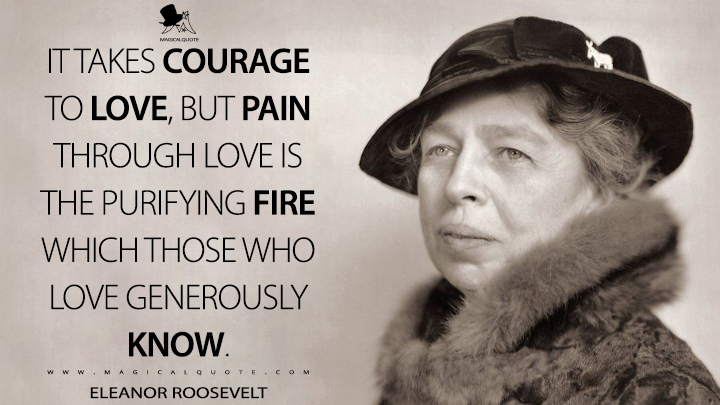 It takes courage to love, but pain through love is the purifying fire which those who love generously know.My Day (April 1, 1939)

Anyone who thinks must think of the next war as they would of suicide.Speech at the National Conference on the Cause and Cure of War (January 21, 1941)

This freedom of which men speak, for which they fight, seems to some people a perilous thing. It has to be earned at a bitter cost and then — it has to be lived with. For freedom makes a huge requirement of every human being. With freedom comes responsibility.'Chapter 9. Facing Responsibility,' You Learn by Living (1960)

The purpose of life, after all, is to live it, to taste experience to the utmost, to reach out eagerly and without fear for newer and richer experience.'Preface,' You Learn by Living (1960)

I can not believe that war is the best solution. No one won the last war, and no one will win the next war.Letter to Harry Truman (March 22, 1948) 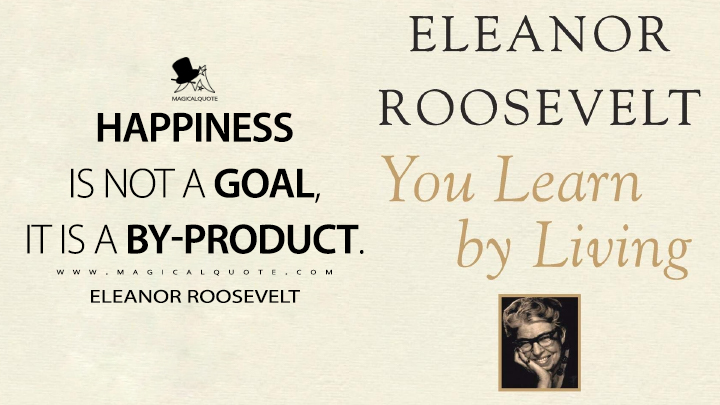 People grow through experiences, if they meet life honestly and courageously. This is how character is built.My Day (August 2, 1941)

Will people ever be wise enough to refuse to follow bad leaders or to take away the freedom of other people?My Day (October 16, 1939) 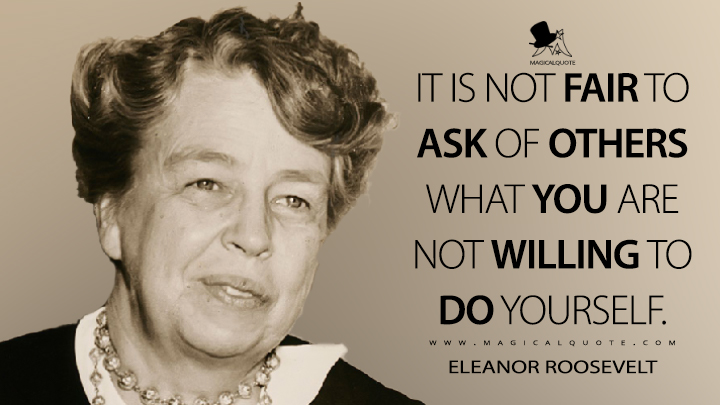 We face the future fortified with the lessons we have learned from the past. It is today that we must create the world of the future.'Foreword,' Tomorrow Is Now (1963)

One of the best ways of enslaving a people is to keep them from education.My Day (May 11, 1943)

One thing life has taught me: if you are interested, you never have to look for new interests. They come to you.'Chapter 1. Learning to Learn,' You Learn by Living (1960) 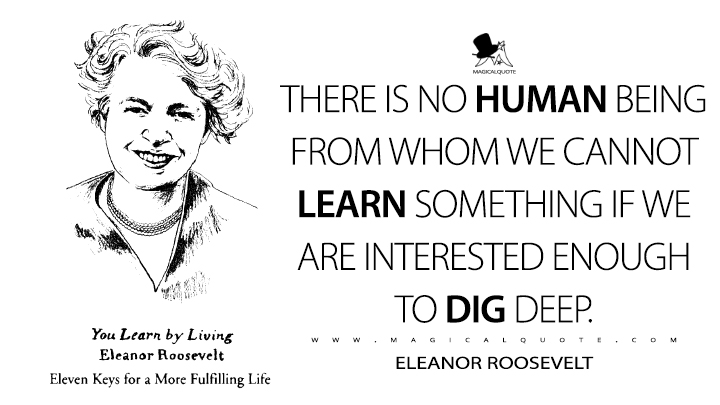 There is no human being from whom we cannot learn something if we are interested enough to dig deep.'Chapter 1. Learning to Learn,' You Learn by Living (1960)

What counts, in the long run, is not what you read; it is what you sift through your own mind; it is the ideas and impressions that are aroused in you by your reading.'Chapter 1. Learning to Learn,' You Learn by Living (1960)

One should always sleep in all of one’s guests’ beds, to make sure that they are comfortable.My Day (September 12, 1941)

You must do the thing you think you cannot do.'Chapter 2. Fear-the Great Enemy,' You Learn by Living (1960)

Courage is more exhilarating than fear and in the long run it is easier. We do not have to become heroes overnight. Just a step at a time, meeting each thing that comes up, seeing it is not as dreadful as it appeared, discovering we have the strength to stare it down.'Chapter 2. Fear-the Great Enemy,' You Learn by Living (1960) 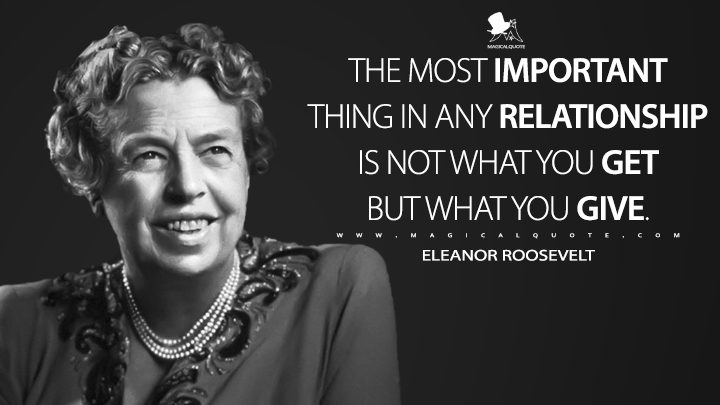 The most important thing in any relationship is not what you get but what you give.'Preface,' The Autobiography of Eleanor Roosevelt (1961)

You gain strength, courage and confidence by every experience in which you really stop to look fear in the face.'Chapter 2. Fear-the Great Enemy,' You Learn by Living (1960)

What we must learn to do is to create unbreakable bonds between the sciences and the humanities. We cannot procrastinate. The world of the future is in our making. Tomorrow is now.'Part Three: Tomorrow, Chapter 10. The Land Is Bright,' Tomorrow Is Now (1963)

No writing has any real value which is not the expression of genuine thought and feeling.My Day (December 20, 1939)

One’s philosophy is not best expressed in words; it is expressed in the choices one makes.'Foreward,' You Learn by Living (1960) 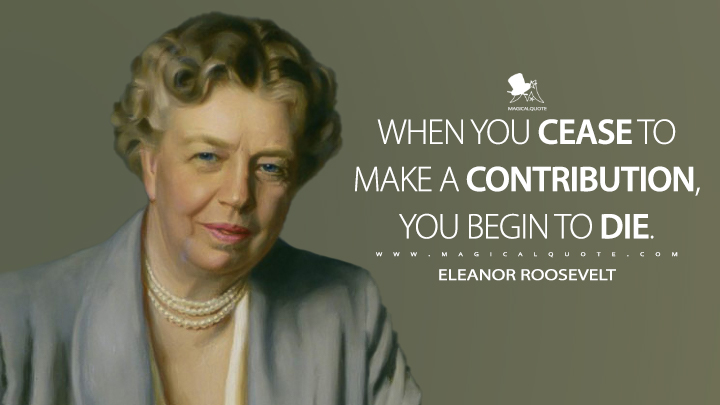 When you cease to make a contribution, you begin to die.Letter to Mr. Horne (February 19, 1960)

The future belongs to those who believe in the beauty of their dreams.No source

A woman is like a tea bag – you can’t tell how strong she is until you put her in hot water.No source

No one can make you feel inferior without your consent.Unclear source (More info)

It is better to light a candle than to curse the darkness.Chinese proverb