It’s sad when a mother has to speak the words that condemn her own son, but I couldn’t allow them to believe that I would commit murder. They’ll put him away now, as I should have years ago. He was always bad, and in the end he intended to tell them I killed those girls and that man, as if I could do anything except just sit and stare, like one of his stuffed birds. They know I can’t even move a finger, and I won’t. I’ll just sit here and be quiet, just in case they do suspect me. They’re probably watching me. Well, let them. Let them see what kind of a person I am. I’m not even gonna swat that fly. I hope they are watching. They’ll see. They’ll see and they’ll know, and they’ll say, “Why, she wouldn’t even harm a fly.”[voiceover in police custody, as Norman is thinking] 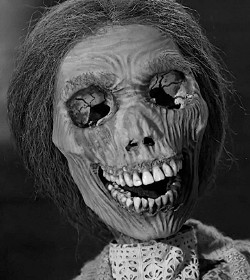