The Most Exceptional Don Quixote Quotes 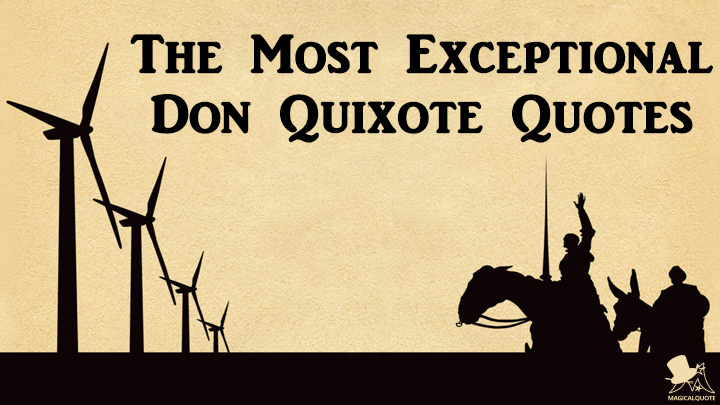 Don Quixote is a Spanish novel written by Miguel de Cervantes Saavedra. Don Quixote, originally published in Spanish in two parts (Part I, 1605; Part II, 1615), is one of the most read, published and translated book after the Bible.

Don Quixote is a story about the adventures of a middle-aged nobleman named Alonso Quixano who, after reading many chivalric romances, decides to become a knight-errant.

Don Quixote is considered by many literary historians to be one of the most important and influent books of all time. As a founding work of modern literature and with its experimental form, Don Quixote is also often recognized as the first modern novel.

The book had a huge impact on the majority of writers, especially on Dickens, Melville, and Faulkner. 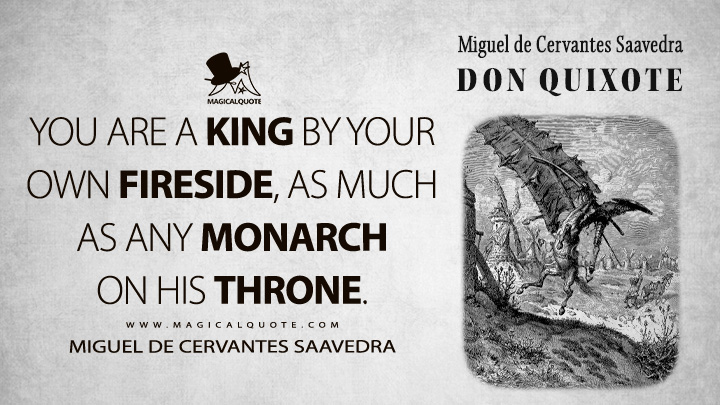 You are a king by your own fireside, as much as any monarch on his throne.The Author's Preface to the Reader 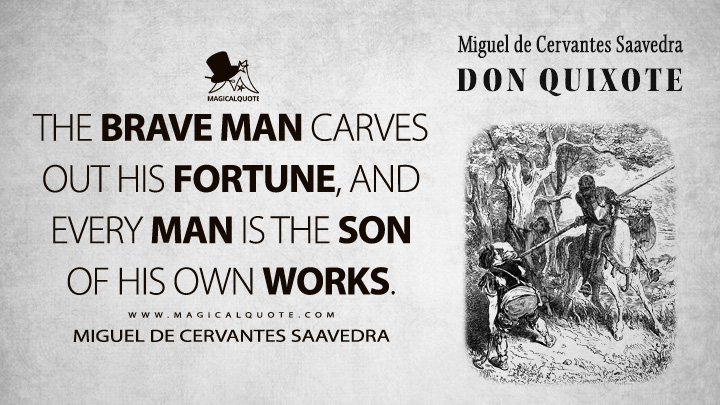 The brave man carves out his fortune, and every man is the son of his own works.Chapter IV, Part I 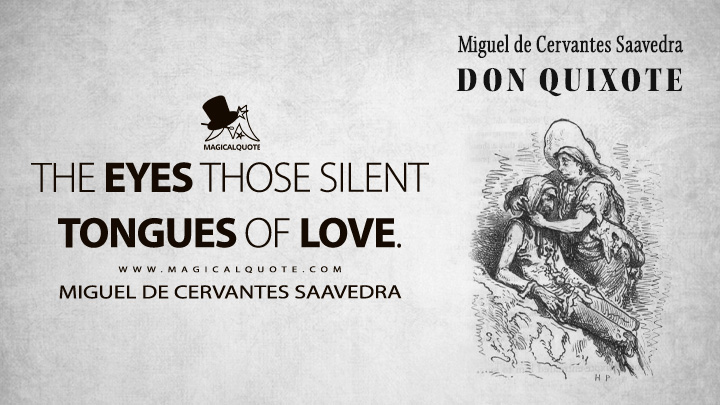 The eyes those silent tongues of love.Chapter XI, Part I 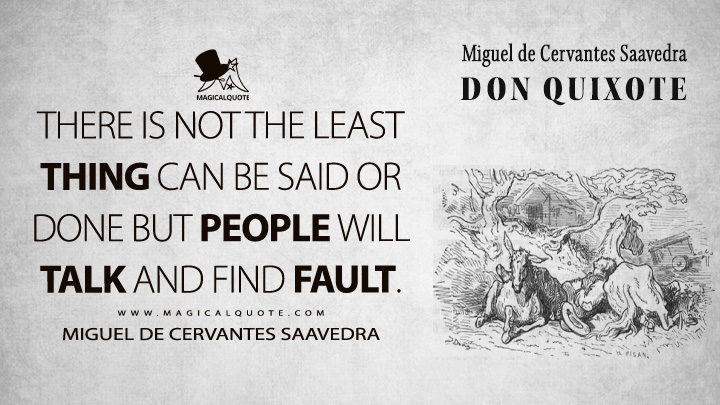 There is not the least thing can be said or done but people will talk and find fault.Chapter XII, Part I 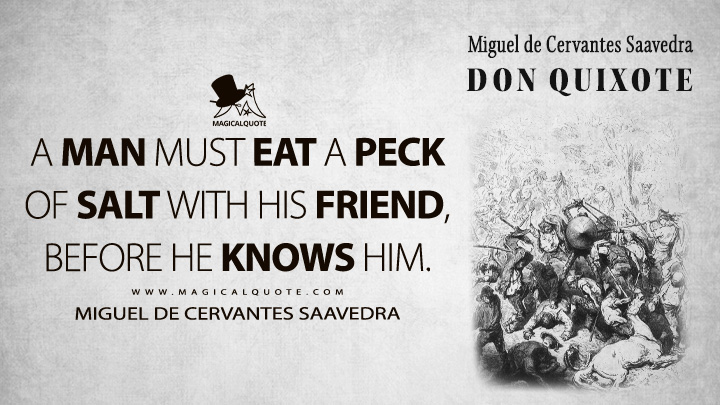 It is a true saying, that ‘a man must eat a peck of salt with his friend, before he knows him.’Chapter XV, Part I 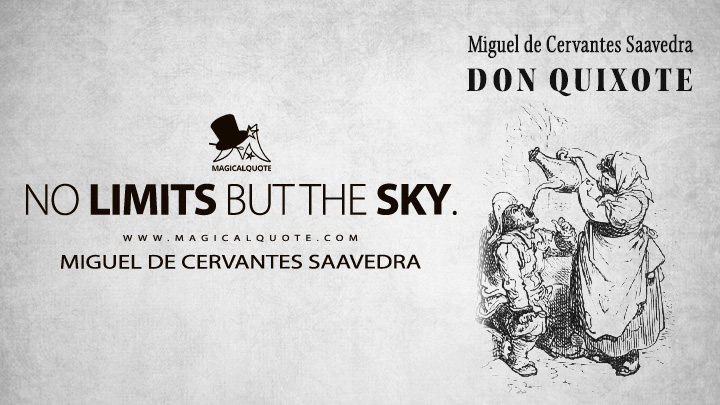 No limits but the sky.Chapter XVI, Part I 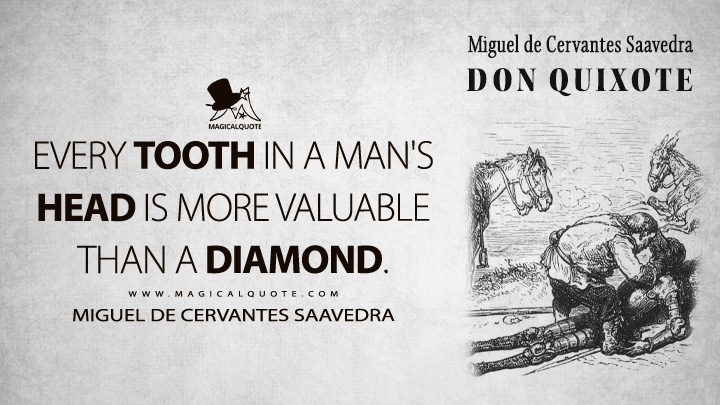 Every tooth in a man’s head is more valuable than a diamond.Chapter XVII, Part I 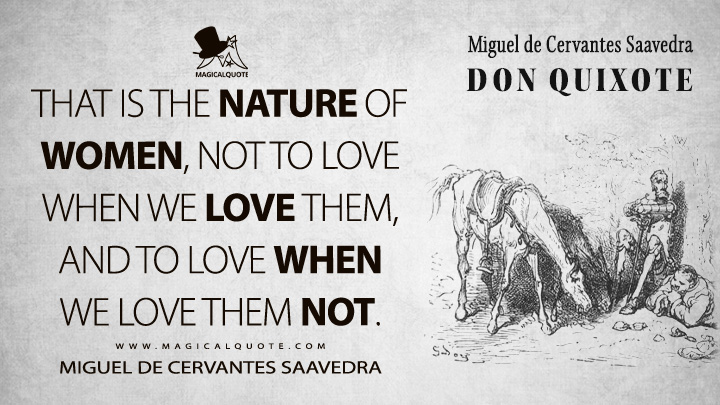 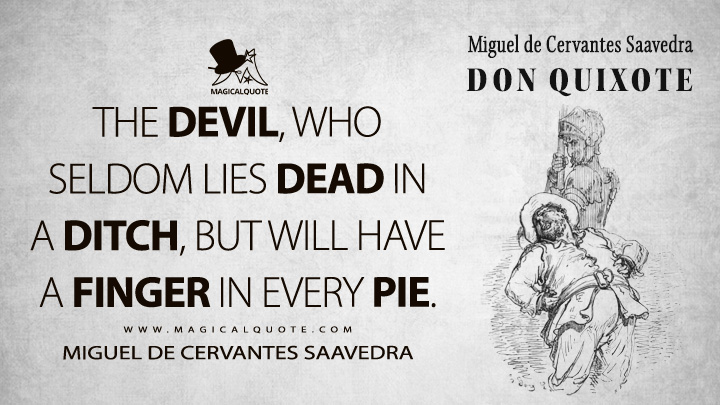 The devil, who seldom lies dead in a ditch, but will have a finger in every pie.Chapter XIX, Part I 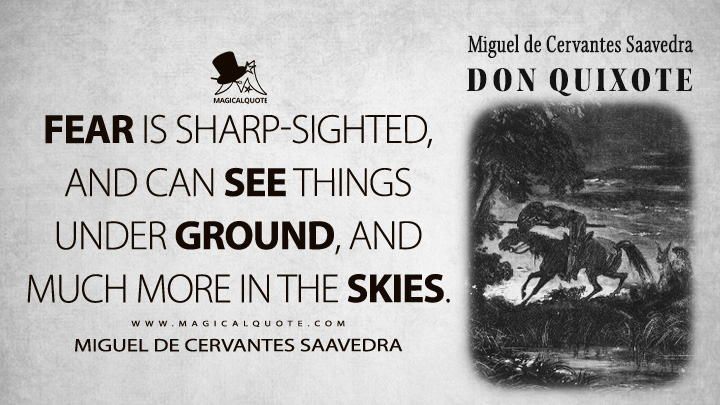 Fear is sharp-sighted, and can see things under ground, and much more in the skies.Chapter XX, Part I 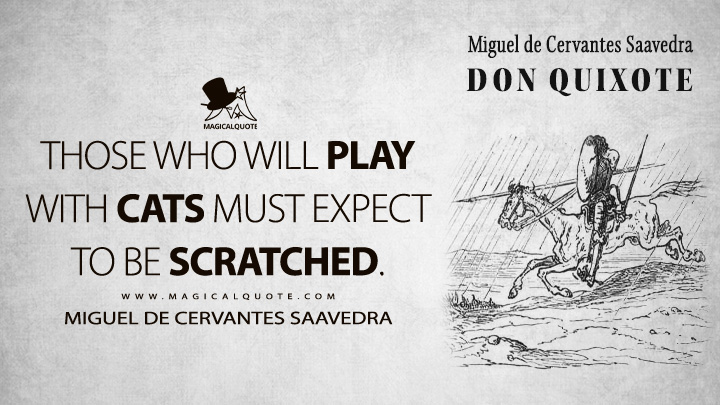 Those who play with cats must expect to be scratched.Chapter XXI, Part I 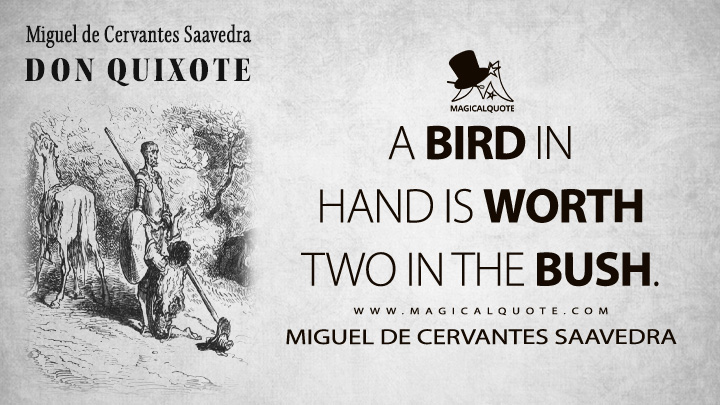 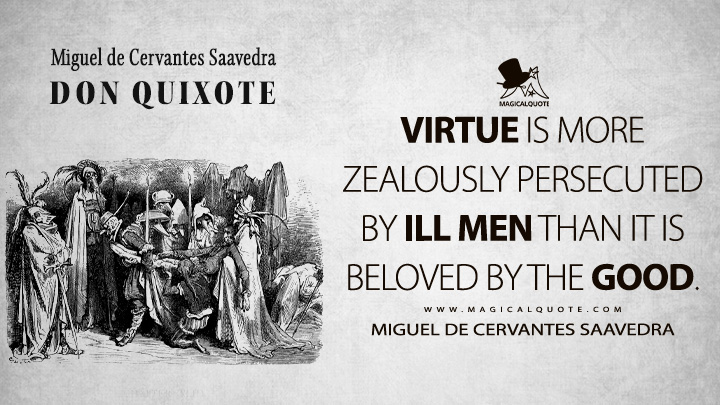 Virtue is more zealously persecurod by ill men than it is beloved by the good.Chapter XLIII, Part I 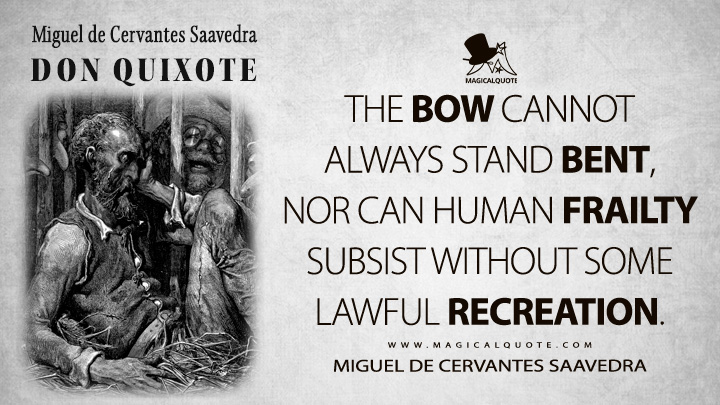 The bow cannot always stand bent, nor can human frailty subsist without some lawful recreation.Chapter XLIV, Part I 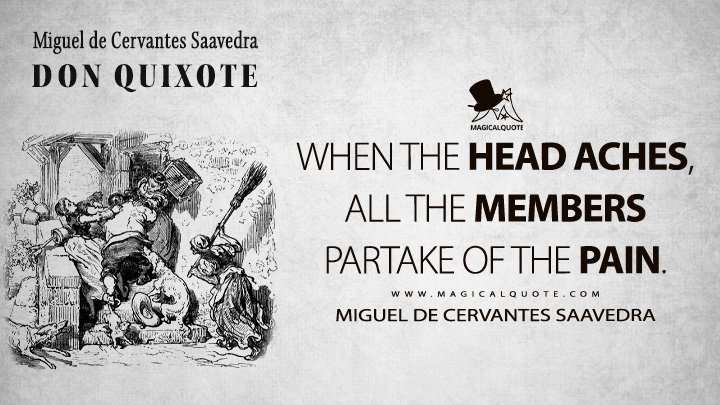 When the head aches, all the members partake of the pain.Chapter II, Part II 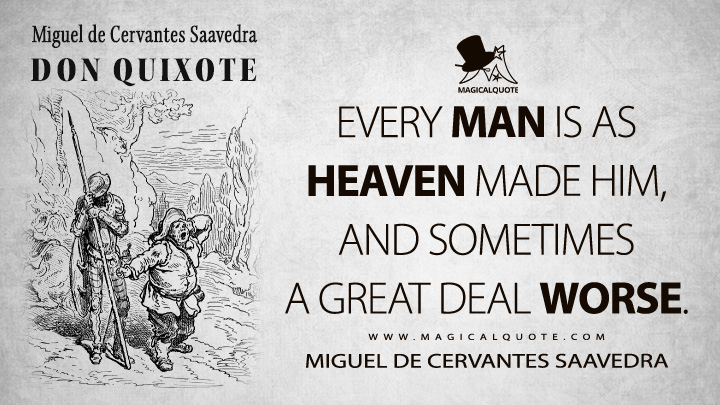 Every man is as Heaven made him, and sometimes a great deal worse.Chapter IV, Part II 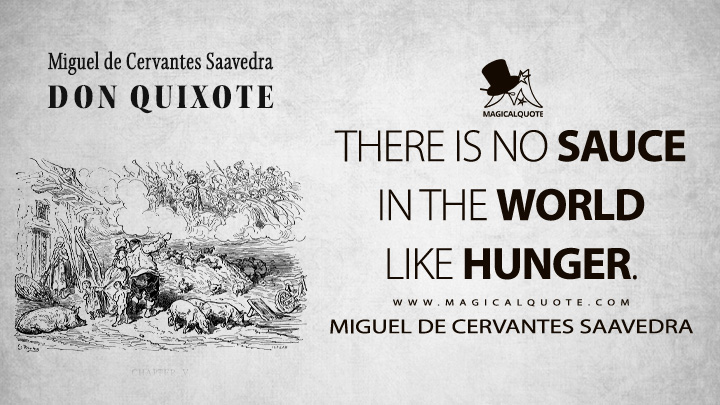 There is no sauce in the world like hunger.Chapter V, Part II 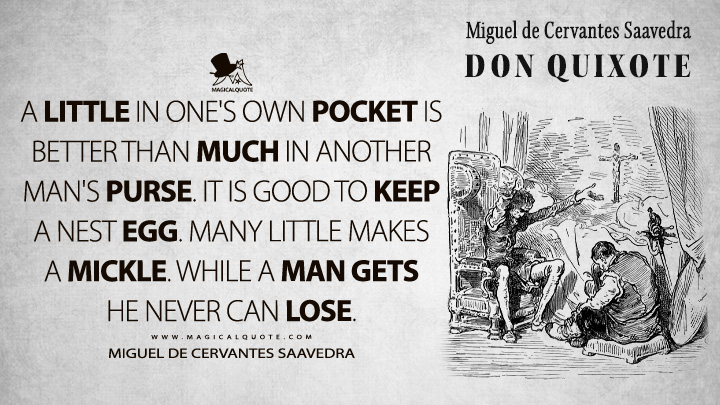 A little in one’s own pocket is better than much in another man’s purse. It is good to keep a nest egg. Every little makes a mickle.Chapter VII, Part II 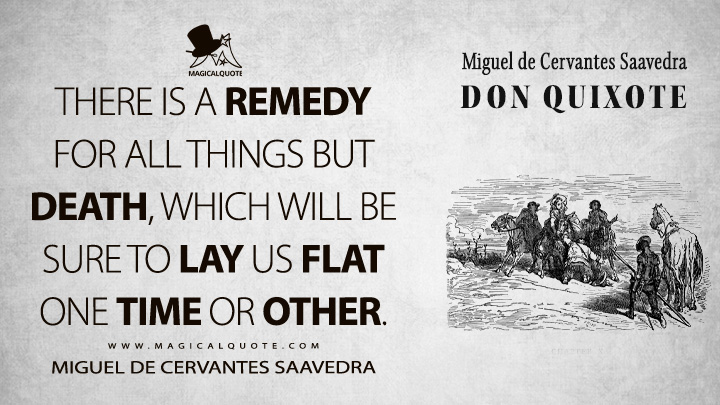 There is a remedy for all things but death, which will be sure to lay us flat one time or other.Chapter X, Part II

There were but two families in the world — Have-Much and Have-Little.Chapter XX, Part II 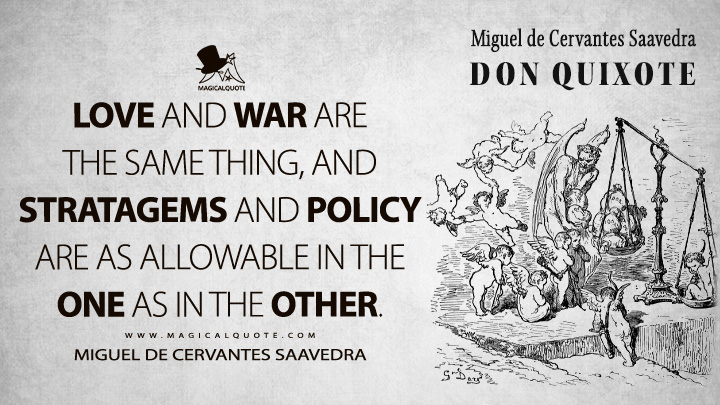 Love and war are the same thing, and stratagems and policy are as allowable in the one as in the other.Chapter XXI, Part II 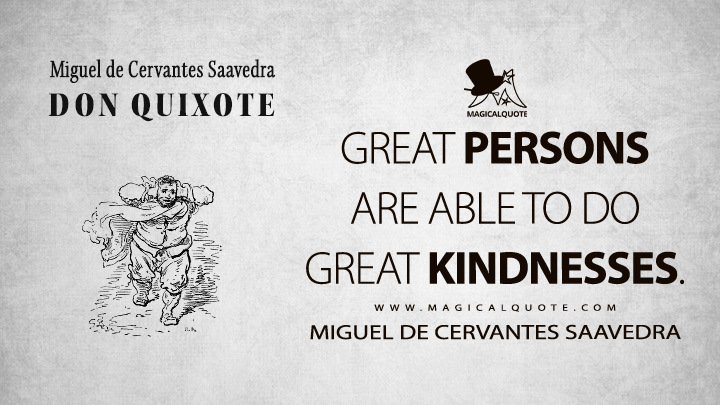 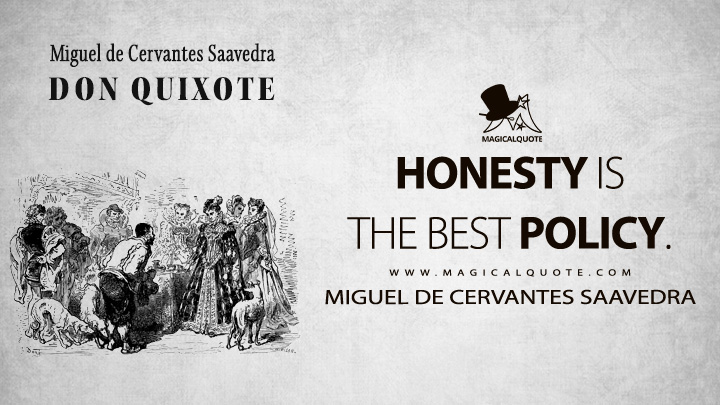 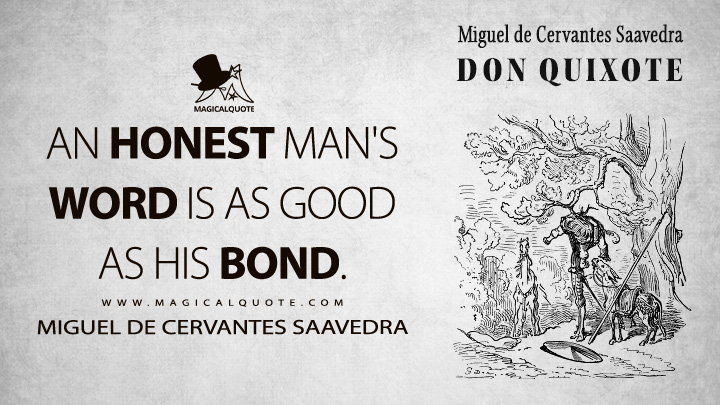 An honest man’s word is as good as his bond.Chapter XXXIV, Part II 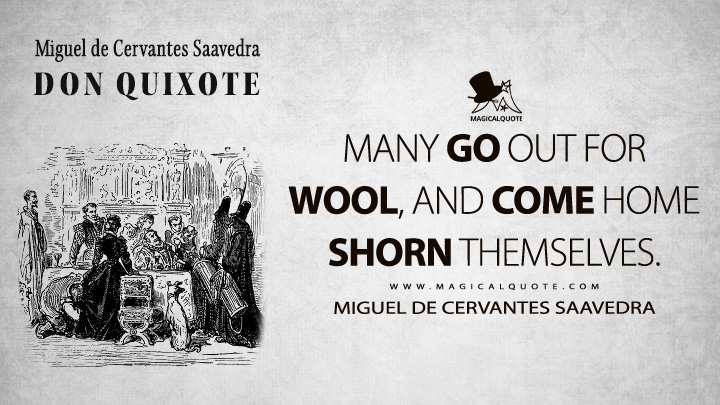 Many go out for wool, and come home shorn themselves.Chapter XXXVII, Part II 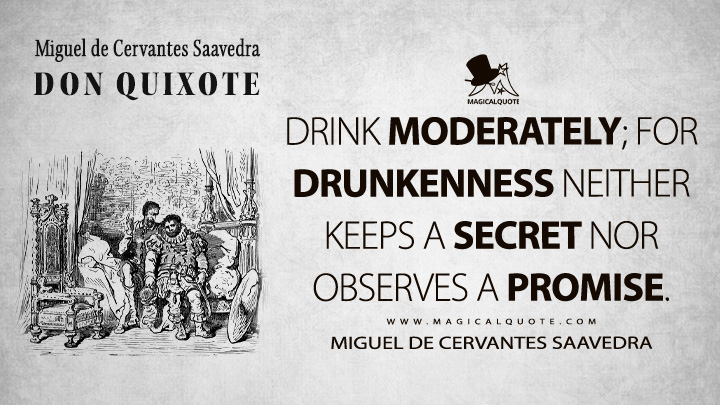 Drink moderately; for drunkenness neither keeps a secret nor observes a promise.Chapter XLIII, Part II 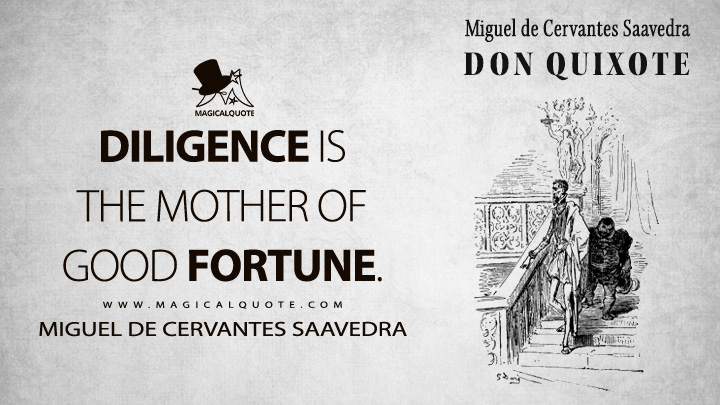 Diligence is the mother of good fortune.Chapter XLIII, Part II 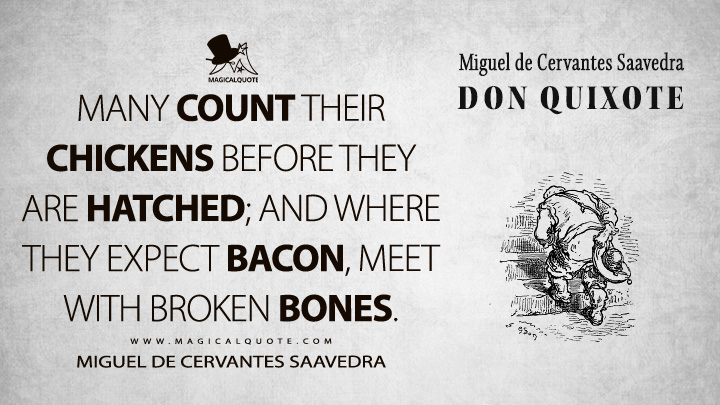 Many count their chickens before they are hatched; and where they expect bacon, meet with broken bones.Chapter LV, Part II 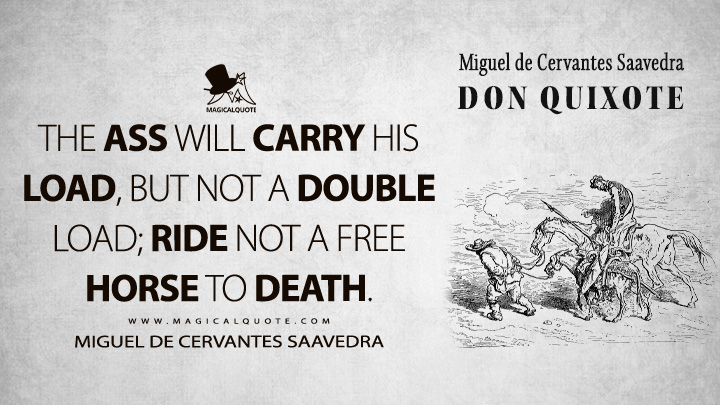 The ass will carry his load, but not a double load; ride not a free horse to death.Chapter LXXI, Part II 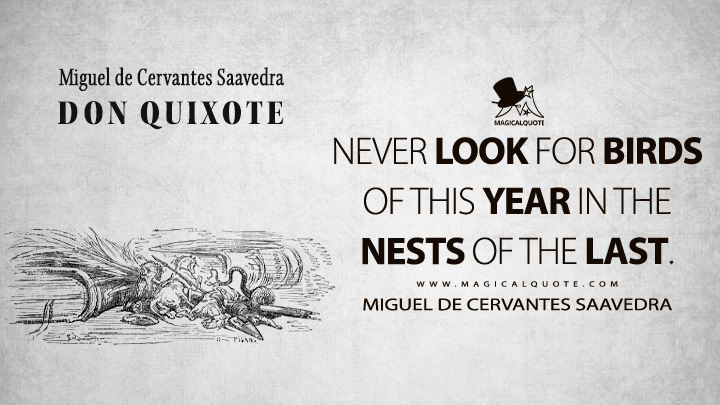 Never look for birds of this year in the nests of the last.Chapter LXXV, Part II