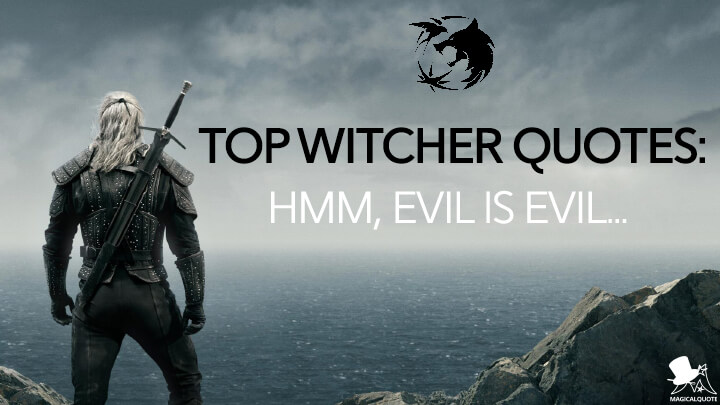 Based on the book series of the same name written by Andrzej Sapkowski, The Witcher is an American fantasy series created for Netflix by Lauren Schmidt Hissrich.

The series follows the story of Geralt of Rivia, a monster hunter, who tries to find his place in a medieval fantasy world.

The main cast consists of Henry Cavill as Geralt of Rivia, Freya Allan as Ciri, and Anya Chalotra as Yennefer of Vengerberg. 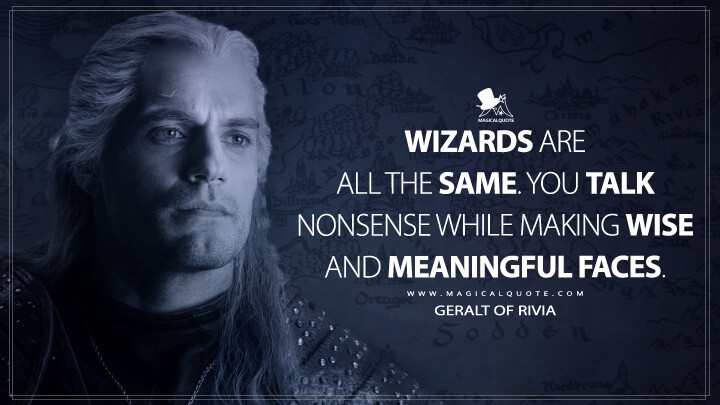 1
Wizards are all the same. You talk nonsense while making wise and meaningful faces.Geralt of Rivia, (to Stregobor), S1.Ep1: The End's Beginning 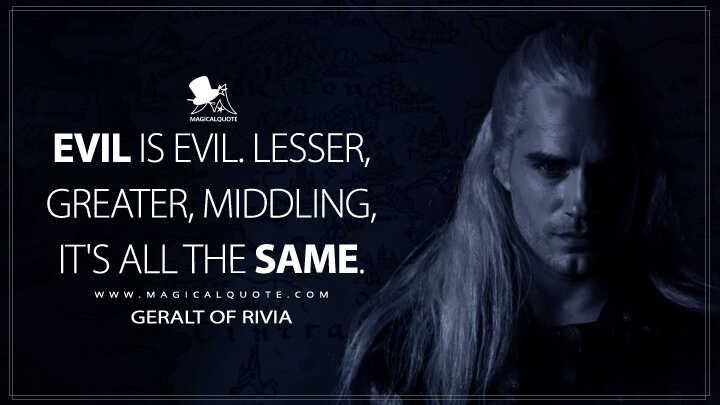 2
Evil is evil. Lesser, greater, middling, it’s all the same.Geralt of Rivia, (to Stregobor), S1.Ep1: The End's Beginning 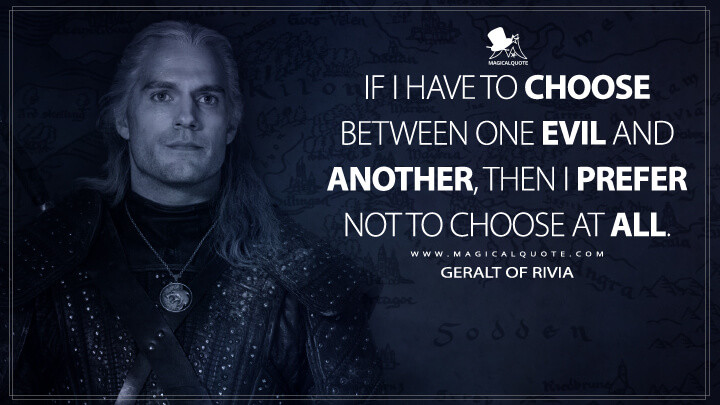 3
If I have to choose between one evil and another, then I prefer not to choose at all.Geralt of Rivia, (to Stregobor), S1.Ep1: The End's Beginning 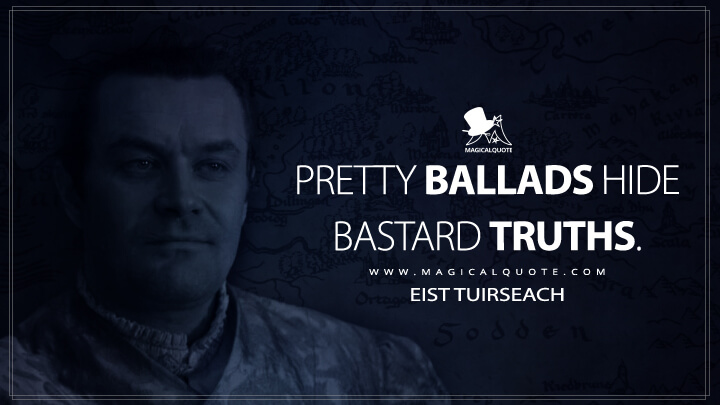 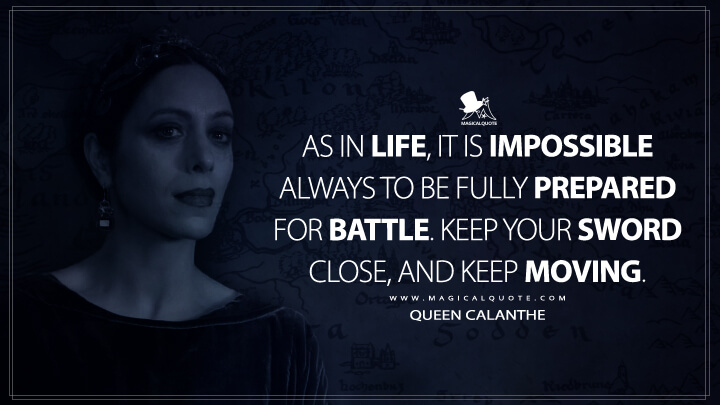 5
As in life, it is impossible always to be fully prepared for battle. Keep your sword close, and keep moving.Queen Calanthe, S1.Ep1: The End's Beginning 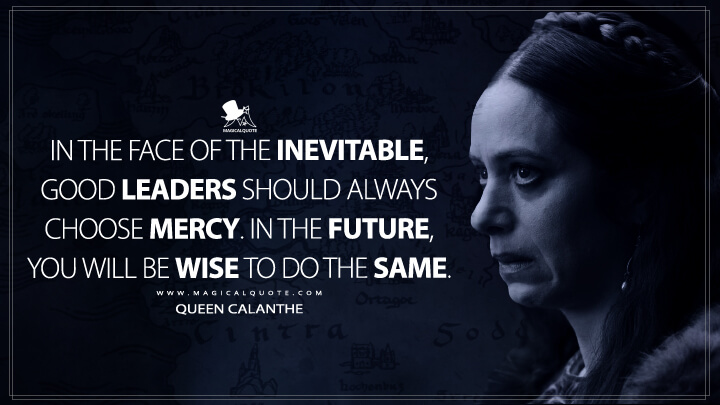 6
In the face of the inevitable, good leaders should always choose mercy. In the future, you will be wise to do the same.Queen Calanthe, (to Cirilla), S1.Ep1: The End's Beginning 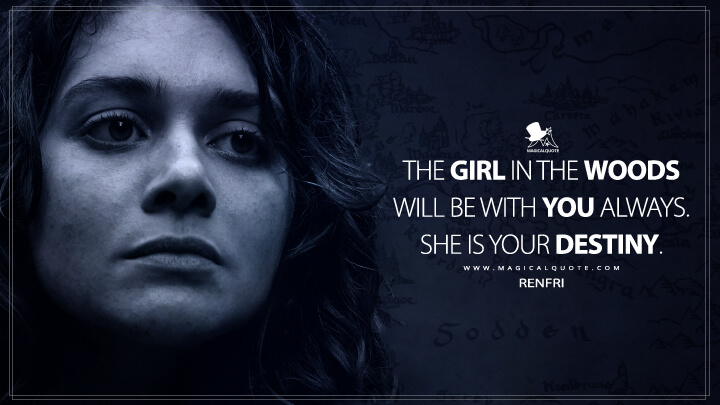 7
The girl in the woods will be with you always. She is your destiny.Renfri, (to Geralt), S1.Ep1: The End's Beginning 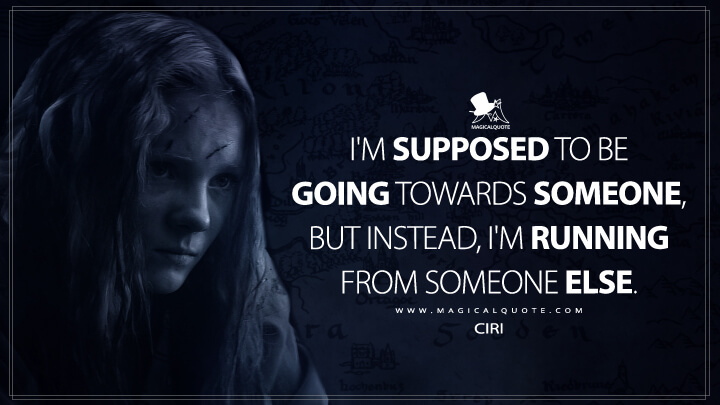 8
I’m supposed to be going towards someone, but instead, I’m running from someone else.Ciri, S1.Ep2: Four Marks 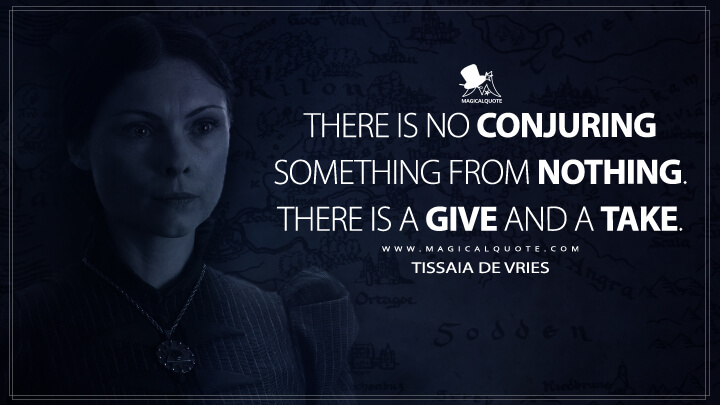 9
There is no conjuring something from nothing. There is a give and a take.Tissaia de Vries, S1.Ep2: Four Marks 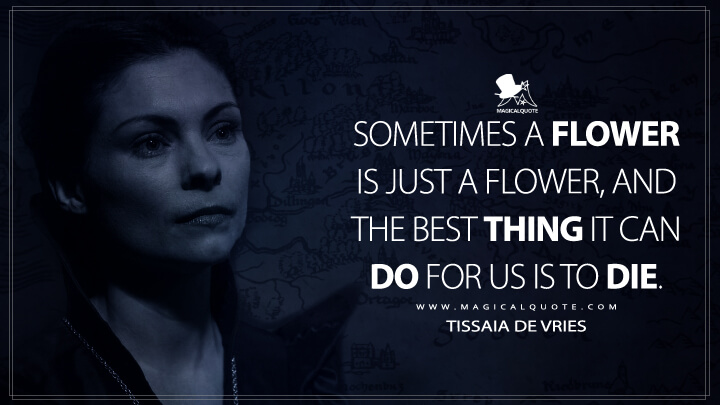 10
Sometimes a flower is just a flower, and the best thing it can do for us is to die.Tissaia de Vries, S1.Ep2: Four Marks 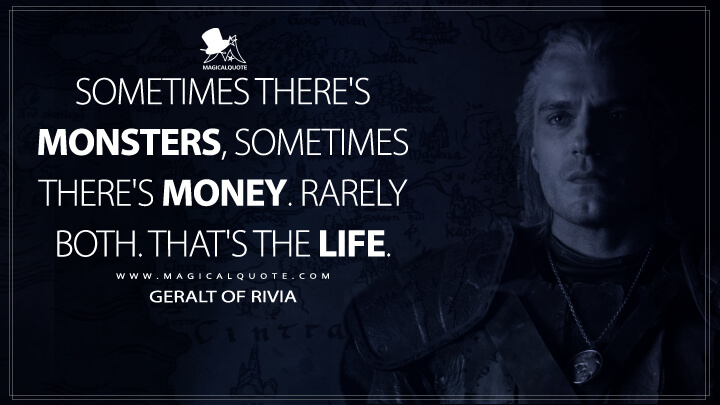 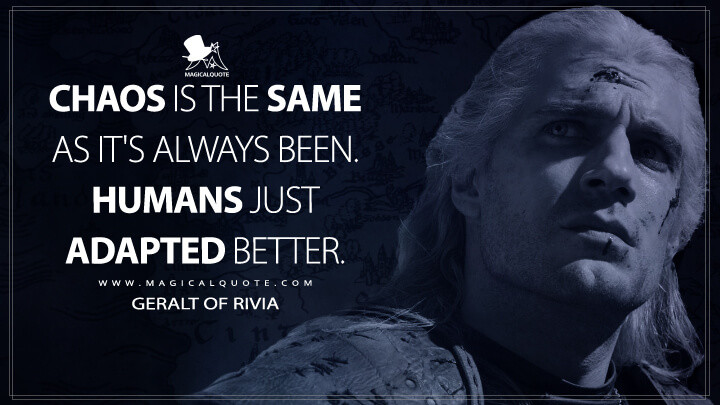 12
Chaos is the same as it’s always been. Humans just adapted better.Geralt of Rivia, (to Filavandrel), S1.Ep2: Four Marks 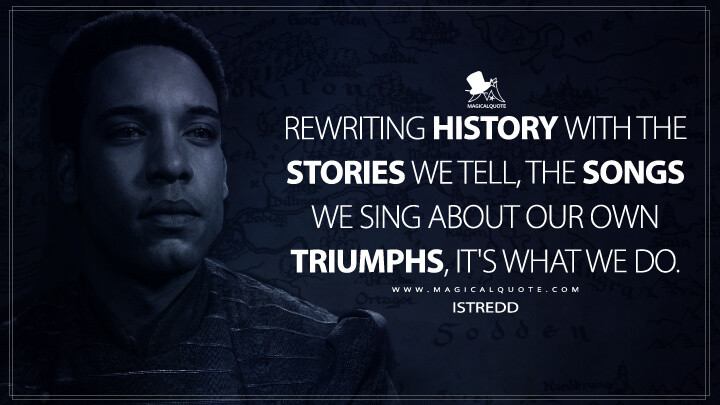 13
Rewriting history with the stories we tell, the songs we sing about our own triumphs, it’s what we do.Istredd, S1.Ep2: Four Marks 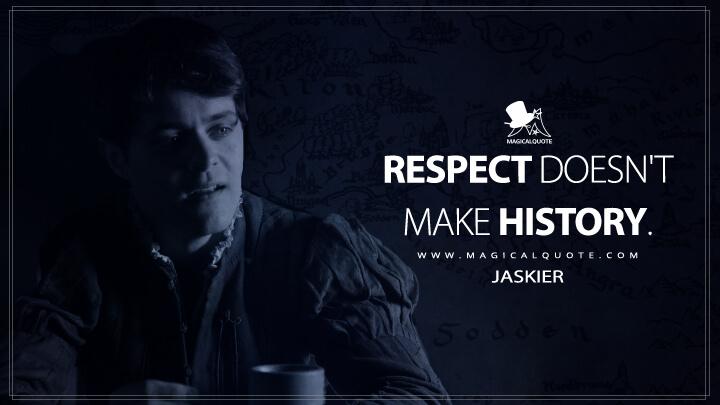 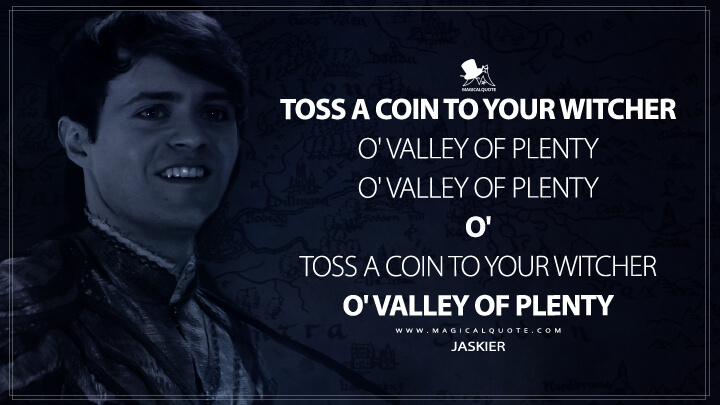 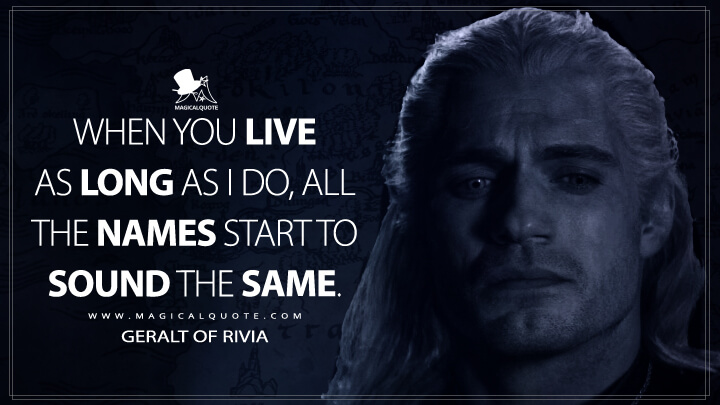 16
When you live as long as I do, all the names start to sound the same.Geralt of Rivia, S1.Ep3: Betrayer Moon 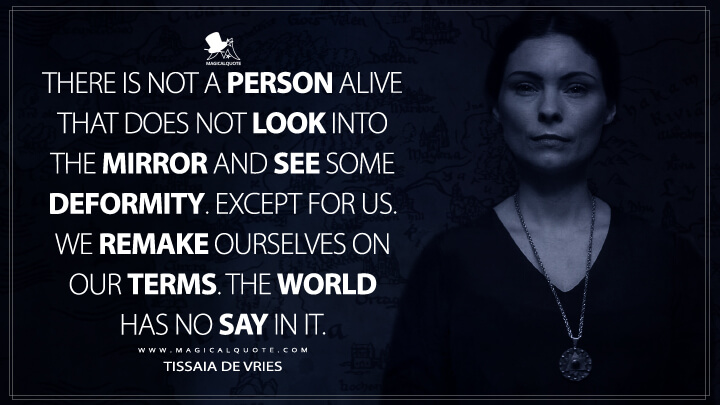 17
There is not a person alive that does not look into the mirror and see some deformity. Except for us. We remake ourselves on our terms. The world has no say in it.Tissaia de Vries, (to Yennefer), S1.Ep3: Betrayer Moon 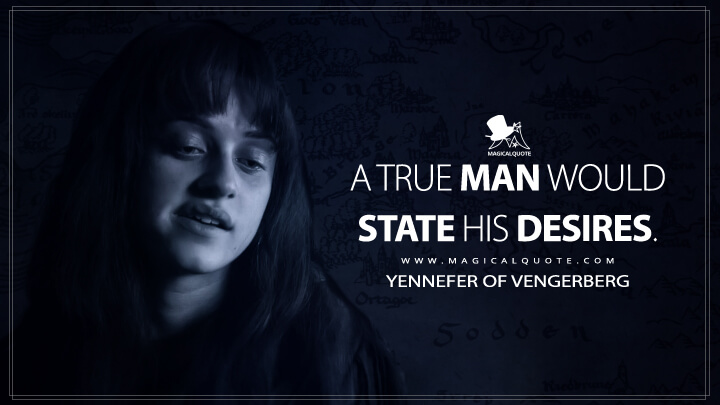 18
A true man would state his desires.Yennefer of Vengerberg, S1.Ep3: Betrayer Moon

19
There is a vortex of fate around all of us, Geralt, growing with each and every one of our choices, drawing our destinies in closer.Triss Merigold, S1.Ep3: Betrayer Moon 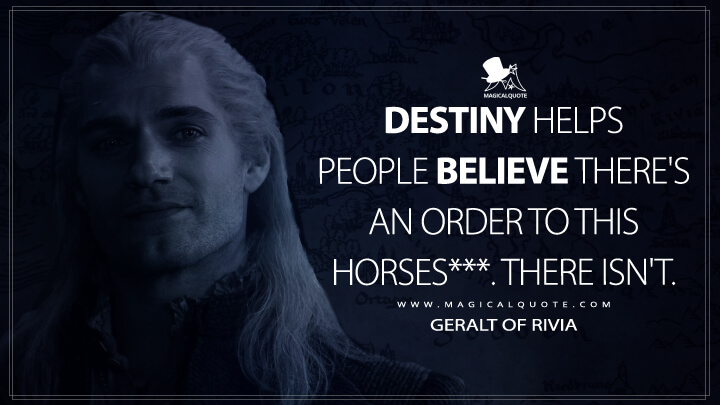 20
Destiny helps people believe there’s an order to this horses***. There isn’t.Geralt of Rivia, S1.Ep4: Of Banquets, Bastards and Burials 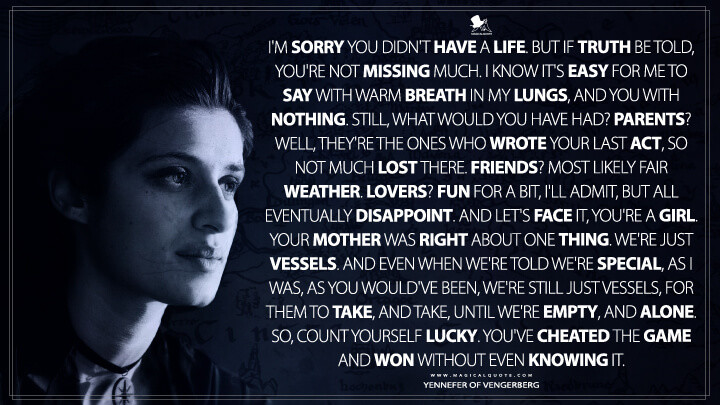 21
I’m sorry you didn’t have a life. But if truth be told, you’re not missing much. I know it’s easy for me to say with warm breath in my lungs, and you with nothing. Still, what would you have had? Parents? Well, they’re the ones who wrote your last act, so not much lost there. Friends? Most likely fair weather. Lovers? Fun for a bit, I’ll admit, but all eventually disappoint. And let’s face it, you’re a girl. Your mother was right about one thing. We’re just vessels. And even when we’re told we’re special, as I was, as you would’ve been, we’re still just vessels, for them to take, and take, until we’re empty, and alone. So, count yourself lucky. You’ve cheated the game and won without even knowing it.Yennefer of Vengerberg, (to a dead baby), S1.Ep4: Of Banquets, Bastards and Burials 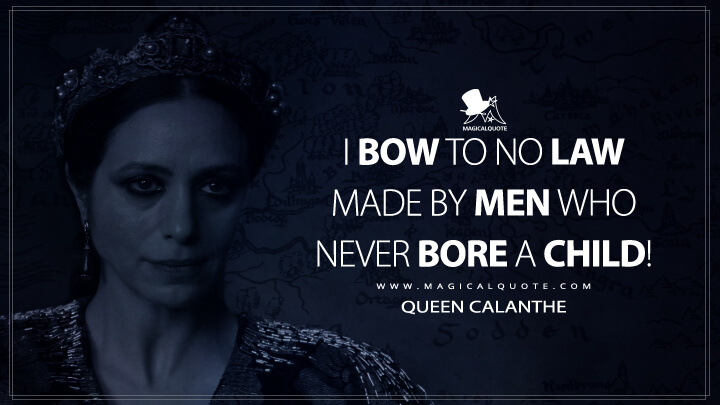 22
I bow to no law made by men who never bore a child!Queen Calanthe, S1.Ep4: Of Banquets, Bastards and Burials 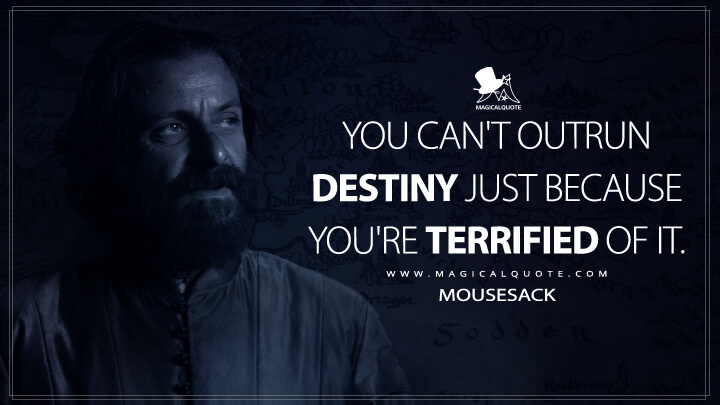 23
You can’t outrun destiny just because you’re terrified of it.Mousesack, S1.Ep4: Of Banquets, Bastards and Burials 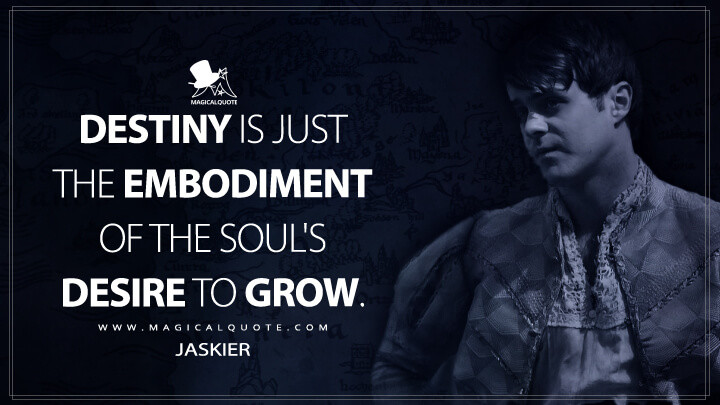 24
Destiny is just the embodiment of the soul’s desire to grow.Jaskier, S1.Ep5: Bottled Appetites 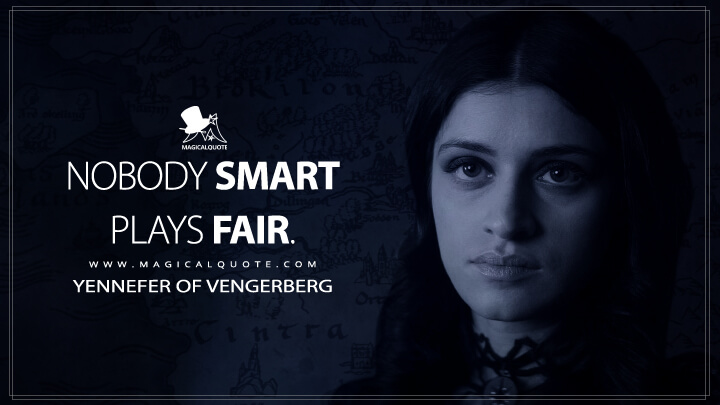 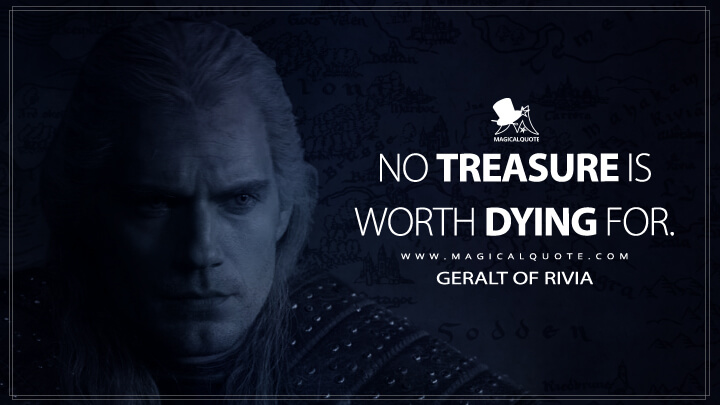 26
No treasure is worth dying for.Geralt of Rivia, S1.Ep6: Rare Species 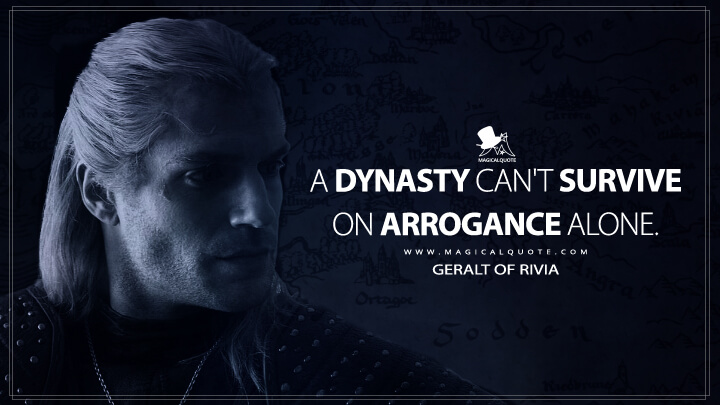 27
A dynasty can’t survive on arrogance alone.Geralt of Rivia, (to Calanthe), S1.Ep7: Before a Fall 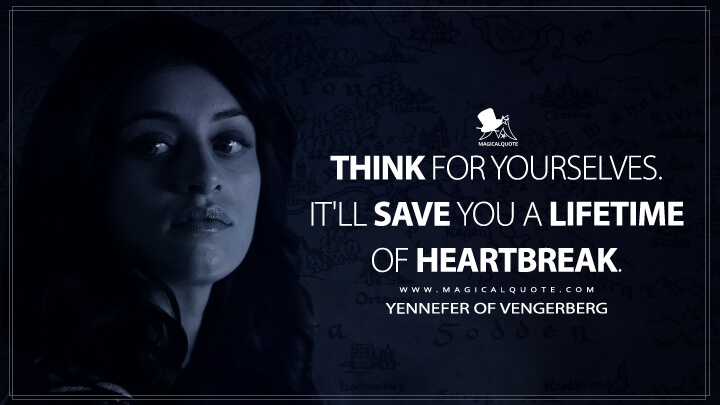 28
Think for yourselves. It’ll save you a lifetime of heartbreak.Yennefer of Vengerberg, S1.Ep7: Before a Fall 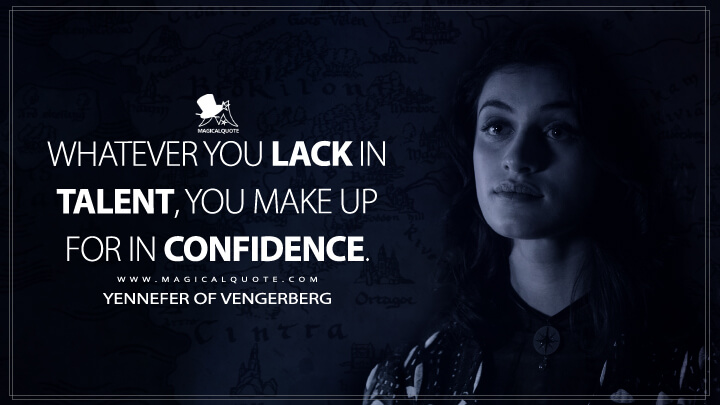 29
Whatever you lack in talent, you make up for in confidence.Yennefer of Vengerberg, S1.Ep7: Before a Fall 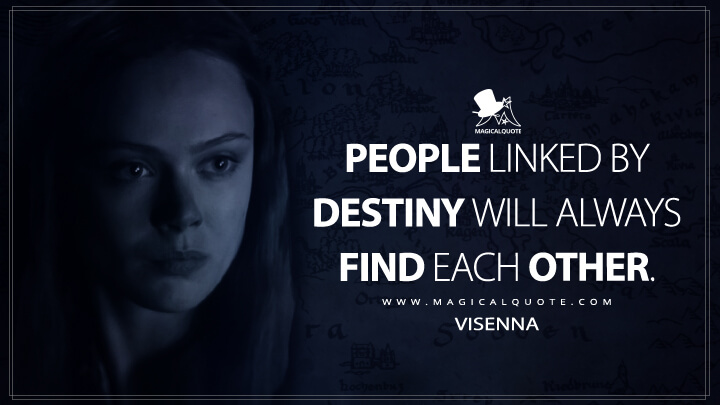 30
People linked by destiny will always find each other.Visenna, S1.Ep8: Much More

SEE ALSO: All quotes from The Witcher

NetflixSeason 1The Witcher
The Best Movie Quotes of the Decade (2010-19) The Best Mandalorian Quotes: This is the Way
Leave a comment