In Praise of Idleness and Other Essays Quotes

One of the commonest things to do with savings is to lend them to some Government. In view of the fact that the bulk of the public expenditure of most civilised Governments consists in payment for past wars or preparation for future wars, the man who lends his money to a Government is in the same position as the bad men in Shakespeare who hire murderers. The net result of the man’s economical habits is to increase the armed forces of the State to which he lends his savings. Obviously it would be better if he spent the money, even if he spent it in drink or gambling.

Source:Essay 1. In Praise of Idleness
Find more on
Do Some Magic!

On the Improvement of the UnderstandingNauseaThe Myth of SisyphusZadigZorba the GreekIn Favor of the Sensitive Man: And Other EssaysManual of the Warrior of LightThe Phenomenology of SpiritWampeters, Foma and Granfalloons 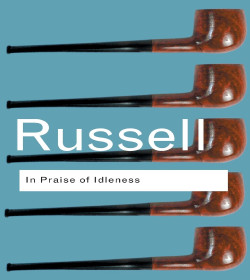