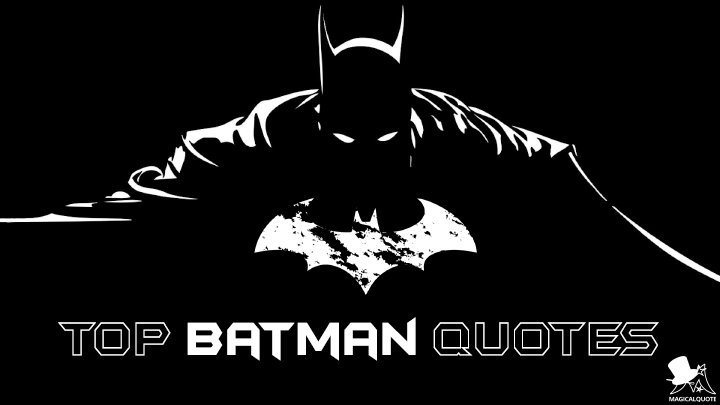 Batman is a superhero and fictional character created by writer Bill Finger and artist Bob Kane in 1939.

After witnessing the murder of his parents, young Bruce Wayne vows to avenge them by declaring war on all criminals. Driven by personal vendetta and a desire for justice, he crafts a bat-inspired persona known as Batman.

As one of the most popular superheroes in the world of movies, many great actors played the role of Batman, including Adam West, Michael Keaton, Val Kilmer, George Clooney, Christian Bale, Ben Affleck, and Robert Pattinson.

Here is our selection of the best Batman movie quotes and sayings. 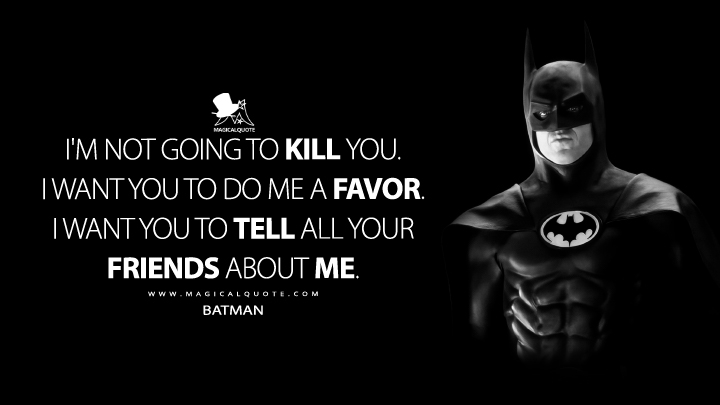 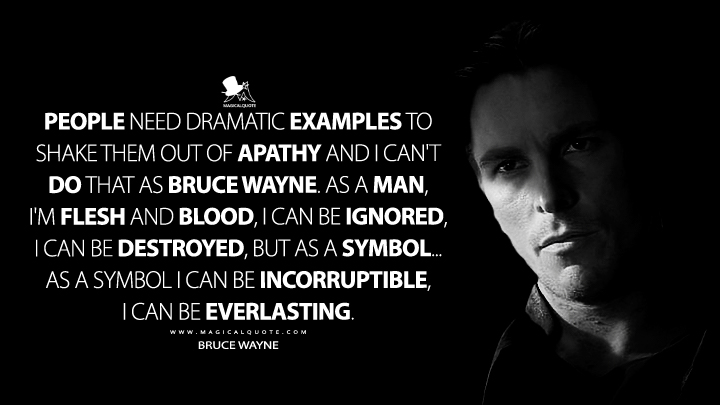 People need dramatic examples to shake them out of apathy and I can’t do that as Bruce Wayne. As a man, I’m flesh and blood, I can be ignored, I can be destroyed, but as a symbol… as a symbol I can be incorruptible, I can be everlasting.Bruce Wayne, Batman Begins (2005) 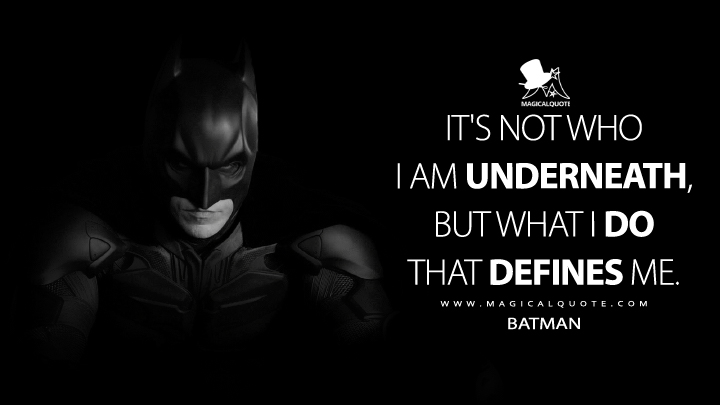 It’s not who I am underneath, but what I do that defines me.Batman, Batman Begins (2005) 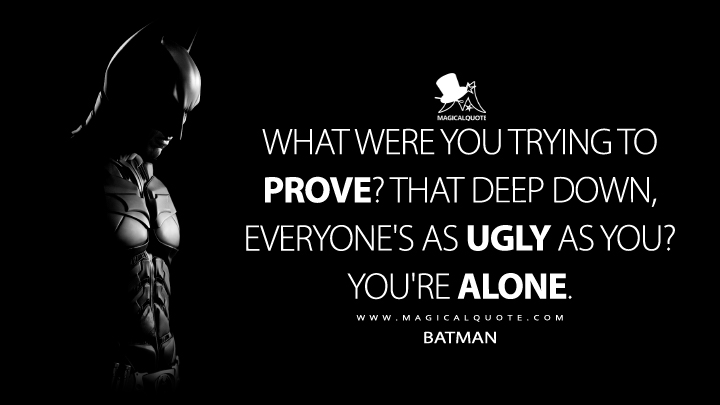 What were you trying to prove? That deep down, everyone’s as ugly as you? You’re alone.Batman, (to Joker), The Dark Knight (2008) 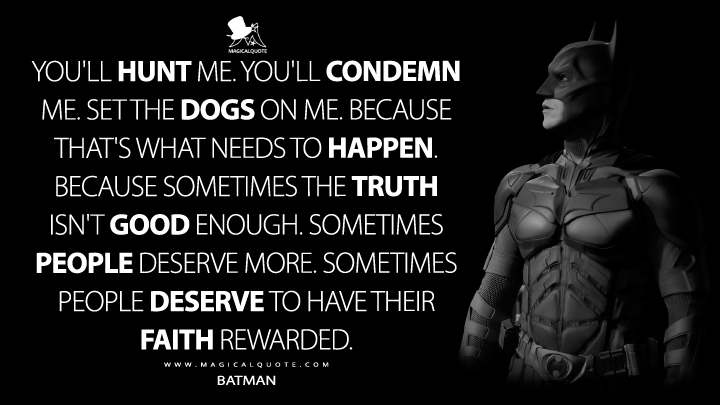 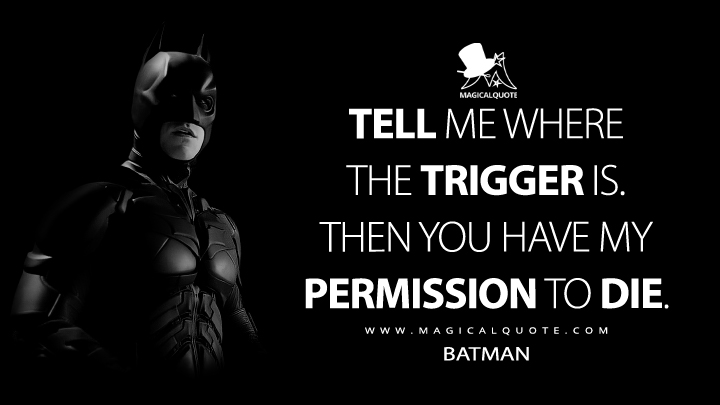 Tell me where the trigger is. Then you have my permission to die.Batman, (to Bane), The Dark Knight Rises (2012) 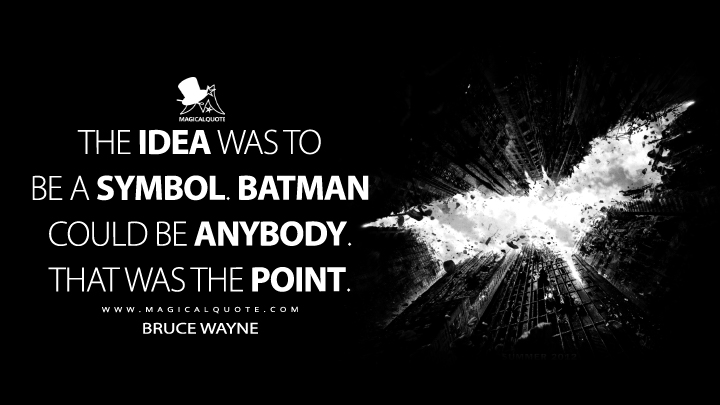 The idea was to be a symbol. Batman could be anybody. That was the point.Bruce Wayne, The Dark Knight Rises (2012) 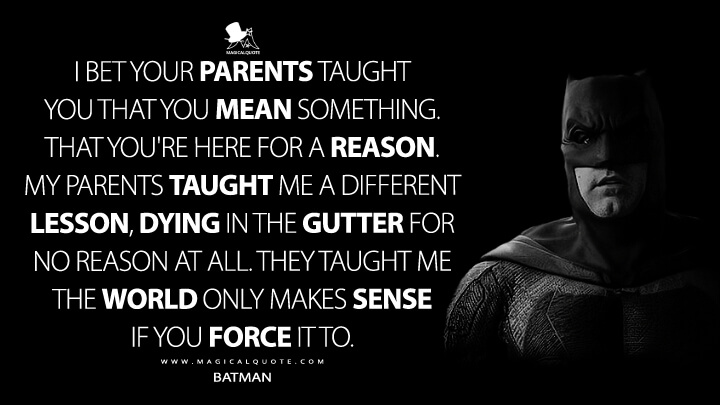 I bet your parents taught you that you mean something. That you’re here for a reason. My parents taught me a different lesson, dying in the gutter for no reason at all. They taught me the world only makes sense if you force it to.Batman, Batman v Superman: Dawn of Justice (2016) 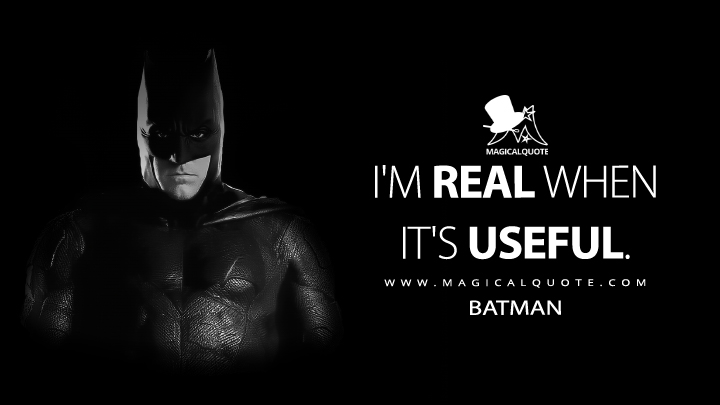 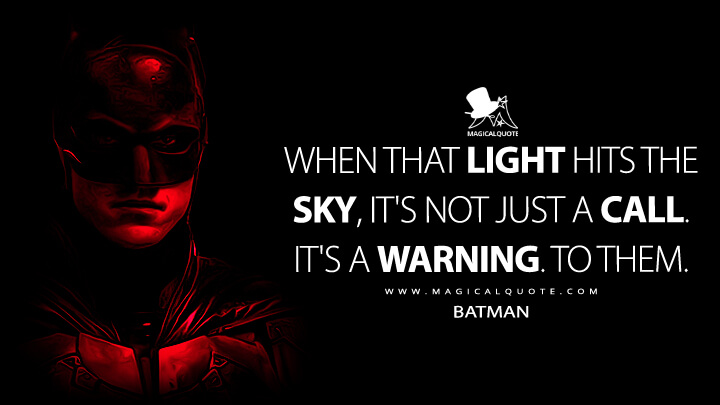 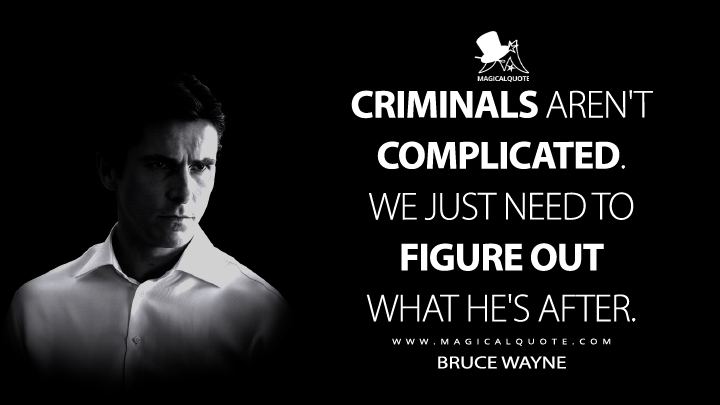 Criminals aren’t complicated. We just need to figure out what he’s after.Bruce Wayne, (to Alfred), The Dark Knight (2008) 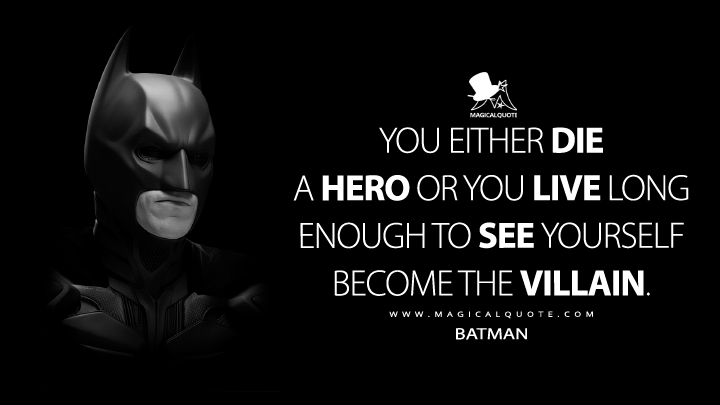 You either die a hero or you live long enough to see yourself become the villain.Batman, The Dark Knight (2008) 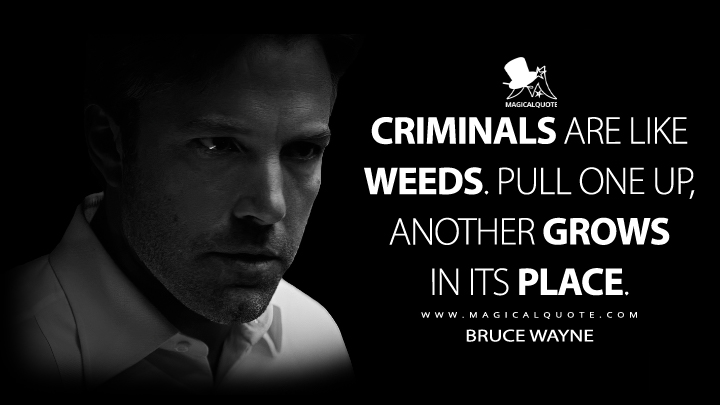 Criminals are like weeds. Pull one up, another grows in its place.Bruce Wayne, (to Alfred), Batman v Superman: Dawn of Justice (2016) 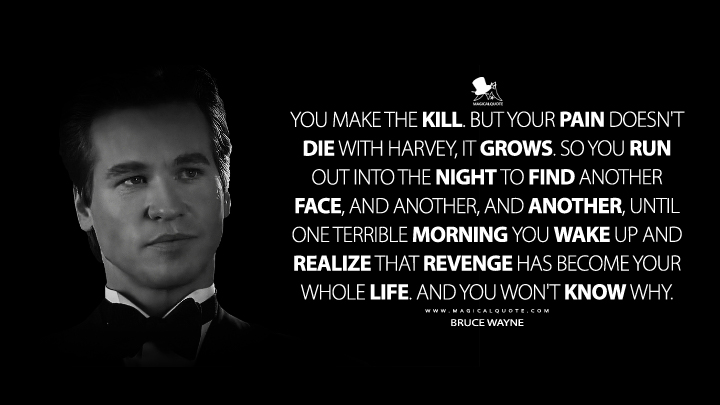 You make the kill. But your pain doesn’t die with Harvey, it grows. So you run out into the night to find another face, and another, and another, until one terrible morning you wake up and realize that revenge has become your whole life. And you won’t know why.Bruce Wayne, (to Dick Grayson), Batman Forever (1995) 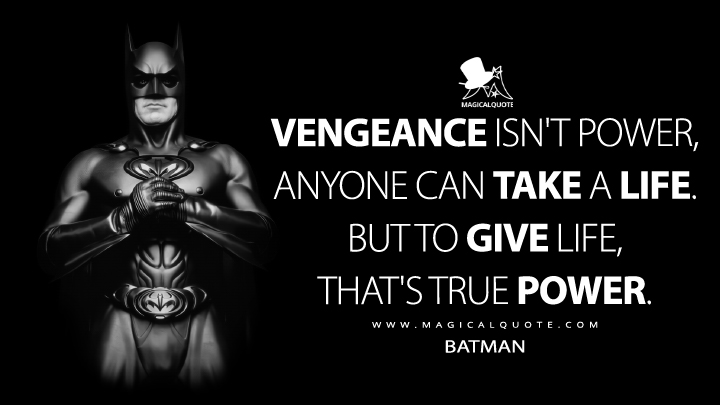 Vengeance isn’t power, anyone can take a life. But to give life, that’s true power.Batman, Batman & Robin (1997) 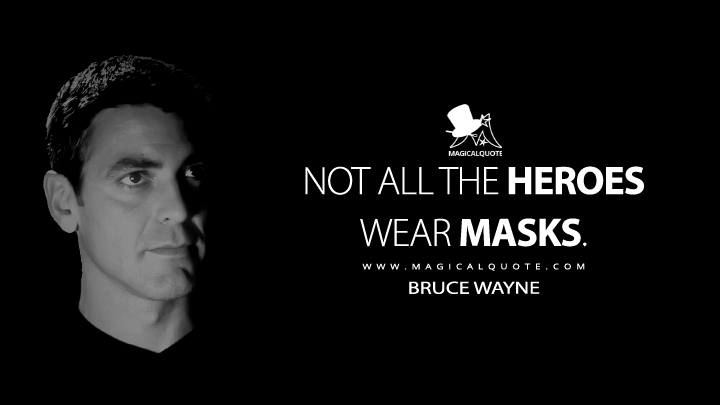 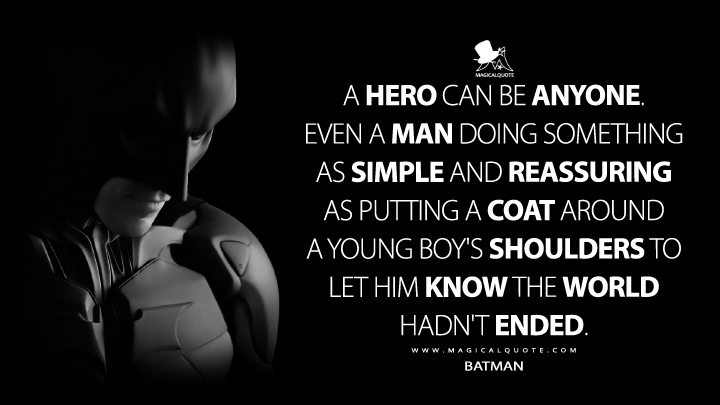 A hero can be anyone. Even a man doing something as simple and reassuring as putting a coat around a young boy’s shoulders to let him know the world hadn’t ended.Batman, The Dark Knight Rises (2012) 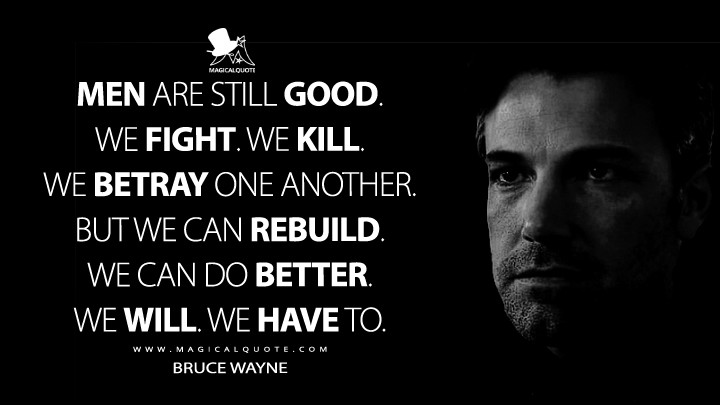 Men are still good. We fight. We kill. We betray one another. But we can rebuild. We can do better. We will. We have to.Bruce Wayne, Batman v Superman: Dawn of Justice (2016) 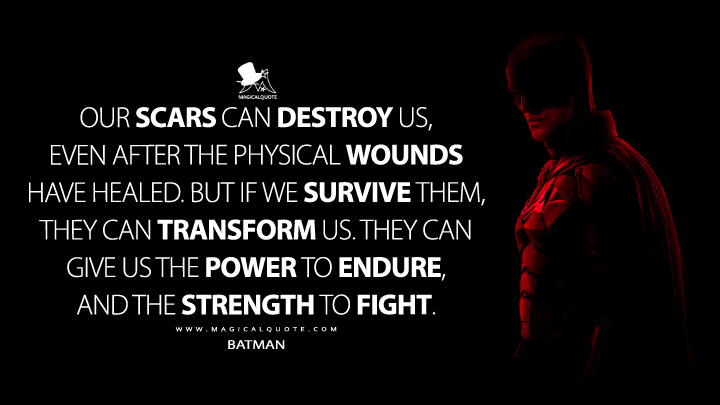 Our scars can destroy us, even after the physical wounds have healed. But if we survive them, they can transform us. They can give us the power to endure, and the strength to fight.Batman, The Batman (2022) 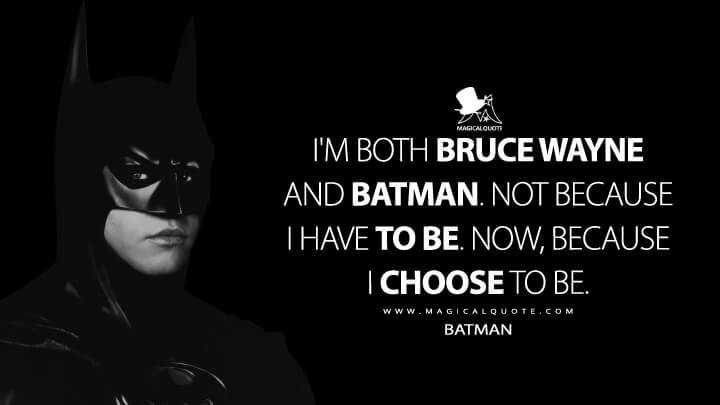 I’m both Bruce Wayne and Batman. Not because I have to be. Now, because I choose to be.Batman, Batman Forever (1995) 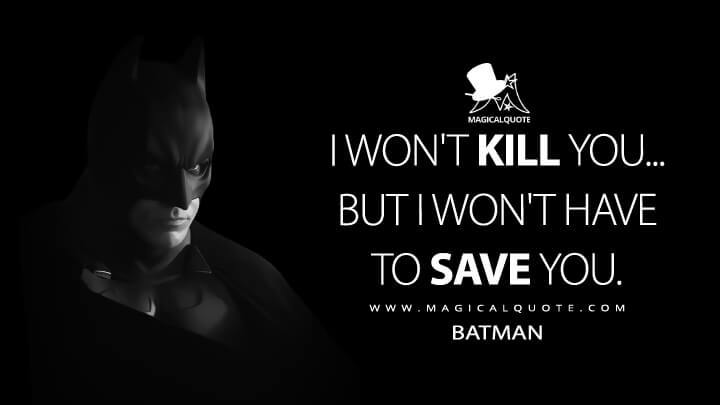 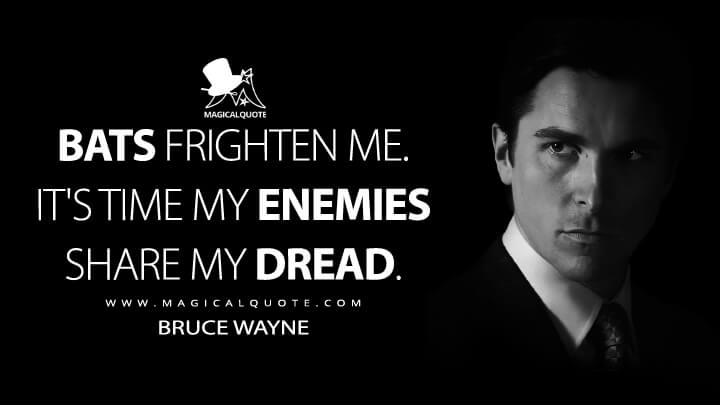 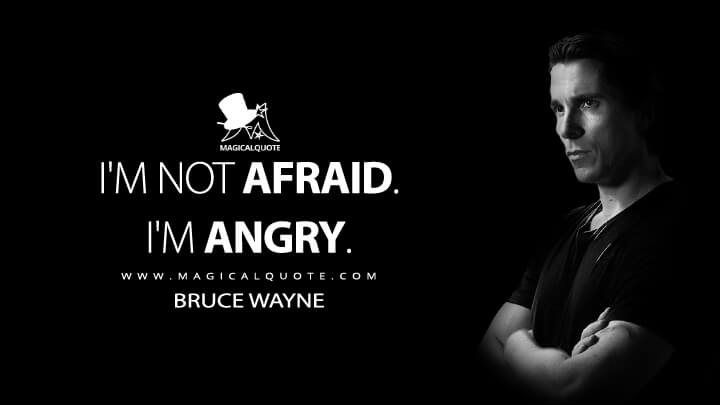 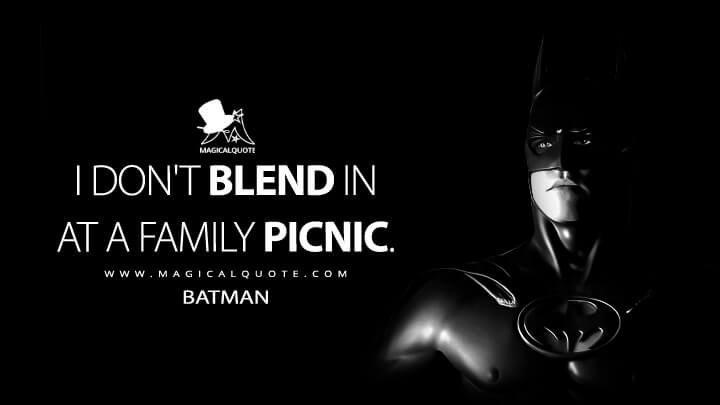 I don’t blend in at a family picnic.Batman, Batman Forever (1995) 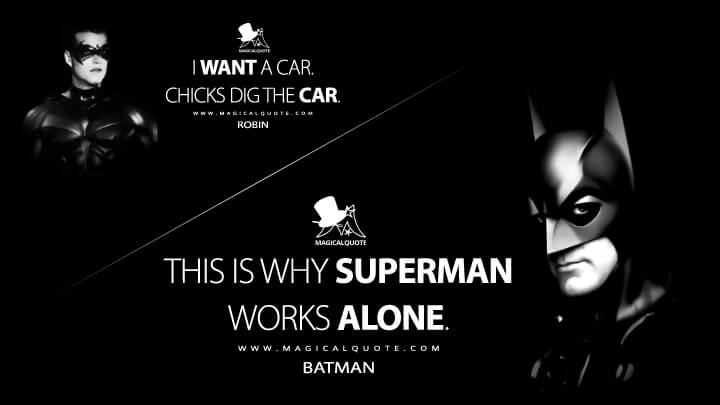 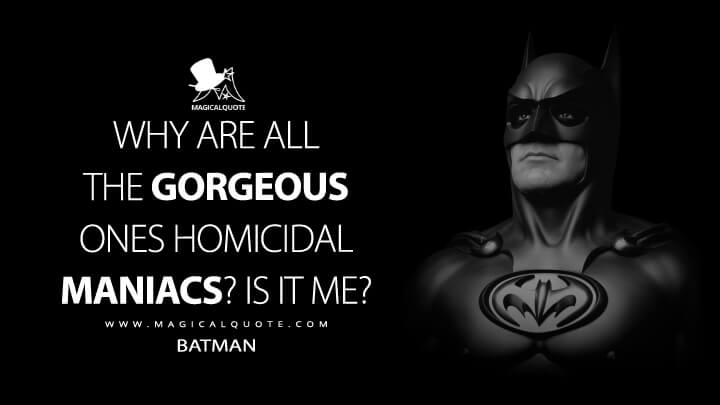 Why are all the gorgeous ones homicidal maniacs? Is it me?Batman, (to Poison Ivy), Batman & Robin (1997) 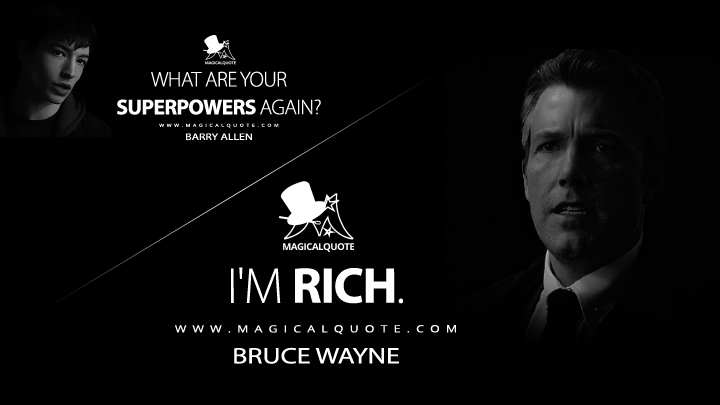 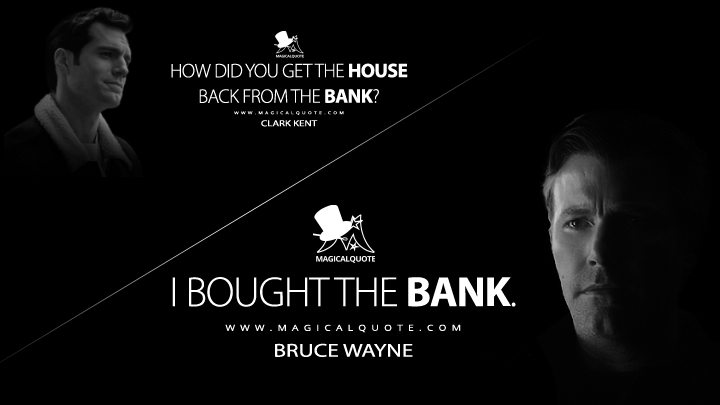 I bought the bank.Bruce Wayne, (Clark Kent: How did you get the house back from the bank?), Justice League (2017)