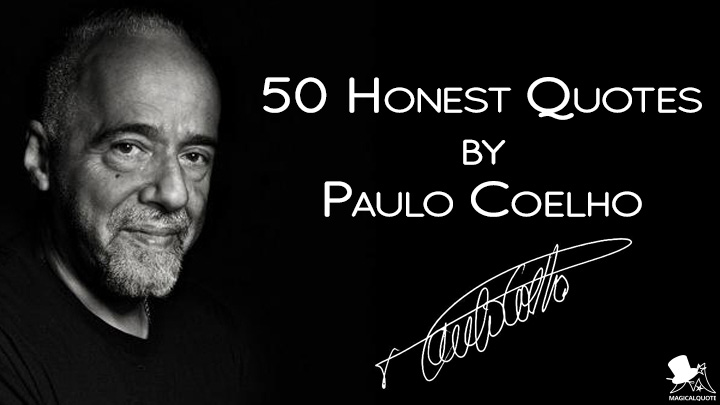 My dream was, and still is, to be a writer. – Paulo Coelho

For those who do not know, Paulo Coelho is a famous Brazilian writer who was born on August 24, 1947, in Rio de Janeiro, Brazil. Before he became one of the most widely read author, he also worked as an actor, lyricist, journalist and theater director.

He has received numerous prestigious awards. The most notable are Crystal Award by the World Economic Forum (1999) and France’s Legion d’Honneur (1999).

Read these 23 quotes and find out what Paulo Coelho thinks on various themes.

Be brave. Take risks. Nothing can substitute experience.Unknown source

Remember your dreams and fight for them. You must know what you want from life. There is just one thing that makes your dream become impossible: the fear of failure.The Telegraph, October 19, 2008

You drown not by falling into a river, but by staying submerged in it.Publishing Tips: Weekly Strategies for the Independent Writer

I cry very easily. It can be a movie, a phone conversation, a sunset – tears are words waiting to be written.The Independent, January 14, 2012

When you write an article about anything, trolls use the comments to attack. They feel frustrated – but haters are losers. It’s not good to feed this aspect. It’s more intelligent to be constructive. Metro, April 18, 2012

Writers are lampposts and critics are dogs. Ask lampposts what they think about dogs. Does the dog hurt the lamppost?The Guardian, March 19, 2009

However happy people say they are, nobody is satisfied:
we always have to be with the prettiest woman, buy a bigger house, change cars, desire what we do not have.Paulo Coelho's Blog, July 17, 2013

Happiness is just another of the tricks that our genetic system plays on us to carry out its only role, which is the survival of the species.Inspired Times Magazine, 2010

I always was a rich person because money’s not related to happiness.The Telegraph, Jun 13, 2005

I’m not saying that love always takes you to heaven. Your life can become a nightmare. But that said, it is worth taking the risk.Beliefnet, Paulo Coelho Dances with Angels

The more violent the storm, the quicker it passes.Daily Mail, February 19, 2012

I think you can have 10,000 explanations for failure, but no good explanation for success.The New York Times, September 26, 2011

We have lost contact with reality, the simplicity of life.The Guardian, March 19, 2009

The good old days, when each idea had an owner, are gone forever.The Guardian, February 1, 2012

You’re always learning. The problem is, sometimes you stop and think you understand the world. This is not correct. The world is always moving. You never reach the point you can stop making an effort.Metro, April 18, 2012

We must not confuse humility with false modesty or servility.Daily Mail, February 26, 2012

Physical elegance comes from the body. This is no superficial matter but rather the way that man found to honour the way he places his two feet on the ground. Daily Mail, March 4, 2012

The gigantic tension before the shooting of an arrow, and the total relaxation seconds later, is my way of connecting to the universe.The Independent, January 14, 2012

I can control my destiny, but not my fate. Destiny means there are opportunities to turn right or left, but fate is a one-way street. I believe we all have the choice as to whether we fulfil our destiny, but our fate is sealed.The Guardian, January 25, 2014

The more in harmony with yourself you are, the more joyful you are, and the more faithful you are. Faith is not to disconnect you from reality, it connects you to reality.The Guardian, March 17, 2013

Life was always a matter of waiting for the right moment to act.Paulo Coelho's Blog, April 22, 2009

What is your favorite book from Paulo Coelho?