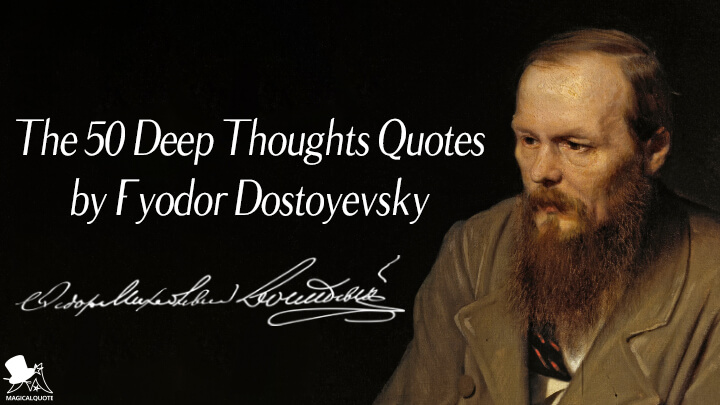 Fyodor Mikhailovich Dostoyevsky (November 11, 1821 – February 9, 1881), often transliterated and uttered as Dostoevsky, was famous Russian novelist and short story writer. His works explore human psychology in the context of the troubled political and social atmosphere, and he is often acknowledged by critics as one of the greatest and most prominent psychologists in world literature.

Dostoyevsky’s works of fiction include 2 translations, 15 novels and novellas, and 17 short stories. The most important are Crime and Punishment (1866), The Idiot (1869), Demons (1872) and The Brothers Karamazov (1880). His novella Notes from Underground (1864), which is named the “best overture for existentialism ever written” by Walter Kaufmann, is considered one of the first works of existentialist literature.

With his work, which has been translated into 170 languages, Dostoyevsky influenced many great writers and philosophers such as Anton Chekhov, Ernest Hemingway and Friedrich Nietzsche.

In honor of his birthday, here are 50 best quotes from his papers.

Destroy my desires, wipe out my ideals, show me something better, and I will follow you.Notes From Underground (1864)

With love one can live even without happiness.Notes From Underground (1864)

Lying is a delightful thing for it leads to the truth.Crime and Punishment (1866)

Civilization has made man, if not always more bloodthirsty, at least more viciously, more horribly bloodthirsty.Notes From Underground (1864)

The best definition of man is: a being that walks on two legs and is ungrateful.Notes From Underground

If they drive God from the earth, we shall shelter Him underground.The Brothers Karamazov (1880)

The more I love humanity in general, the less I love man in particular.The Brothers Karamazov (1880)

What is hell? I maintain that it is the suffering of being unable to love.The Brothers Karamazov (1880)

The soul is healed by being with children…The Idiot (1869)

Sarcasm; normally this usually is the last refuge of modest and chaste-souled people when the privacy of their soul is coarsely and intrusively invaded.Notes From Underground (1864)

One can know a man from his laugh, and if you like a man’s laugh before you know anything of him, you may confidently say that he is a good man.The House of the Dead (1862)

Happiness lies not in happiness but only in the attempt to achieve it.A Writer's Diary (1873-1881)

Much unhappiness has come into the world because of bewilderment and things left unsaid.Critical Articles, Complete Collected Works

Man is fond of reckoning his troubles, but he does not count his joys. If he counted them up as he ought, he would see that every lot has enough happiness provided for it.Notes From Underground (1864)

Man only likes to count his troubles; he doesn’t calculate his happiness.Notes From Underground (1864)

To live without Hope is to Cease to live.Unknown source

It seems, in fact, as though the second half of a man’s life is usually made up of nothing, but the habits he has accumulated during the first half.Demons (The Possessed) (1872)

Above all, don’t lie to yourself. The man who lies to himself and listens to his own lie comes to such a pass that he cannot distinguish the truth within him, or around him, and so loses all respect for himself and for others. And having no respect he ceases to love.The Brothers Karamazov (1880)

Pain and suffering are always inevitable for a large intelligence and a deep heart.Crime and Punishment (1866)

Talking nonsense is the sole privilege mankind possesses over the other organisms.Notes From Underground (1864)

To go wrong in one’s own way is better than to go right in someone else’s.Crime and Punishment (1866)

People speak sometimes about the “bestial” cruelty of man, but that is terribly unjust and offensive to beasts, no animal could ever be so cruel as a man, so artfully, so artistically cruel.Unknown source

Man is a mystery. One must solve it. If you spend your entire life trying to puzzle it out, then do not say that you have wasted your time. I occupy myself with this mystery, because I want to be a man.Dostoevsky: His Life and Work by Konstantin Mochulsky

Right or wrong, it’s very pleasant to break something from time to time.Unknown source

Taking a new step, uttering a new word is what they fear most…Crime and Punishment (1866)

Nothing in the world is harder than speaking the truth and nothing easier than flattery.Crime and Punishment (1866)

Power is only vouchsafed to the man who dares to stoop and pick it up. There is only one thing, one thing needful: one has only to dare!Crime and Punishment (1866)

To love someone means to see him as God intended him.Unknown source

Realists do not fear the results of their study.Unknown source

So long as man remains free he strives for nothing so incessantly and so painfully as to find some one to worship.The Brothers Karamazov (1880)

If there were no God, he would have to be invented.The Brothers Karamazov (1880)

There is no subject so old that something new cannot be said about it.A Writer's Diary (1873-1881)

If you want to be respected by others, the great thing is to respect yourself.The Insulted and the Injured (Humiliated and Insulted) (1861)

Beauty would save the world.The Idiot (1869)

A fool with a heart and no brains is just as unhappy as a fool with brains and no heart.The Idiot (1869)

On our earth we can love truly only with suffering and through suffering!The Dream of a Ridiculous Man (1877)

It is not the brains that matter most, but that which guides them – the character, the heart, generous qualities, progressive ideas.The Insulted and the Injured (Humiliated and Insulted) (1861)

You can be sincere and still be stupid.Unknown source

To be a human among human beings, and remain one forever,no matter what misfortunes befall, not to become depressed, and not to falter – this is what life is, herein lies its task.Dostoevsky: His Life and Work by Konstantin Mochulsky

Life is in ourselves and not in the external.writes Fyodor Dostoevsky in a letter to his brother dated December 22, 1849

Nothing is more seductive for a man than his freedom of conscience, but nothing is a greater cause of suffering.The Brothers Karamazov (1880)

Atheism: It seeks to replace in itself the moral power of religion, in order to appease the spiritual thirst of parched humanity and save it; not by Christ, but by force.The Idiot (1869)

Love a man even in his sin, for that is the semblance of Divine Love and is the highest love on earth.The Brothers Karamazov (1880)

For the secret of man’s being is not only to live but to have something to live for.The Brothers Karamazov (1880)

Lying to ourselves is more deeply ingrained than lying to others.Unknown source

Without some goal and some effort to reach it, no man can live.The House of the Dead (1862)

Men reject their prophets and slay them, but they love their martyrs and honor those whom they have slain.The Brothers Karamazov (1880)

Man is unhappy because he doesn’t know he’s happy. It’s only that.Demons (The Possessed) (1872)