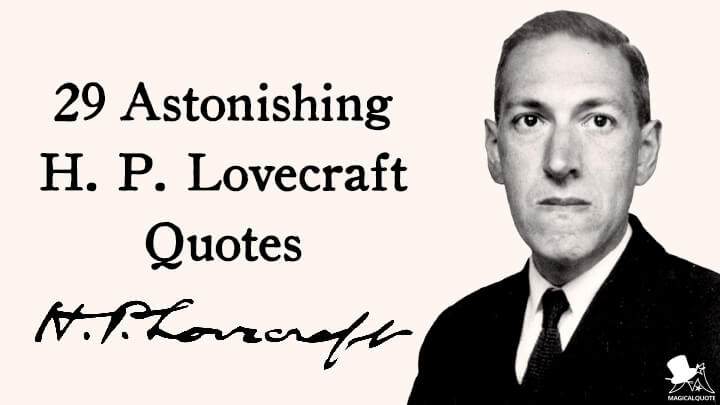 He wrote short stories, macabre short novels and novellas. Among his most celebrated works are The Call of Cthulhu (1928), The Shadow Out of Time (1935), The Dream-Quest of Unknown Kadath (1943), and The Case of Charles Dexter Ward (1941).

Lovecraft spent most of his life in isolation and poverty. His fame and reputation have grown steadily over the years after his death. He is now commonly considered, along with Edgar Allan Poe, to be one of the greatest and most influential horror writers. 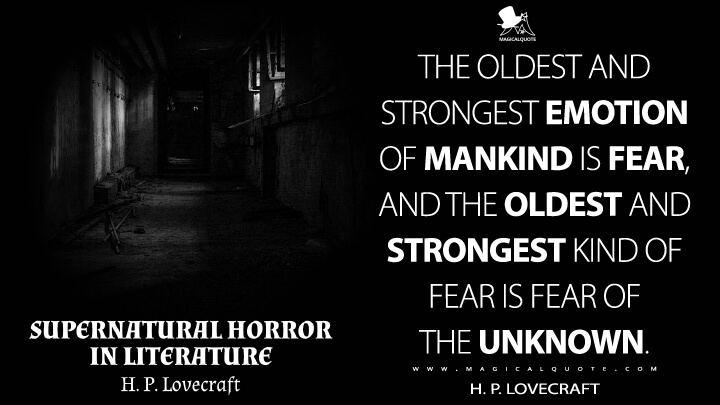 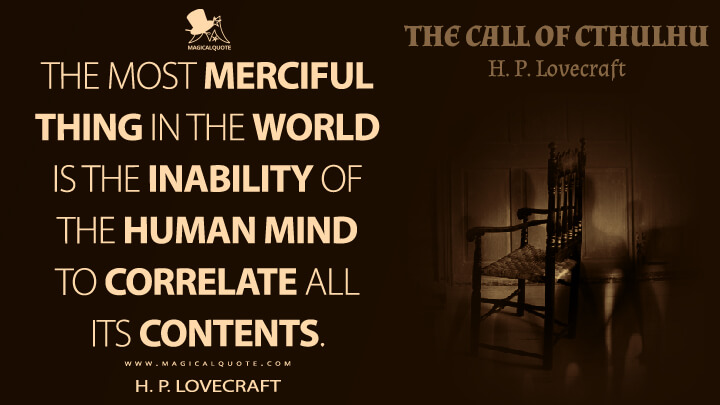 The most merciful thing in the world is the inability of the human mind to correlate all its contents.The Call of Cthulhu (February 1928) 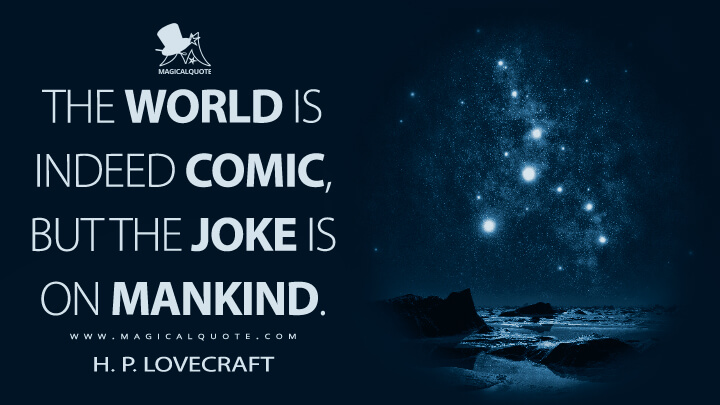 The world is indeed comic, but the joke is on mankind.In Defence of Dagon (The Defence Remains Open!) (April 1921) 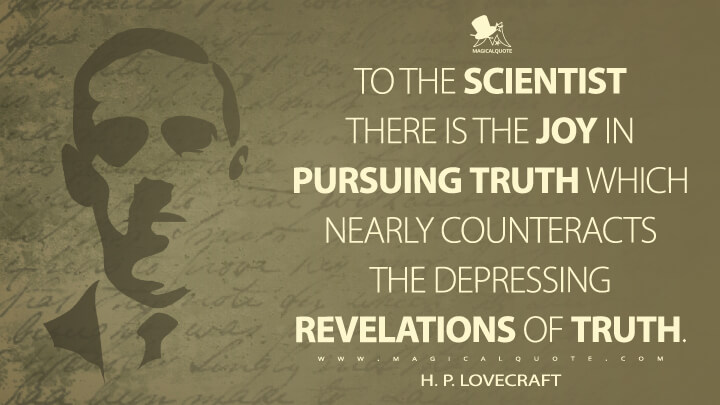 To the scientist there is the joy in pursuing truth which nearly counteracts the depressing revelations of truth.Letter to 'The Keicomolo'— Kleiner, Cole, and Moe (October 1916) 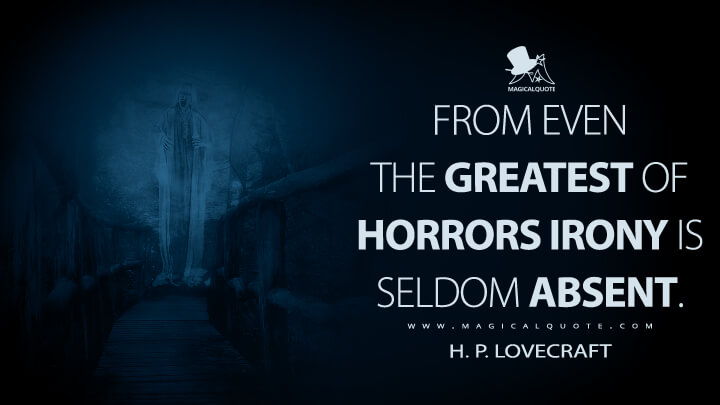 From even the greatest of horrors irony is seldom absent.The Shunned House (October 1937) 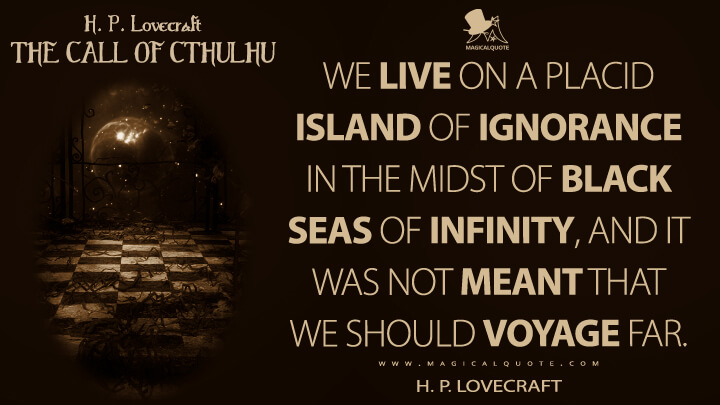 We live on a placid island of ignorance in the midst of black seas of infinity, and it was not meant that we should voyage far.The Call of Cthulhu (February 1928) 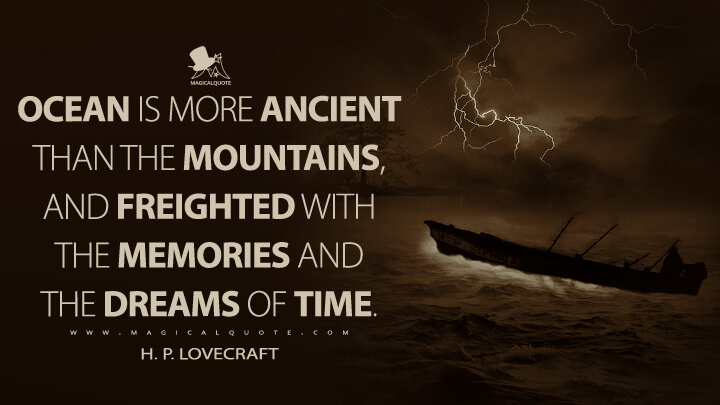 Ocean is more ancient than the mountains, and freighted with the memories and the dreams of Time.The White Ship (November 1919) 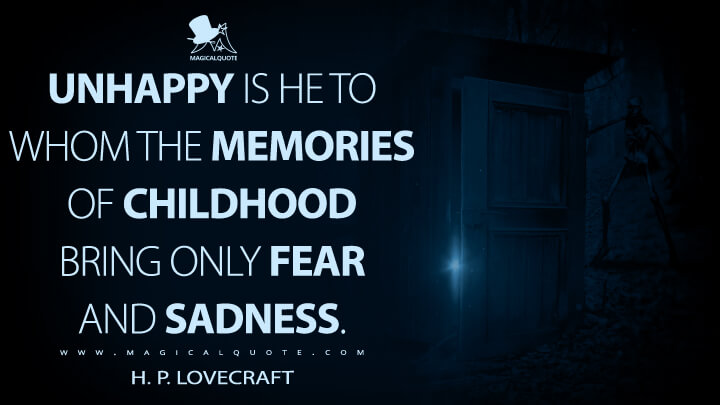 Unhappy is he to whom the memories of childhood bring only fear and sadness.The Outsider (April 1926) 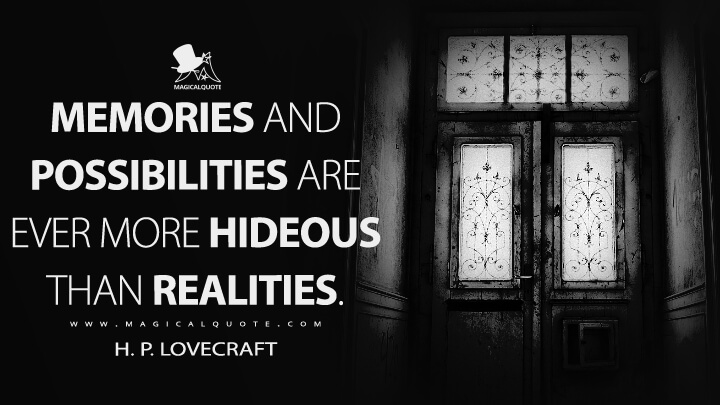 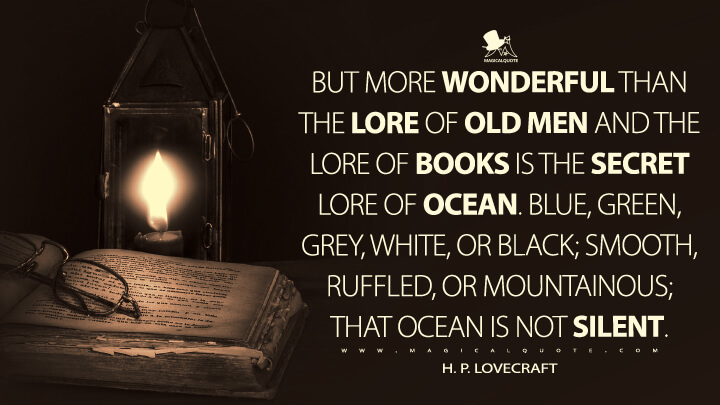 But more wonderful than the lore of old men and the lore of books is the secret lore of ocean. Blue, green, grey, white, or black; smooth, ruffled, or mountainous; that ocean is not silent.The White Ship (November 1919)

It is good to be a cynic—it is better to be a contented cat — and it is best not to exist at all.'Nietzscheism and Realism,' from The Rainbow, Vol. I, No. 1 (October 1921) 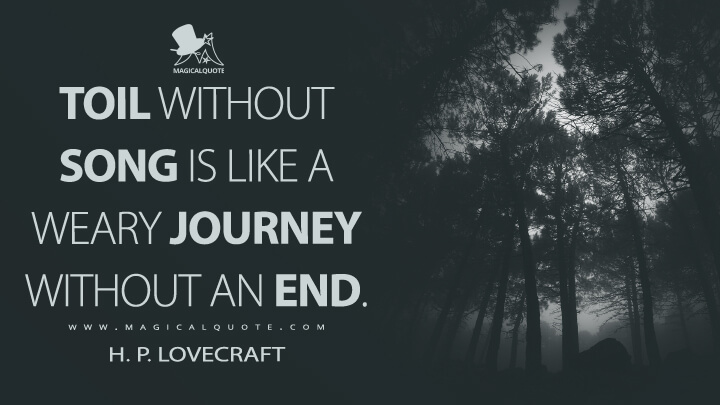 Toil without song is like a weary journey without an end.The Quest of Iranon (July-August 1935) 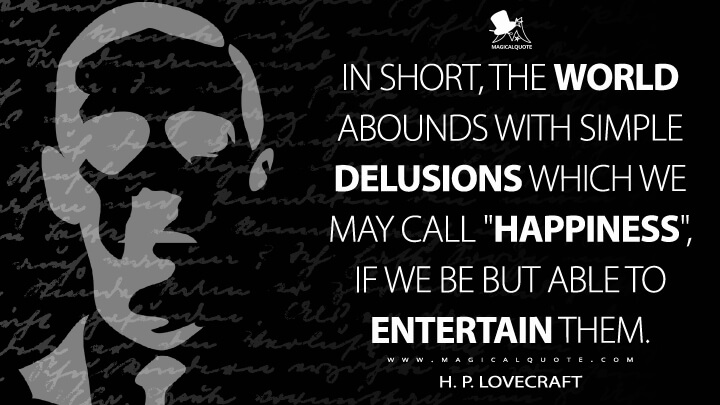 In short, the world abounds with simple delusions which we may call “happiness”, if we be but able to entertain them.Letter to 'The Keicomolo'— Kleiner, Cole, and Moe (October 1916) 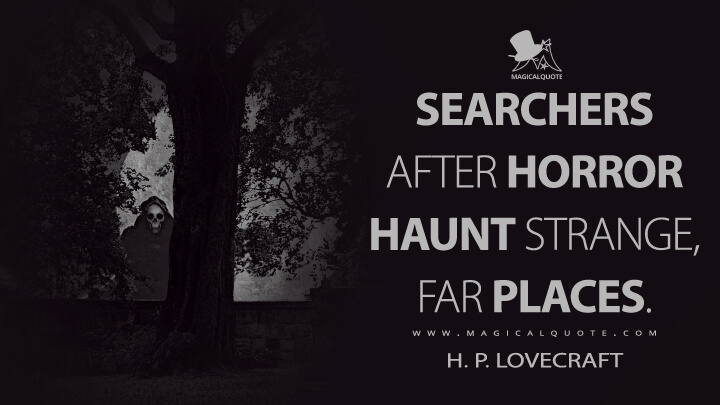 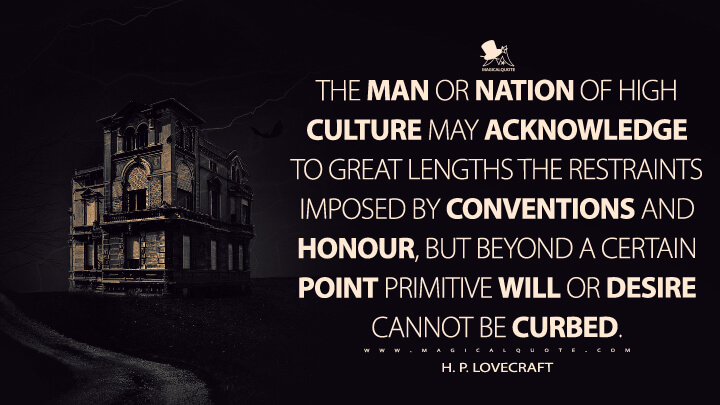 The man or nation of high culture may acknowledge to great lengths the restraints imposed by conventions and honour, but beyond a certain point primitive will or desire cannot be curbed.At the Root (July 1918) 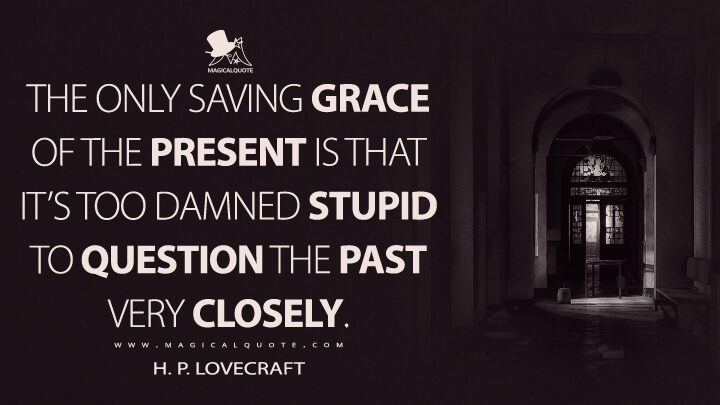 The only saving grace of the present is that it’s too damned stupid to question the past very closely.Pickman's Model (1927) 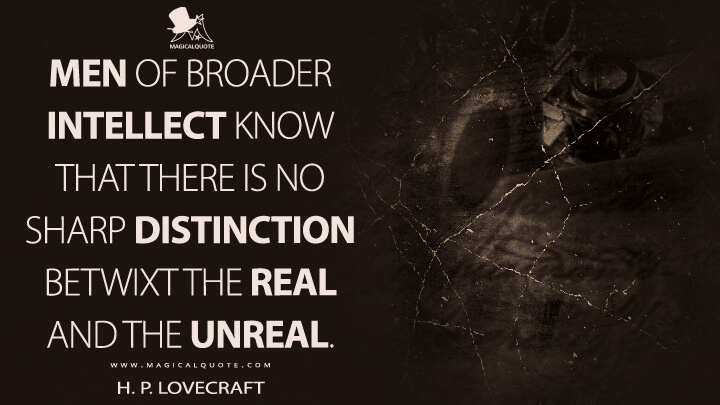 Men of broader intellect know that there is no sharp distinction betwixt the real and the unreal.The Tomb (March 1922) 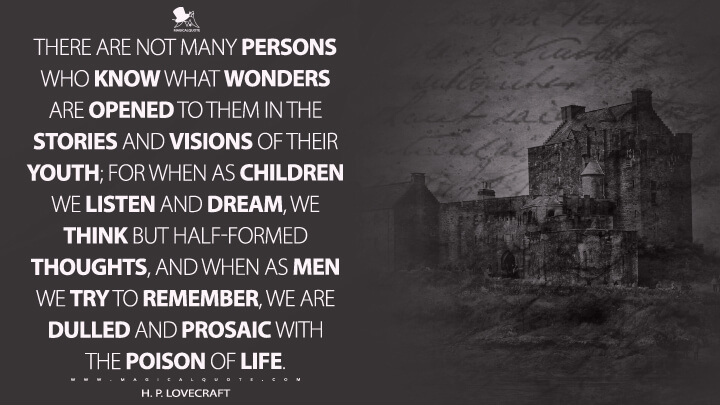 There are not many persons who know what wonders are opened to them in the stories and visions of their youth; for when as children we listen and dream, we think but half-formed thoughts, and when as men we try to remember, we are dulled and prosaic with the poison of life.Celephaïs (May 1922) 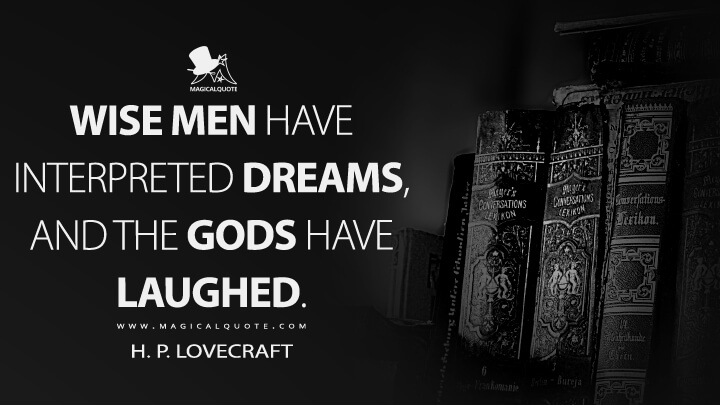 Wise men have interpreted dreams, and the gods have laughed.Hypnos (May 1923) 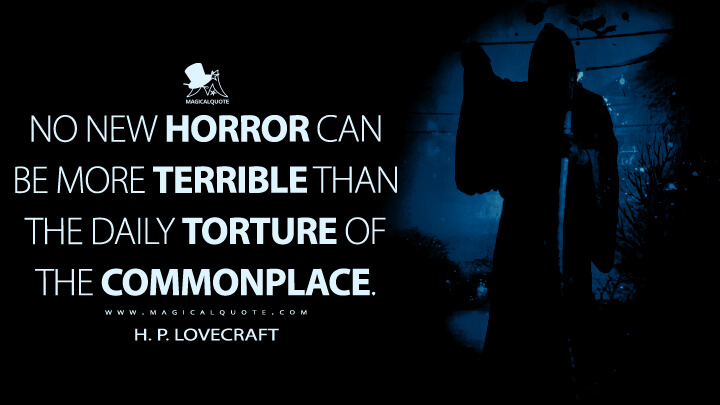 No new horror can be more terrible than the daily torture of the commonplace.Ex Oblivione (1921) 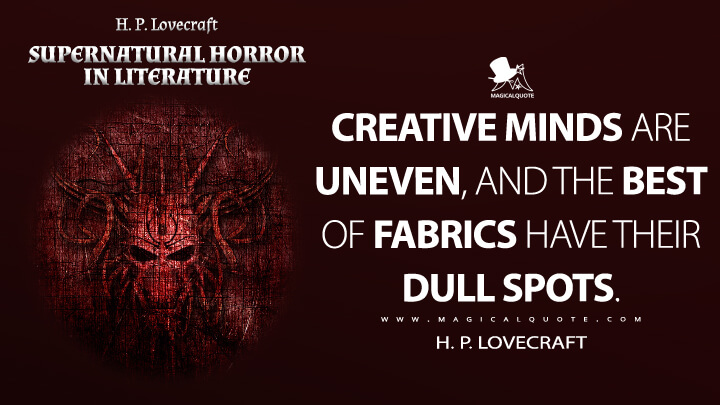 Creative minds are uneven, and the best of fabrics have their dull spots.'Chapter I: Introduction,' Supernatural Horror in Literature (1927) 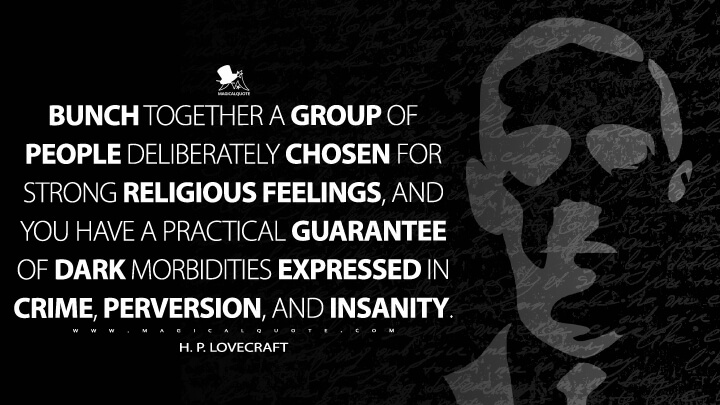 Bunch together a group of people deliberately chosen for strong religious feelings, and you have a practical guarantee of dark morbidities expressed in crime, perversion, and insanity.Letter to Robert E. Howard, (October 4, 1930) 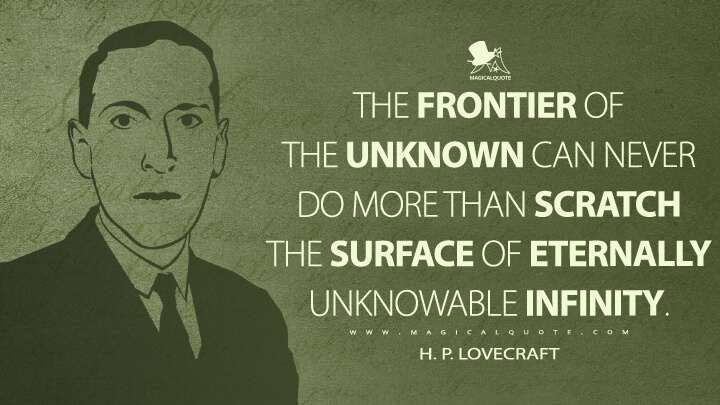 The frontier of the unknown can never do more than scratch the surface of eternally unknowable infinity. Letter to Clark Ashton Smith (October 17, 1930) 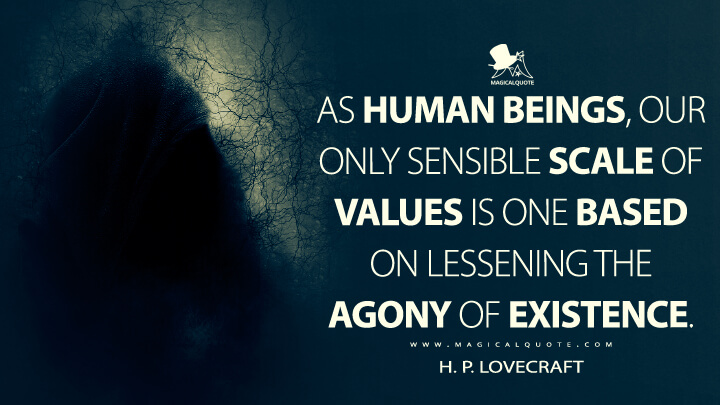 As human beings, our only sensible scale of values is one based on lessening the agony of existence.'Nietzscheism and Realism' from The Rainbow, Vol. I, No. 1 (October 1921) 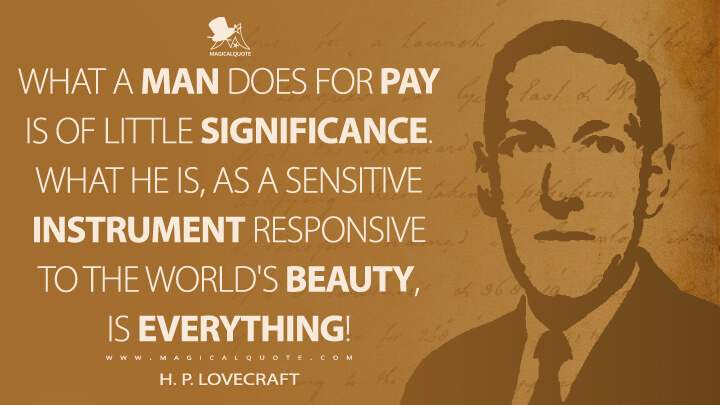 What a man does for pay is of little significance. What he is, as a sensitive instrument responsive to the world’s beauty, is everything!Selected Letters of H. P. Lovecraft II (1925–1929) 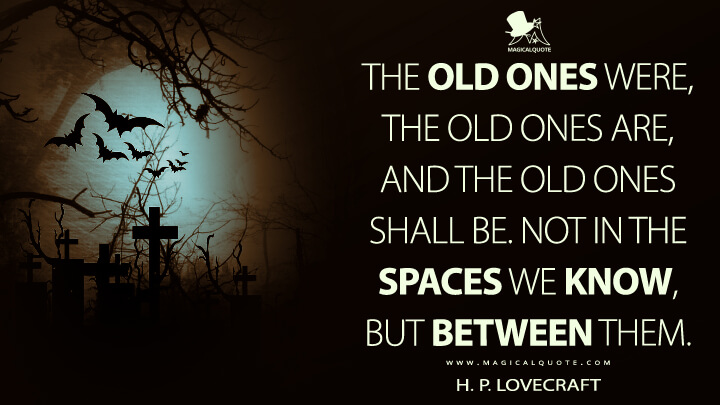 The Old Ones were, the Old Ones are, and the Old Ones shall be. Not in the spaces we know, but between them.The Dunwich Horror (April, 1929) 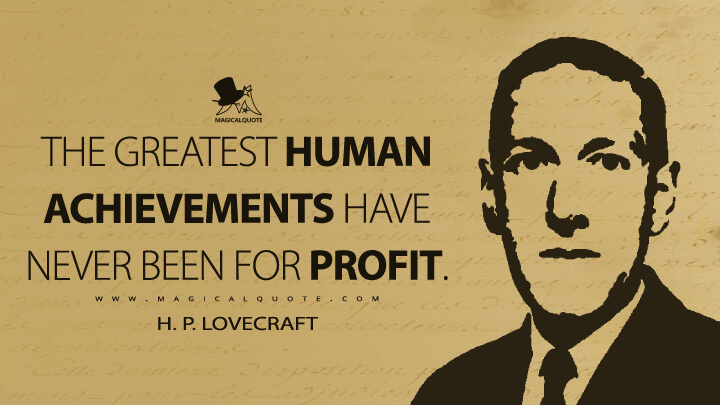 The greatest human achievements have never been for profit.Unpublished (and probably unsent) letter to the Providence Journal (April 13, 1934) 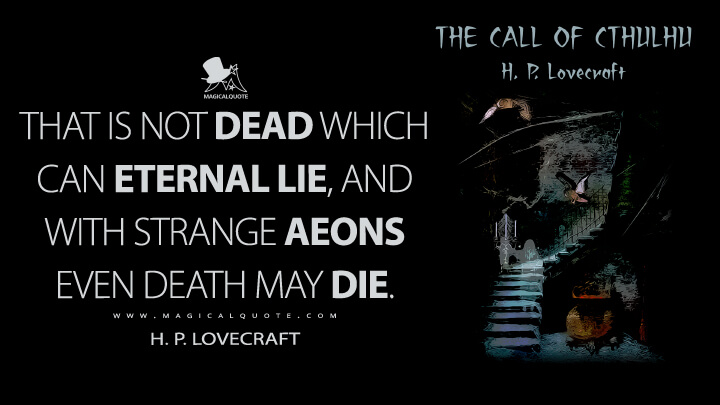 That is not dead which can eternal lie, And with strange aeons even death may die.The Call of Cthulhu (1926)