Game of Thrones: The Best Quotes from Season 7 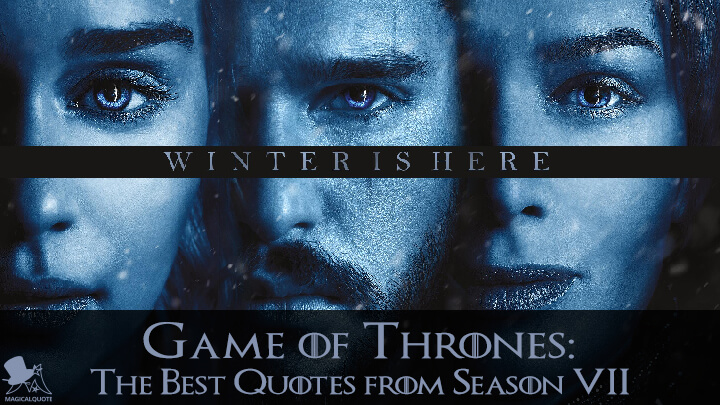 Season 7 brings us new excitements. The final battle is closer than ever. Who, in the end, will sit on the Iron Throne? Daenerys, Cersei, John Snow? Or maybe it will be the Night King?

While we are waiting for the next season, which will also be the last season of the series, here are some of the best quotes from season 7. 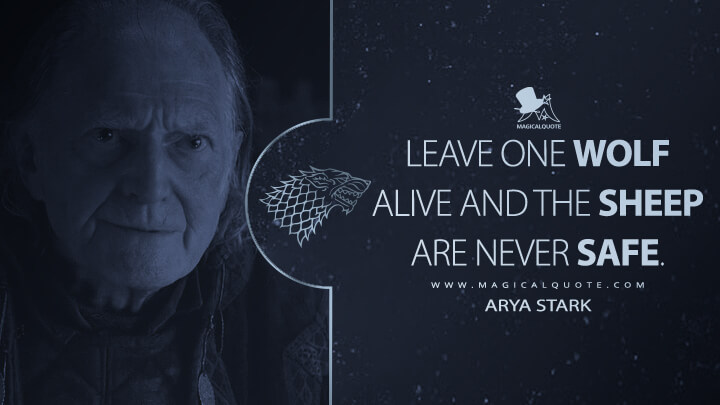 Leave one wolf alive and the sheep are never safe.Arya Stark, S7.Ep1: Dragonstone 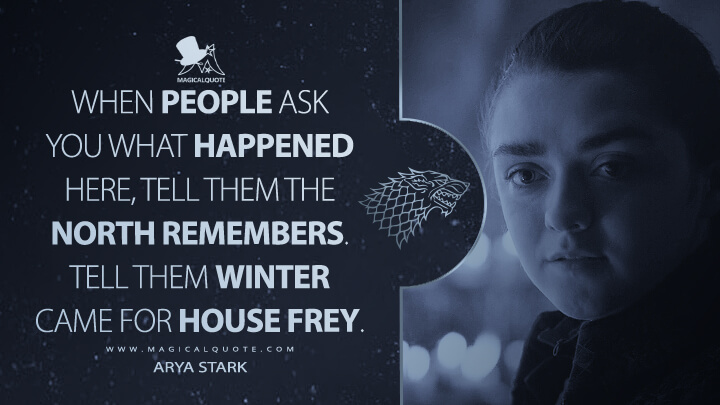 When people ask you what happened here, tell them the North remembers. Tell them winter came for House Frey.Arya Stark, S7.Ep1: Dragonstone 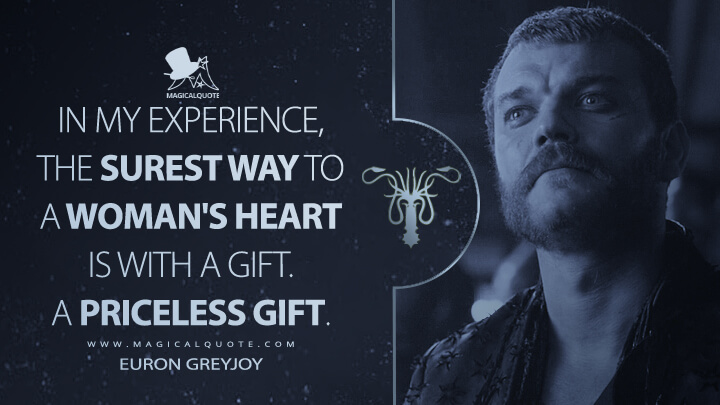 In my experience, the surest way to a woman’s heart is with a gift. A priceless gift.Euron Greyjoy, S7.Ep1: Dragonstone 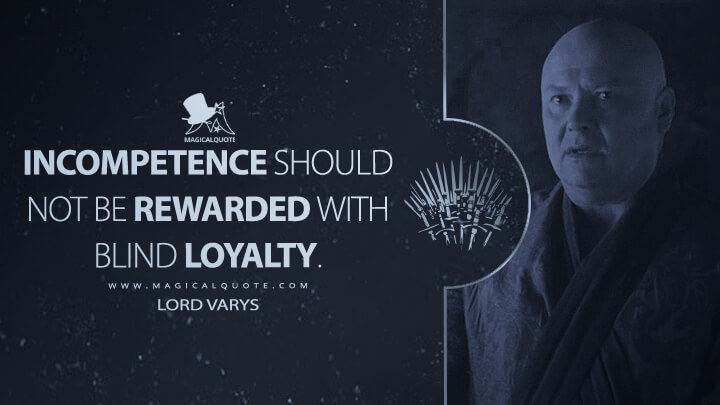 Incompetence should not be rewarded with blind loyalty.Lord Varys, S7.Ep2: Stormborn 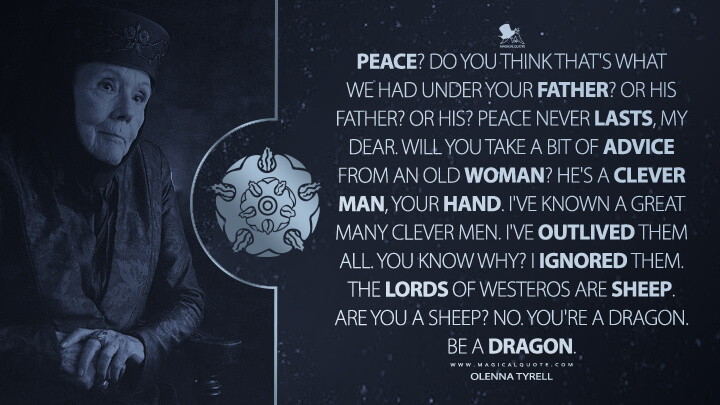 Peace? Do you think that’s what we had under your father? Or his father? Or his? Peace never lasts, my dear. Will you take a bit of advice from an old woman? He’s a clever man, your Hand. I’ve known a great many clever men. I’ve outlived them all. You know why? I ignored them. The lords of Westeros are sheep. Are you a sheep? No. You’re a dragon. Be a dragon.Olenna Tyrell (to Daenerys), S7.Ep2: Stormborn 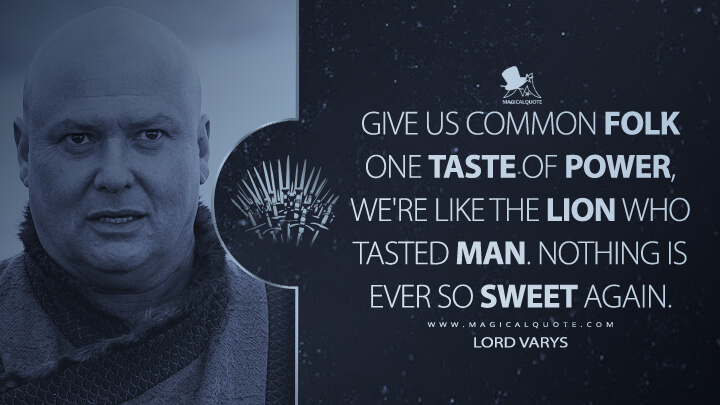 Give us common folk one taste of power, we’re like the lion who tasted man. Nothing is ever so sweet again.Lord Varys, S7.Ep3: The Queen's Justice 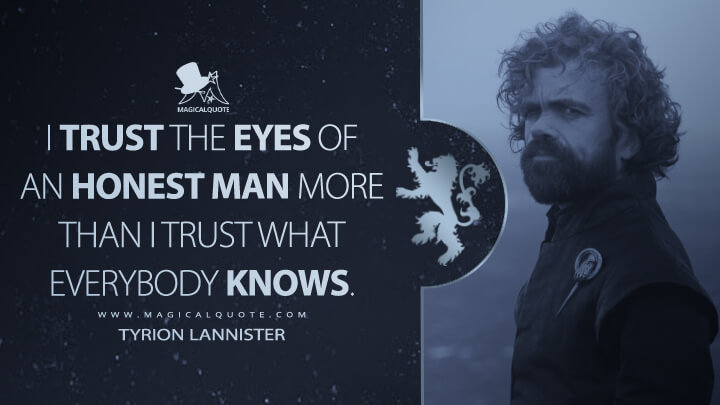 I trust the eyes of an honest man more than I trust what everybody knows.Tyrion Lannister, S7.Ep3: The Queen's Justice 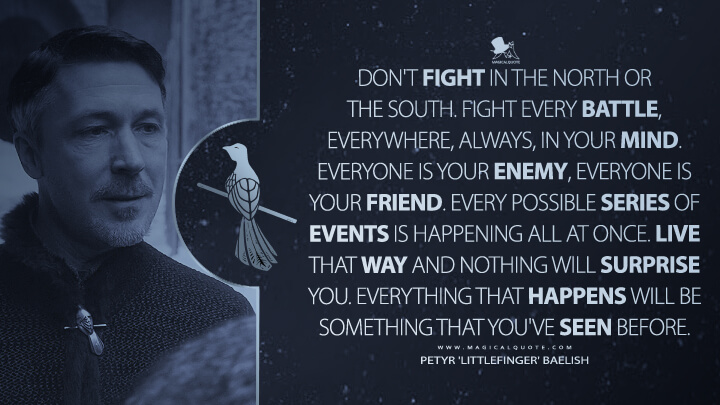 Don’t fight in the North or the South. Fight every battle, everywhere, always, in your mind. Everyone is your enemy, everyone is your friend. Every possible series of events is happening all at once. Live that way and nothing will surprise you. Everything that happens will be something that you’ve seen before.Petyr Baelish, S7.Ep3: The Queen's Justice 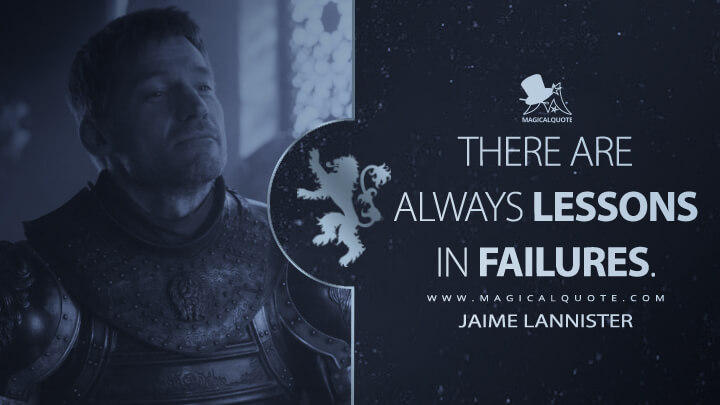 There are always lessons in failures.Jaime Lannister, S7.Ep3: The Queen's Justice 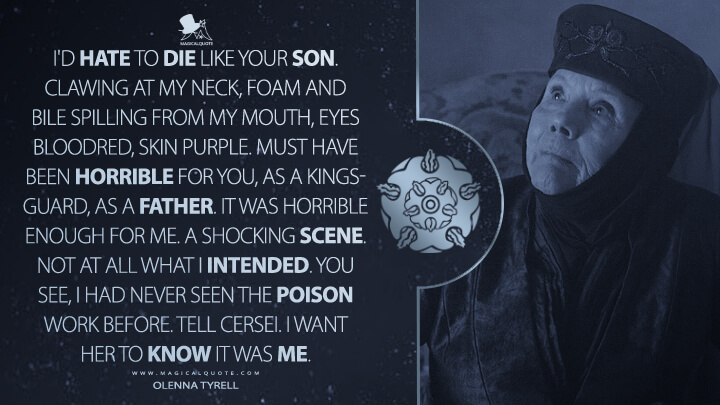 I’d hate to die like your son. Clawing at my neck, foam and bile spilling from my mouth, eyes bloodred, skin purple. Must have been horrible for you, as a Kingsguard, as a father. It was horrible enough for me. A shocking scene. Not at all what I intended. You see, I had never seen the poison work before. Tell Cersei. I want her to know it was me.Olenna Tyrell (to Jaime), S7.Ep3: The Queen's Justice 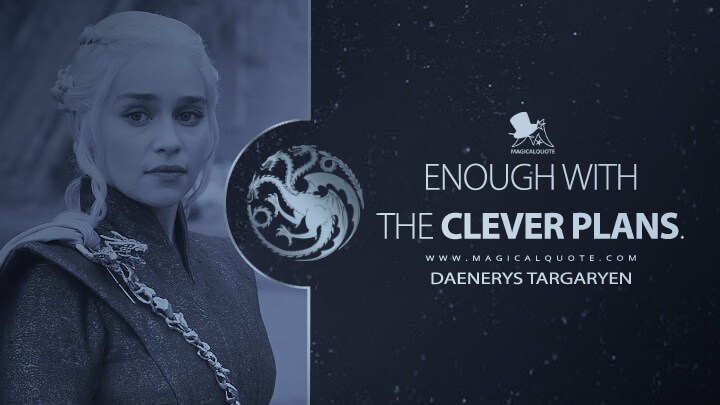 Enough with the clever plans.Daenerys Targaryen, S7.Ep4: The Spoils of War 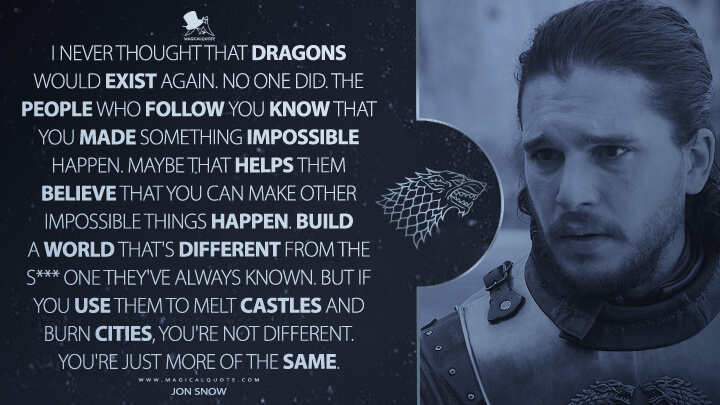 I never thought that dragons would exist again. No one did. The people who follow you know that you made something impossible happen. Maybe that helps them believe that you can make other impossible things happen. Build a world that’s different from the s*** one they’ve always known. But if you use them to melt castles and burn cities, you’re not different. You’re just more of the same.Jon Snow (to Daenerys), S7.Ep4: The Spoils of War 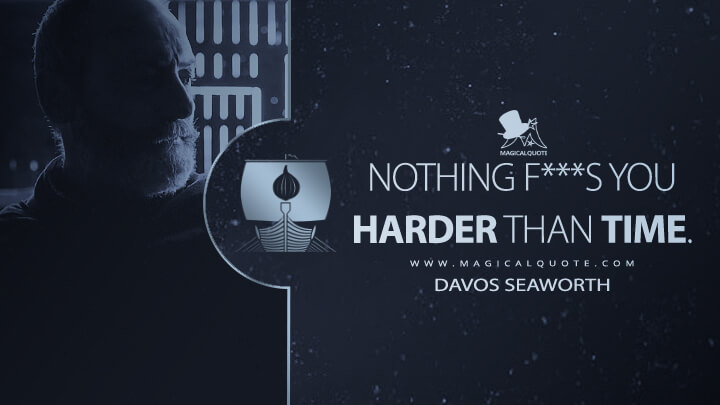 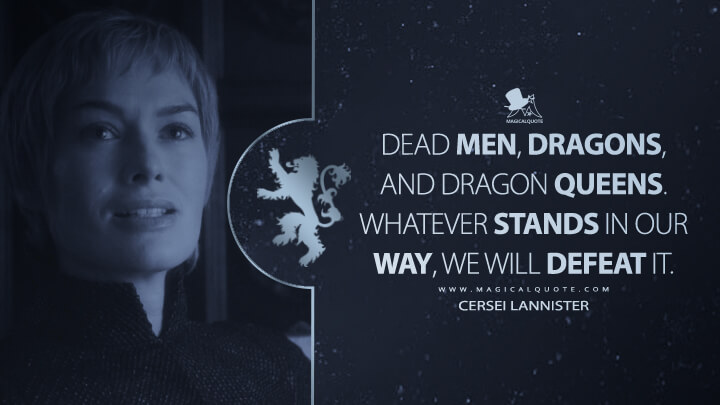 Dead men, dragons, and dragon queens. Whatever stands in our way, we will defeat it.Cersei Lannister (to Jaime), S7.Ep5: Eastwatch 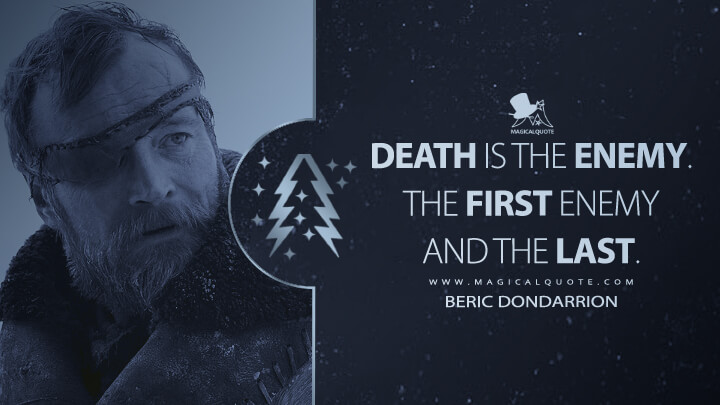 Death is the enemy. The first enemy and the last.Beric Dondarrion, S7.Ep6: Beyond the Wall 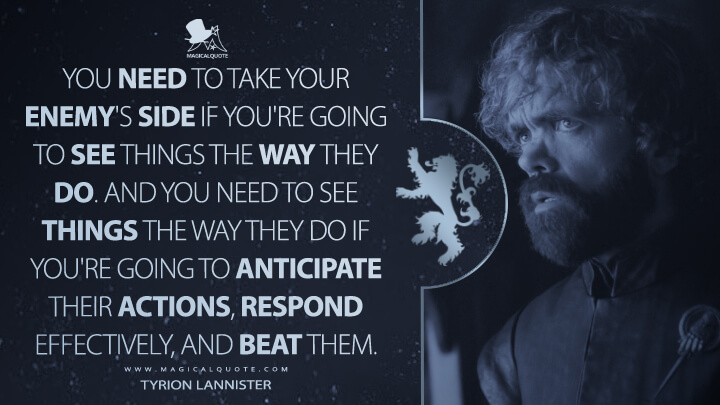 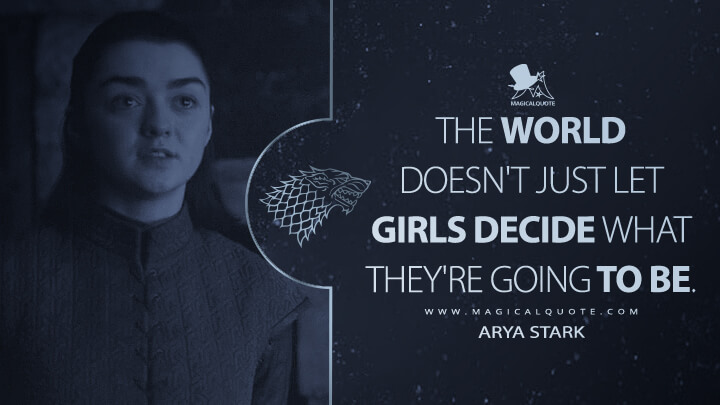 The world doesn’t just let girls decide what they’re going to be.Arya Stark (to Sansa), S7.Ep6: Beyond the Wall 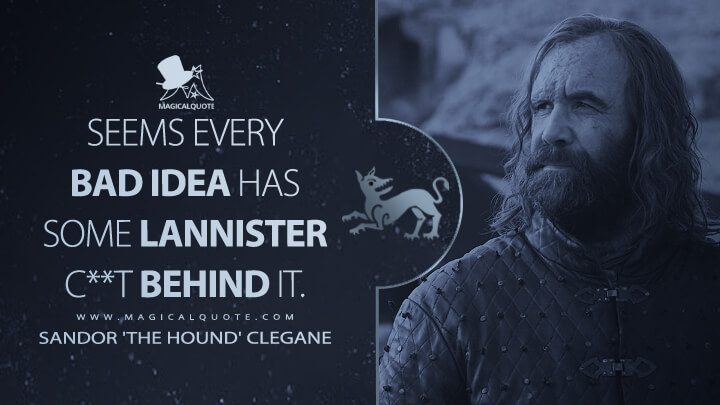 Seems every bad idea has some Lannister c**t behind it.Sandor Clegane, S7.Ep7: The Dragon and the Wolf 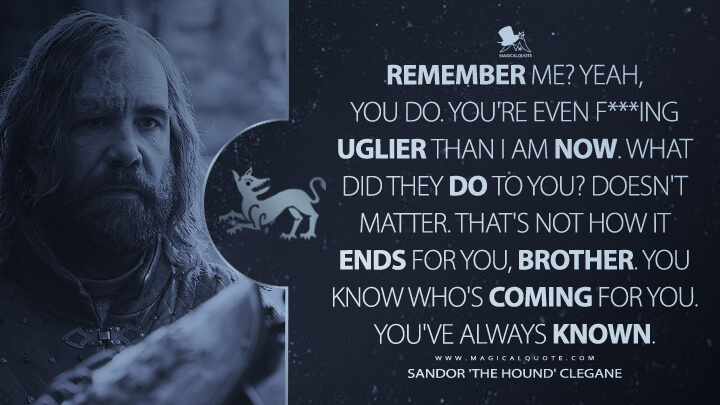 Remember me? Yeah, you do. You’re even f***ing uglier than I am now. What did they do to you? Doesn’t matter. That’s not how it ends for you, brother. You know who’s coming for you. You’ve always known.Sandor Clegane, S7.Ep7: The Dragon and the Wolf 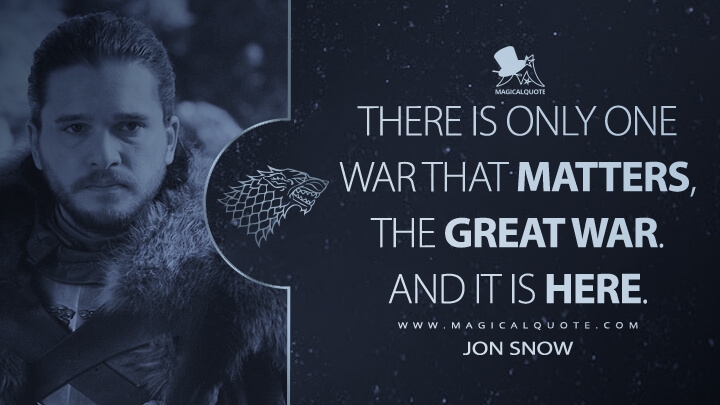 There is only one war that matters, the Great War. And it is here.Jon Snow, S7.Ep7: The Dragon and the Wolf 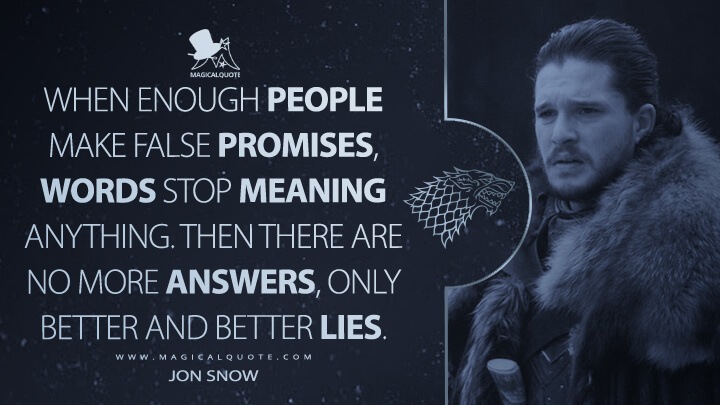 When enough people make false promises, words stop meaning anything. Then there are no more answers, only better and better lies.Jon Snow, S7.Ep7: The Dragon and the Wolf 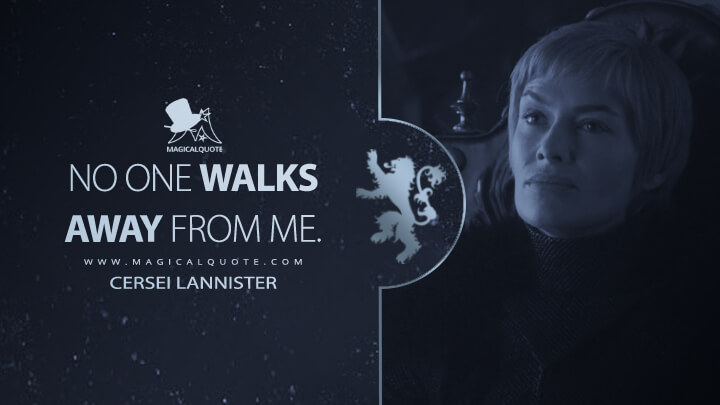 No one walks away from me.Cersei Lannister, S7.Ep7: The Dragon and the Wolf 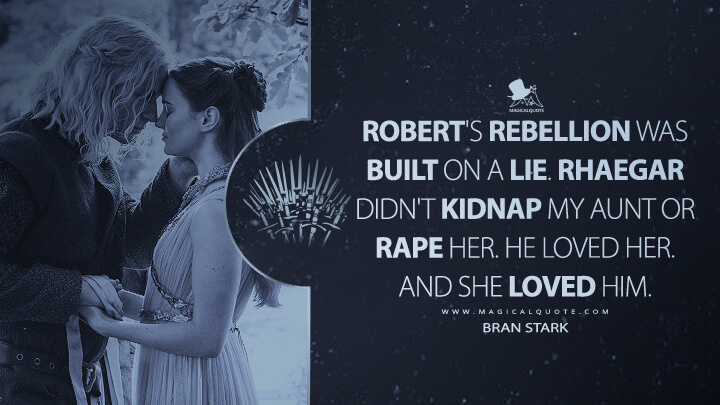 Robert’s Rebellion was built on a lie. Rhaegar didn’t kidnap my aunt or rape her. He loved her. And she loved him.Bran Stark, S7.Ep7: The Dragon and the Wolf 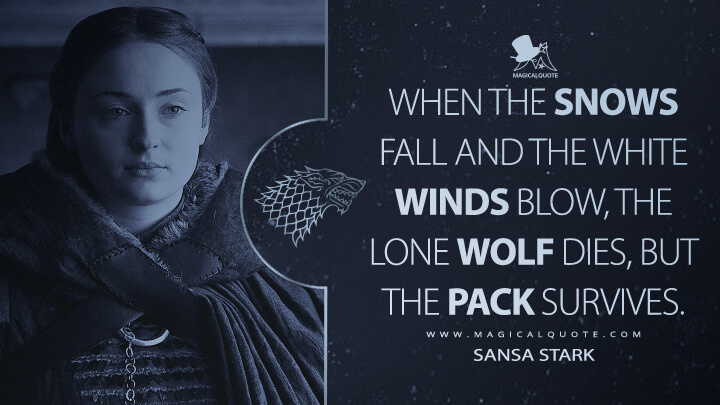 When the snows fall and the white winds blow, the lone wolf dies, but the pack survives.Sansa Stark (quoting Eddard Stark), S7.Ep7: The Dragon and the Wolf

What are your favorite quotes from season 7?