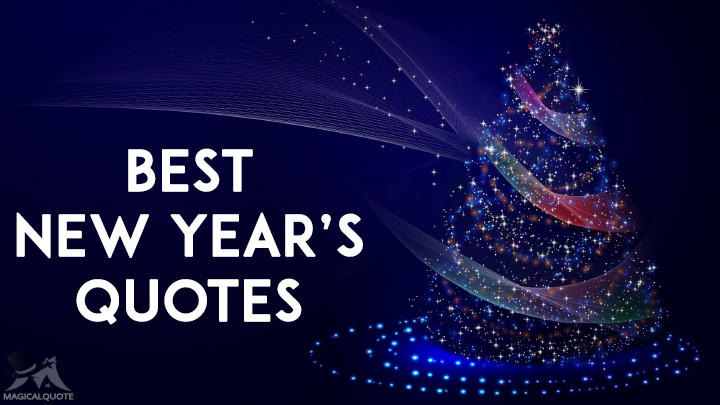 New Year is the perfect time for new beginnings, resolutions, and setting goals.

No matter how successful you were last year, now is the right moment for a fresh start.  The New Year comes with a hope that we will be able to achieve everything that we have not succeeded so far.

Below are some of the most famous New Year’s quotes that will help and motivate you to uphold your goals and wishes in the year ahead of us. And some of them will make you laugh. 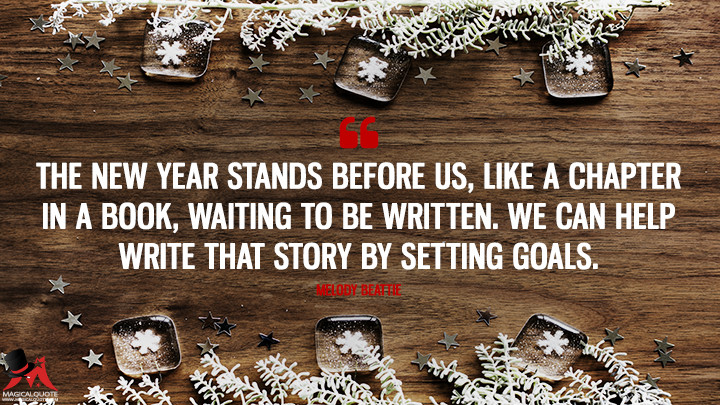 1
The new year stands before us, like a chapter in a book, waiting to be written. We can help write that story by setting goals.Melody Beattie, The Language of Letting Go: A Meditation Book and Journal for Daily Reflections (2003) 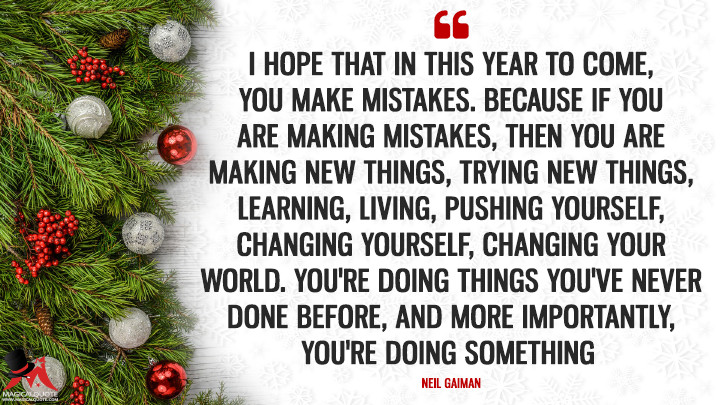 2
I hope that in this year to come, you make mistakes. Because if you are making mistakes, then you are making new things, trying new things, learning, living, pushing yourself, changing yourself, changing your world. You’re doing things you’ve never done before, and more importantly, you’re Doing Something.Neil Gaiman, 'My New Year Wish' (December 31, 2011) 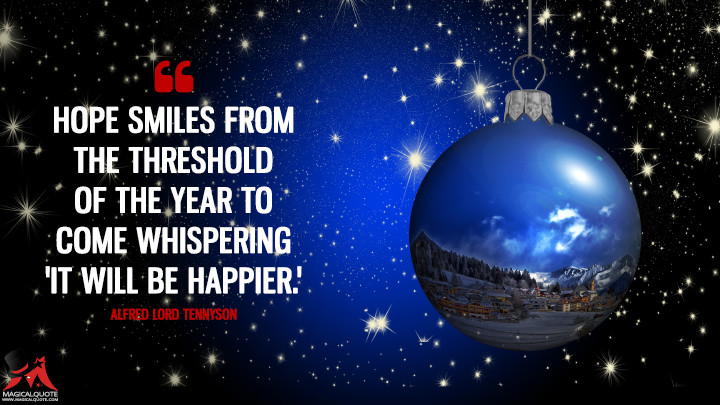 3
Hope smiles from the threshold of the year to come whispering ‘It will be happier.’Alfred Lord Tennyson, The Foresters, Robin Hood and Maid Marion (1892) 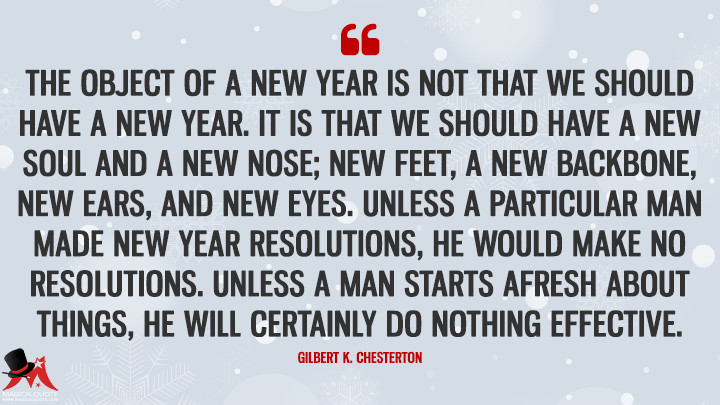 4
The object of a New Year is not that we should have a new year. It is that we should have a new soul and a new nose; new feet, a new backbone, new ears, and new eyes. Unless a particular man made New Year resolutions, he would make no resolutions. Unless a man starts afresh about things, he will certainly do nothing effective.Gilbert K. Chesterton, A Chesterton Calendar (1911) 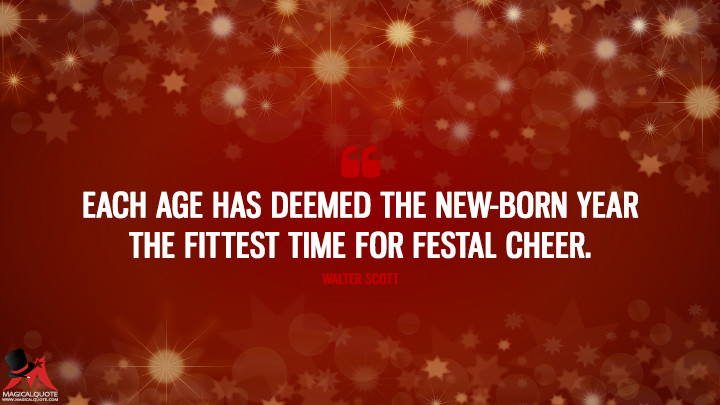 5
Each age has deemed the new-born year the fittest time for festal cheer.Walter Scott, The Belfast Monthly Magazine (1808) 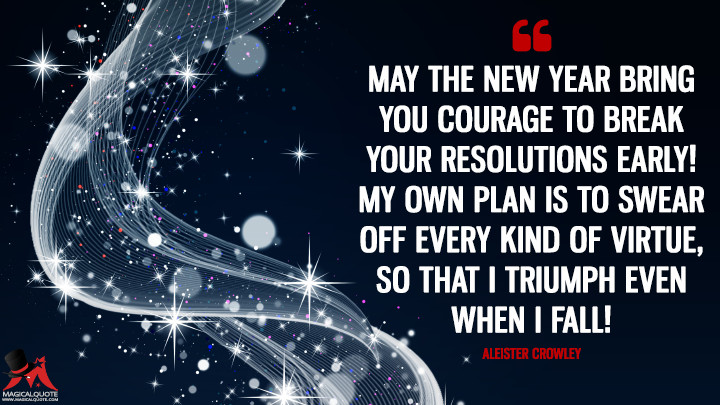 6
May the New Year bring you courage to break your resolutions early! My own plan is to swear off every kind of virtue, so that I triumph even when I fall!Aleister Crowley, Moonchild (1923) 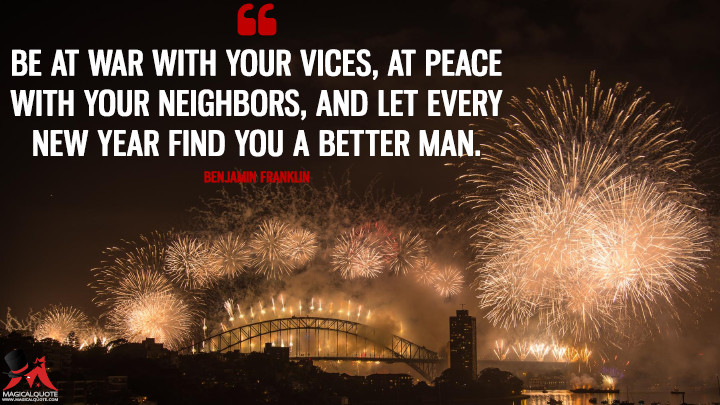 7
Be at war with your vices, at peace with your neighbors, and let every new year find you a better man.Benjamin Franklin, Poor Richard's Almanac (1755) 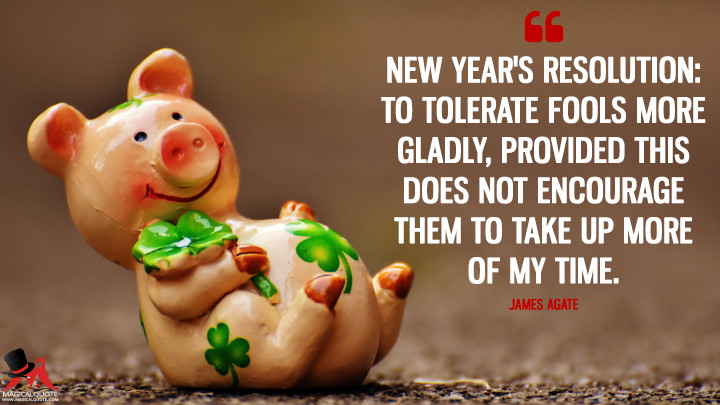 8
New Year’s Resolution: To tolerate fools more gladly, provided this does not encourage them to take up more of my time.James Agate, A Shorter Ego (1946) 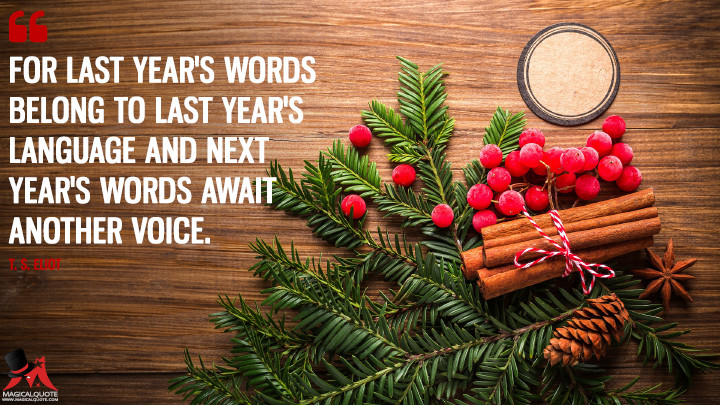 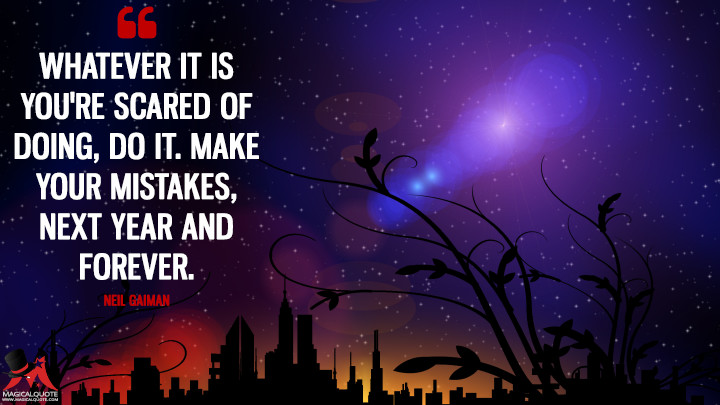 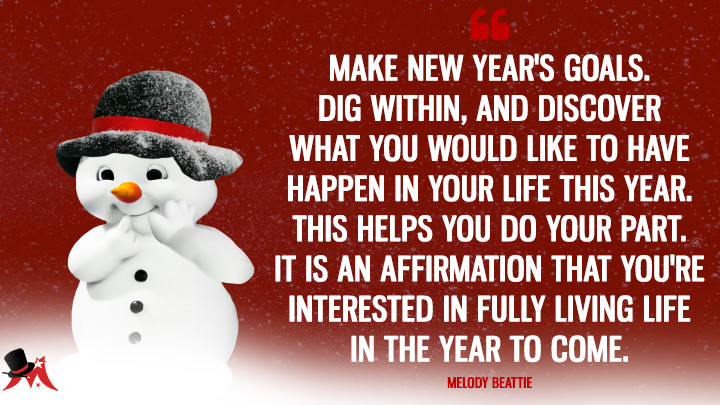 11
Make New Year’s goals. Dig within, and discover what you would like to have happen in your life this year. This helps you do your part. It is an affirmation that you’re interested in fully living life in the year to come.Melody Beattie, The Language of Letting Go: A Meditation Book and Journal for Daily Reflections (2003) 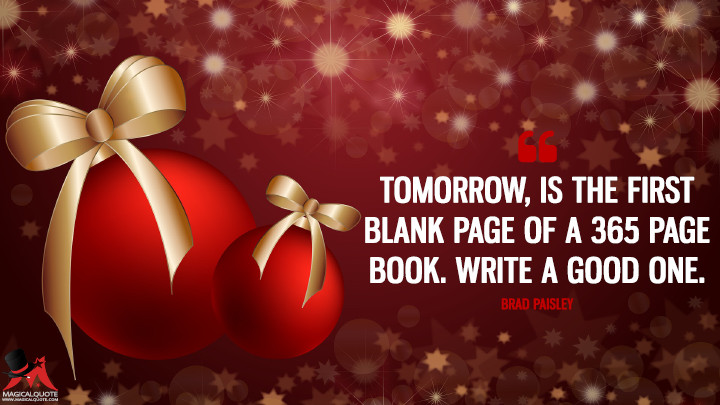 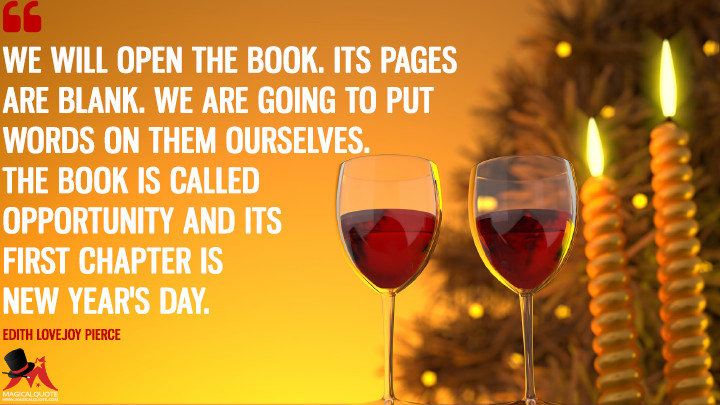 13
We will open the book. Its pages are blank. We are going to put words on them ourselves. The book is called Opportunity and its first chapter is New Year’s Day.Edith Lovejoy Pierce, Meditations for Women (1947) 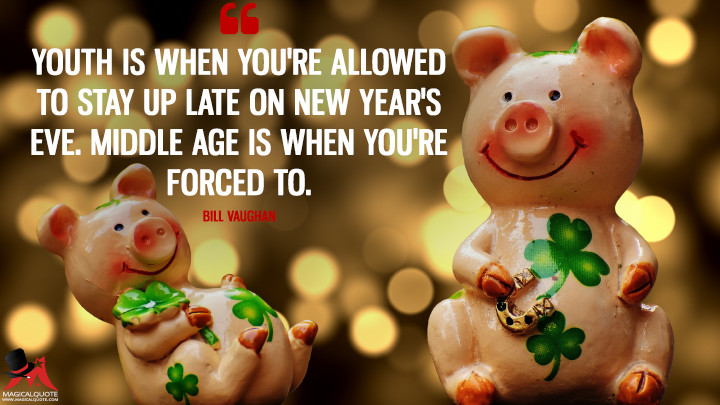 14
Youth is when you’re allowed to stay up late on New Year’s Eve. Middle age is when you’re forced to.Bill Vaughan, the joke originated with ‘Senator Soaper’ who in 1958 was the fictional alter ego of the journalist Bill Vaughan. 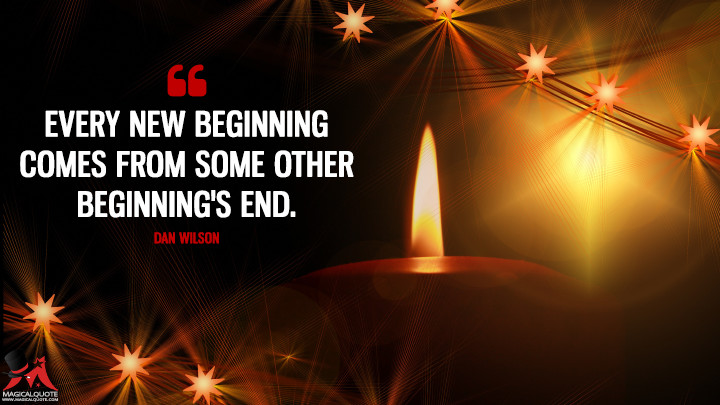 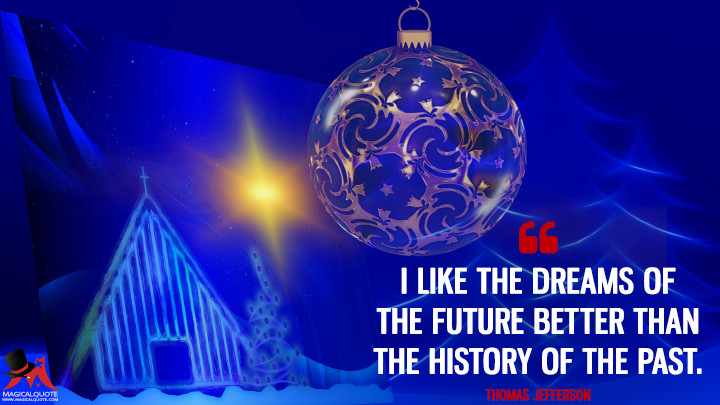 16
I like the dreams of the future better than the history of the past.Thomas Jefferson, Letter to John Adams (August 1, 1816) 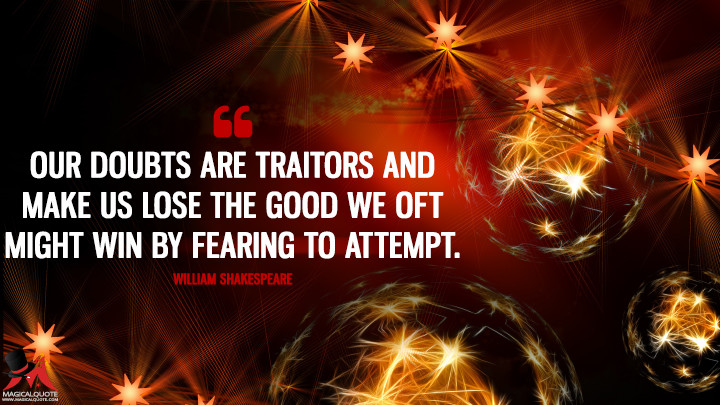 17
Our doubts are traitors
And make us lose the good we oft might win
By fearing to attempt.William Shakespeare, Measure for Measure (1604) 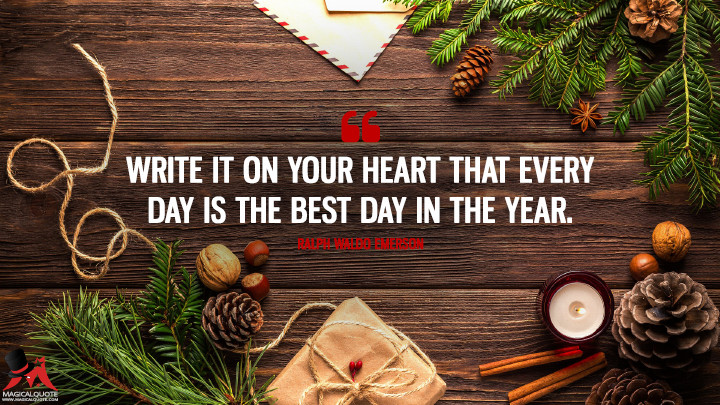 18
Write it on your heart that every day is the best day in the year.Ralph Waldo Emerson, 'Works and Days,' Society and Solitude (1870)