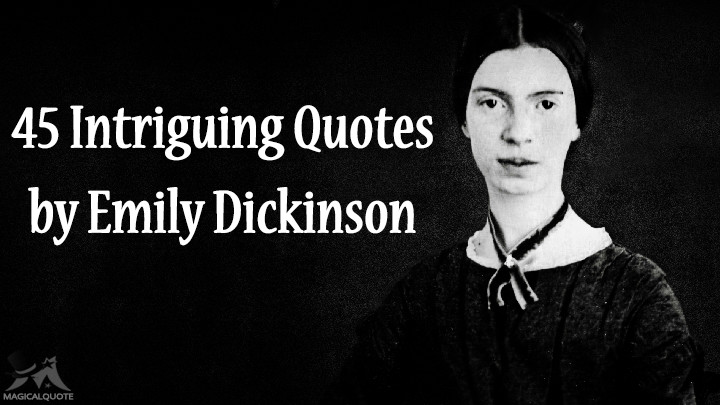 Dickinson spent most of her life in isolation on the family homestead. She is known for her unique style and innovative use of form and syntax for the era in which she wrote. Many of her poems as central themes use death and immortality. Although she was a very prolific poet and regularly sent poems to her friends and correspondents, she was unrecognized in her own time. Only a small number of nearly eighteen hundred poems were published during her lifetime.

The first volume of her poetry was published in 1890 by Mabel Loomis Todd and Thomas Wentworth Higginson. A full compilation and mostly unaltered collection of her poetry, The Poems of Emily Dickinson by Thomas H. Johnson became available in 1955.

My friends are my estate. Forgive me then the avarice to hoard them!Letter to Mr. Samuel Bowles (Late August, 1858?)

Truth is such a rare thing, it is delightful to tell it.Letter to Mr. Thomas Wentworth Higginson (August, 1870)

Saying nothing, sometimes says the Most.Letter to Mrs. Joseph A. Sweetser (late January, 1874) 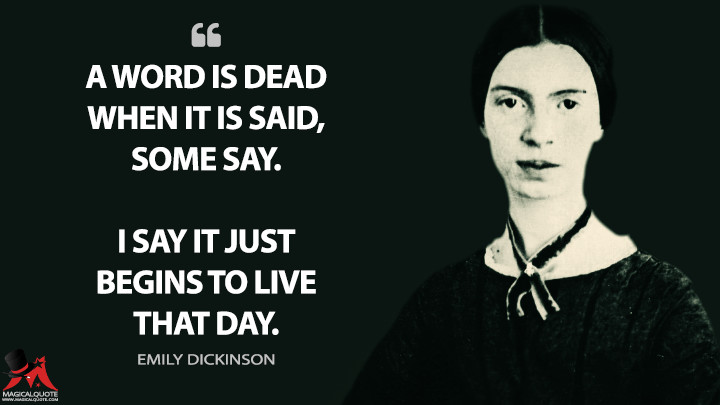 A word is dead
When it is said,
Some say.

[Dogs] They are better than beings because they know, but do not tell.Letter to Mr. Thomas Wentworth Higginson (April 26, 1862)

Best Grief is Tongueless — before He’ll tell —
Burn Him in the Public Square —Poem 793: Grief is a Mouse —

Dying is a wild Night and a new Road.Letter to Perez Cowan (October, 1869)

In such a porcelain life, one likes to be sure that all is well, lest one stumble upon one’s hopes in a pile of broken crockery.Letter to Mr. Samuel Bowles (late August 1858?)

I argue thee
That love is life —
And life hath Immortality —Poem 549: That I shall love alway — 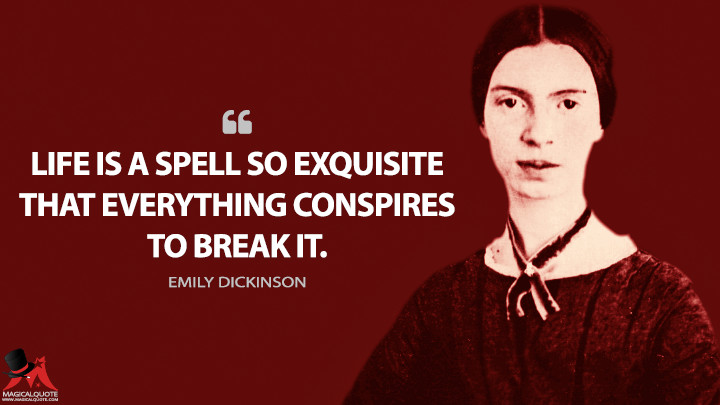 Life is a spell so exquisite that everything conspires to break it.Letter to Louise and Frances Norcross (late April, 1873)

Even the possible has its insoluble particle.Letter to Mr. Thomas Wentworth Higginson (September 26, 1870)

To live is so startling, it leaves but little room for other occupations.Letter to Mr. Thomas Wentworth Higginson (Late, 1872)

Enough is so vast a sweetness, I suppose it never occurs, only pathetic counterfeits.Letter to Mr. Thomas Wentworth Higginson (September 26, 1870)

Ourself behind ourself, concealed —
Should startle most —
Assassin hid in our Apartment
Be Horror’s least.Poem 670: One need not be a Chamber — to be Haunted —

Shame need not crouch
In such an Earth as Ours —
Shame — stand erect —
The Universe is yours.Poem 1304: Not with a Club, the Heart is broken

How strange that Nature does not knock, and yet does not intrude!Letter to Mrs. F.S. Cooper (1877) 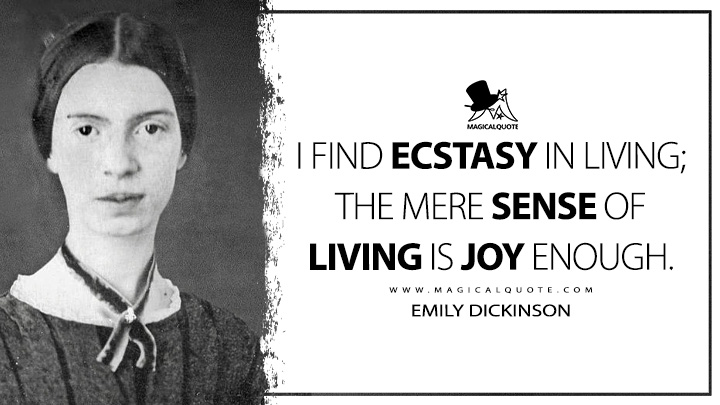 I find ecstasy in living; the mere sense of living is joy enough.Letter to Mr. Thomas Wentworth Higginson (August, 1870)