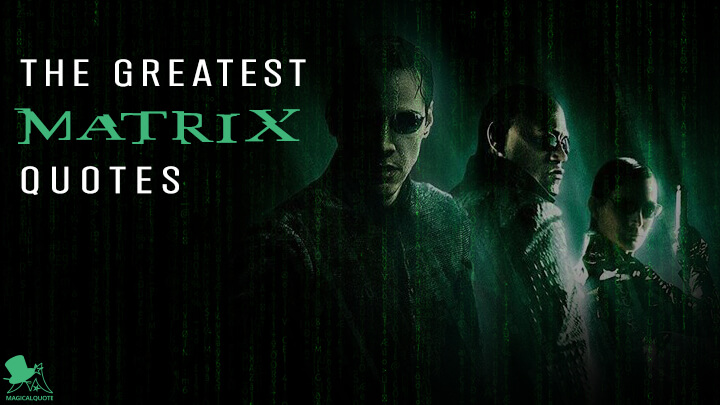 The Matrix is an American science fiction media franchise created by Lana and Lilly Wachowski and producer Joel Silver. In addition to a series of films, the franchise also includes animation, comics, and video games.

The series follows the cyberpunk story of the fall of humanity due to the development of artificial intelligence. Imprisoned and used as an energy source in a virtual reality system called the Matrix, humanity must find a way to break free.

Here is a list of the best quotes from The Matrix movies and characters such as Neo, Morpheus, and the Oracle. 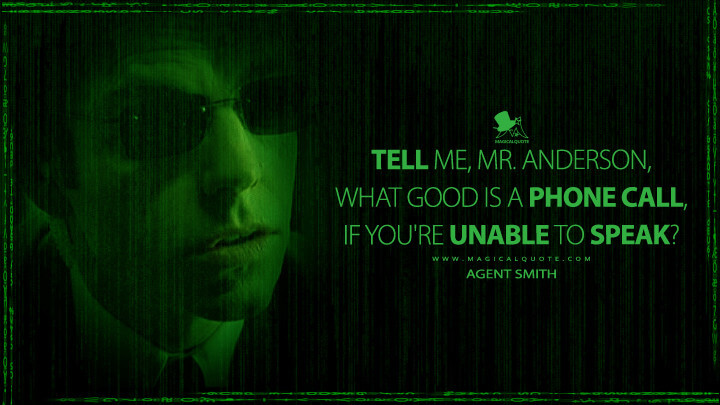 Tell me, Mr. Anderson, what good is a phone call, if you’re unable to speak?Agent Smith 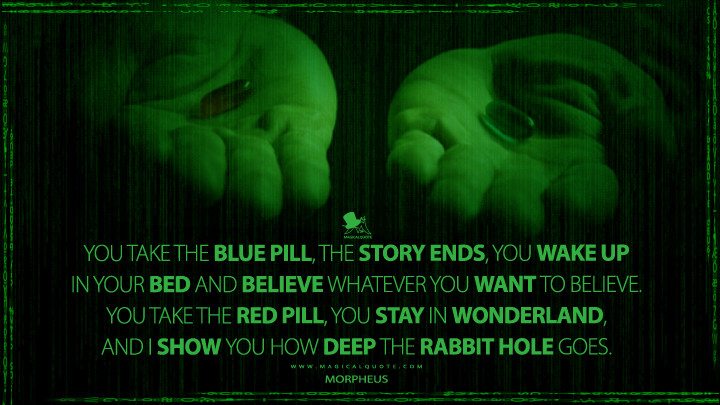 You take the blue pill, the story ends, you wake up in your bed and believe whatever you want to believe. You take the red pill, you stay in Wonderland, and I show you how deep the rabbit hole goes.Morpheus, (to Neo) 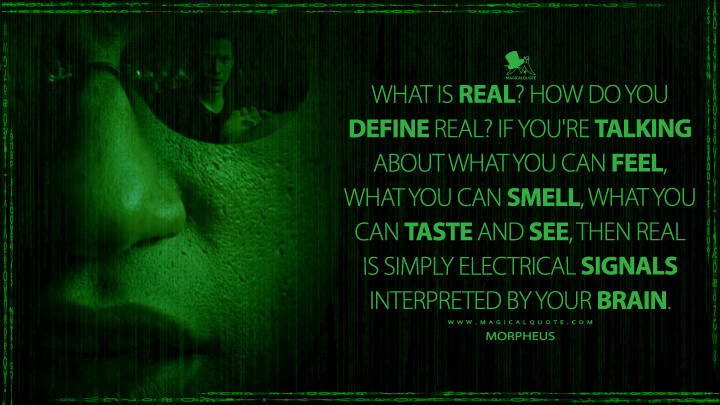 What is real? How do you define real? If you’re talking about what you can feel, what you can smell, what you can taste and see, then real is simply electrical signals interpreted by your brain.Morpheus, (to Neo) 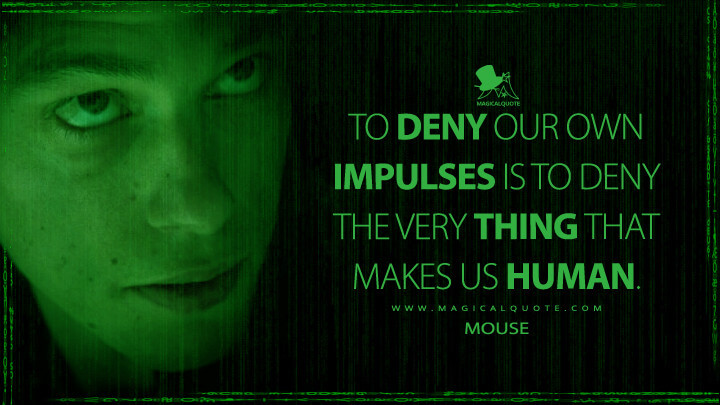 To deny our own impulses is to deny the very thing that makes us human.Mouse 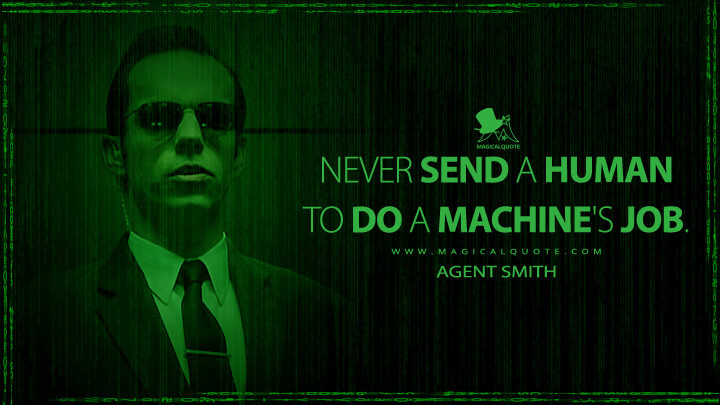 Never send a human to do a machine’s job.Agent Smith 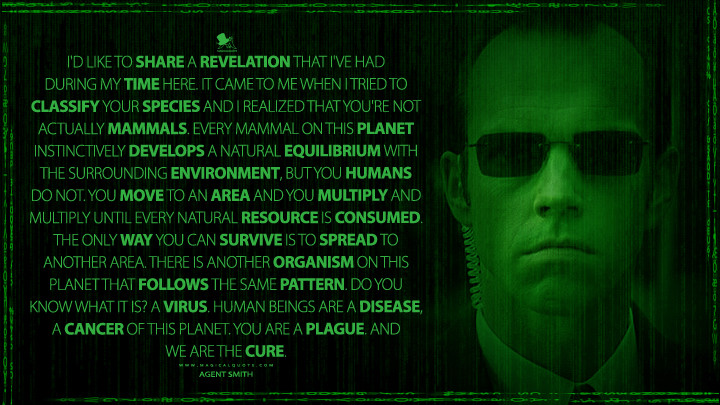 I’d like to share a revelation that I’ve had during my time here. It came to me when I tried to classify your species and I realized that you’re not actually mammals. Every mammal on this planet instinctively develops a natural equilibrium with the surrounding environment, but you humans do not. You move to an area and you multiply and multiply until every natural resource is consumed. The only way you can survive is to spread to another area. There is another organism on this planet that follows the same pattern. Do you know what it is? A virus. Human beings are a disease, a cancer of this planet. You are a plague. And we are the cure.Agent Smith, (to Morpheus) 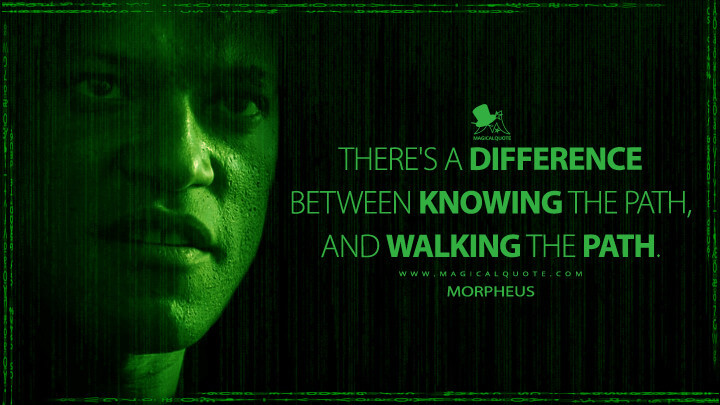 There’s a difference between knowing the path, and walking the path.Morpheus 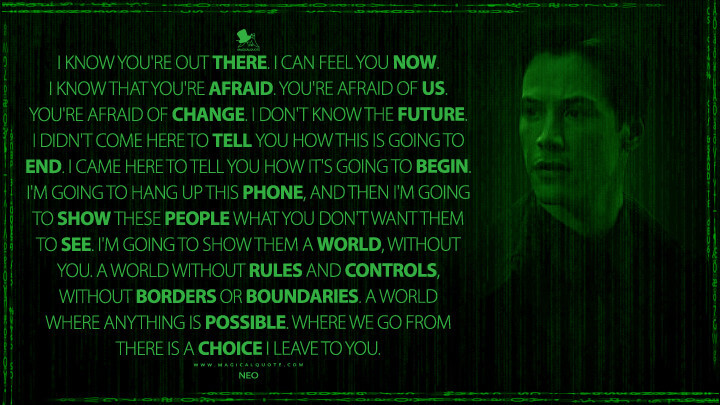 I know you’re out there. I can feel you now. I know that you’re afraid. You’re afraid of us. You’re afraid of change. I don’t know the future. I didn’t come here to tell you how this is going to end. I came here to tell you how it’s going to begin. I’m going to hang up this phone, and then I’m going to show these people what you don’t want them to see. I’m going to show them a world, without you. A world without rules and controls, without borders or boundaries. A world where anything is possible. Where we go from there is a choice I leave to you.Neo 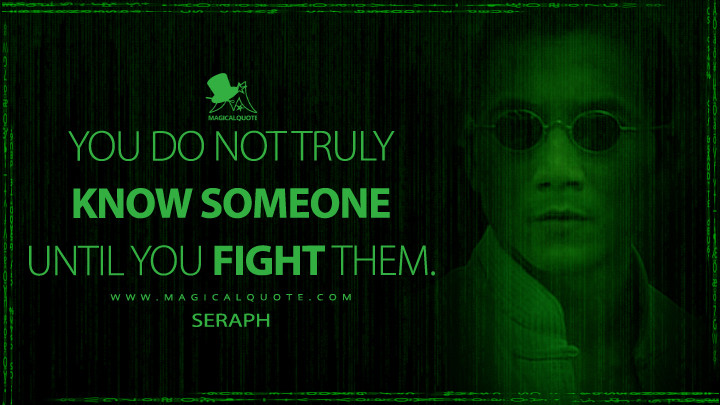 You do not truly know someone until you fight them.Seraph 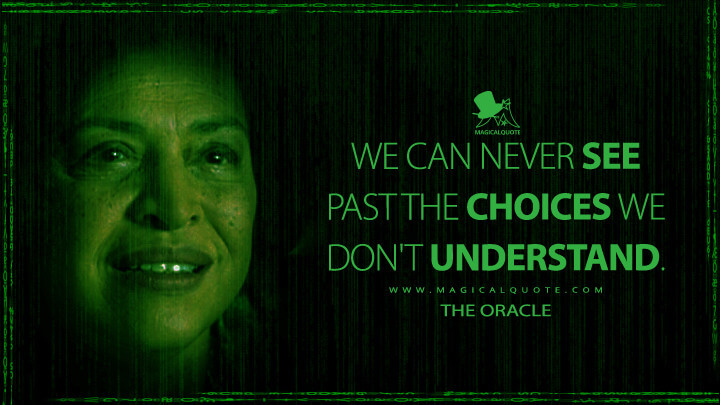 We can never see past the choices we don’t understand.The Oracle 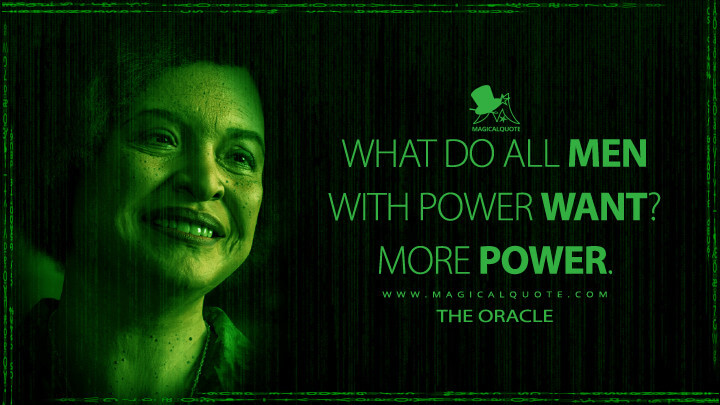 What do all men with power want? More power.The Oracle 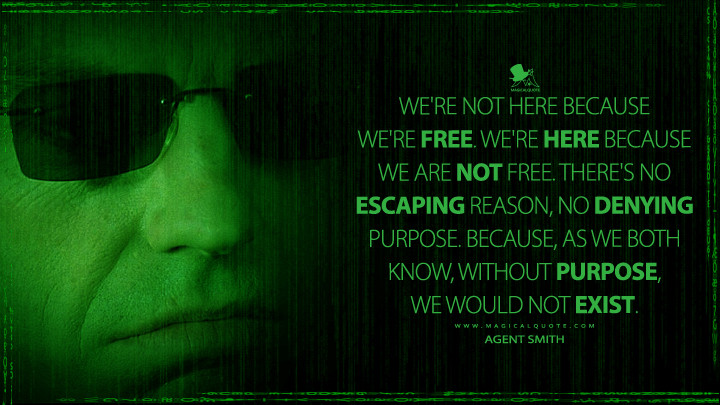 We’re not here because we’re free. We’re here because we are not free. There’s no escaping reason, no denying purpose. Because, as we both know, without purpose, we would not exist.Agent Smith 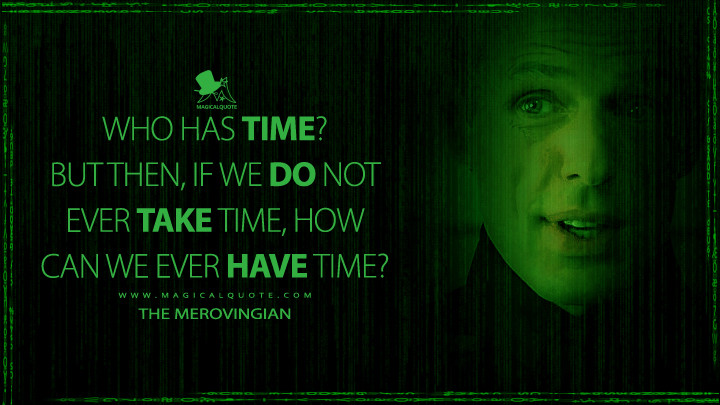 Who has time? But then, if we do not ever take time, how can we ever have time?The Merovingian 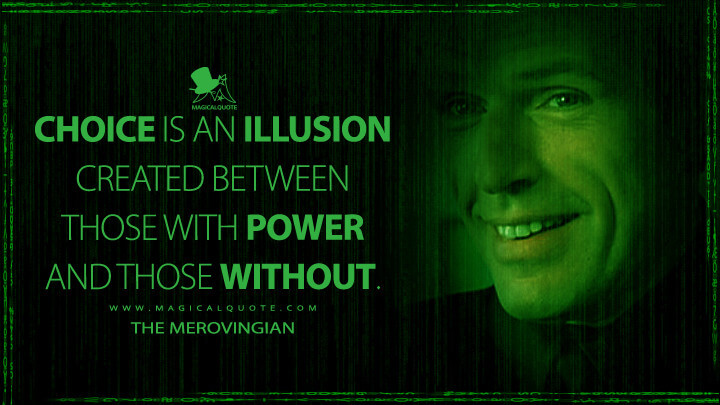 Choice is an illusion created between those with power and those without.The Merovingian 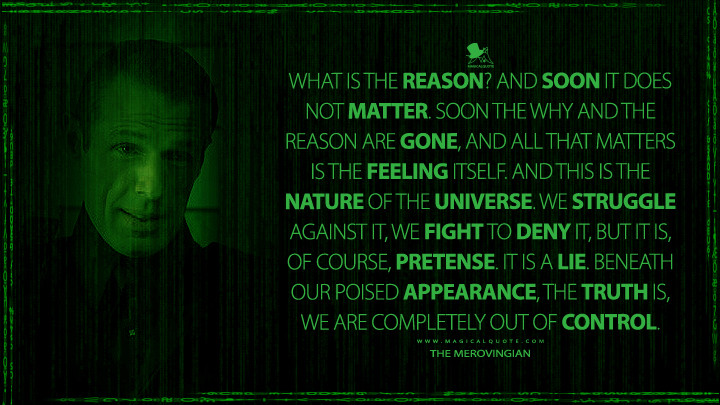 What is the reason? And soon it does not matter. Soon the why and the reason are gone, and all that matters is the feeling itself. And this is the nature of the universe. We struggle against it, we fight to deny it, but it is, of course, pretense. It is a lie. Beneath our poised appearance, the truth is, we are completely out of control.The Merovingian 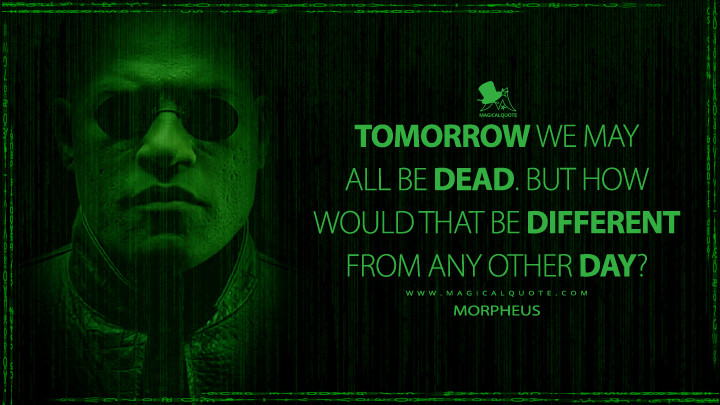 Tomorrow we may all be dead. But how would that be different from any other day?Morpheus 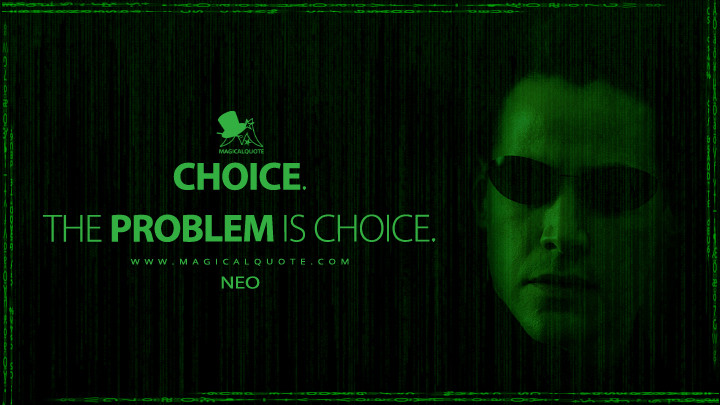 Choice. The problem is choice.Neo 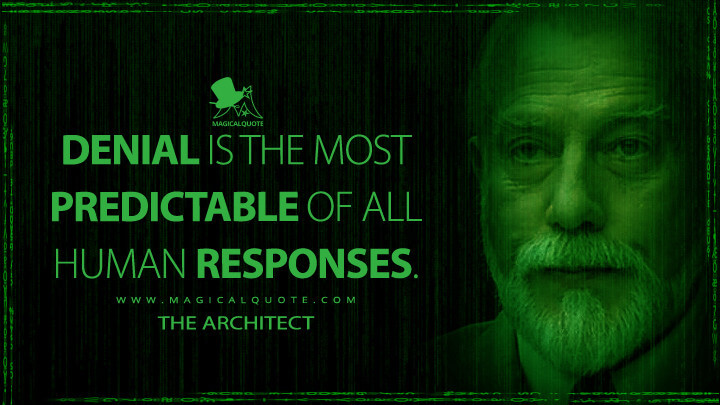 Denial is the most predictable of all human responses.The Architect 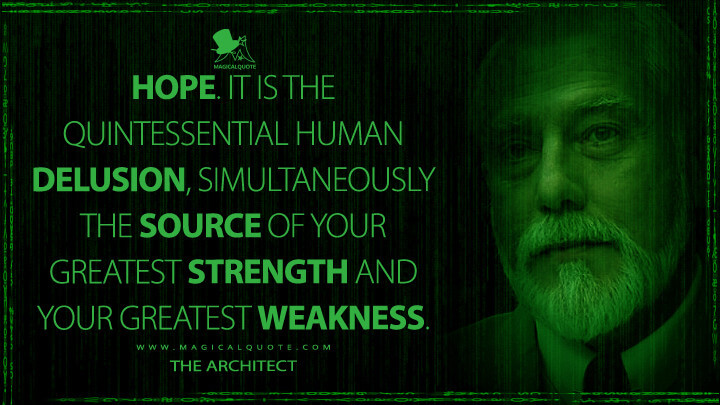 Hope. It is the quintessential human delusion, simultaneously the source of your greatest strength and your greatest weakness.The Architect 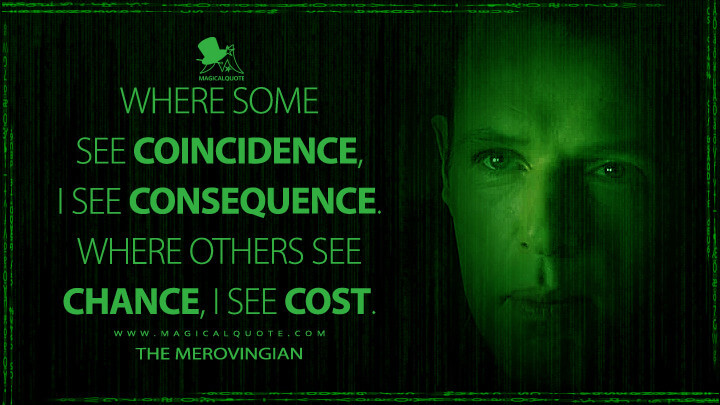 Where some see coincidence, I see consequence. Where others see chance, I see cost.The Merovingian 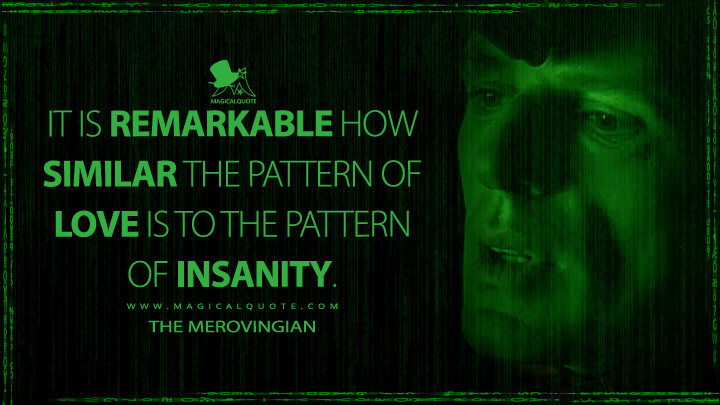 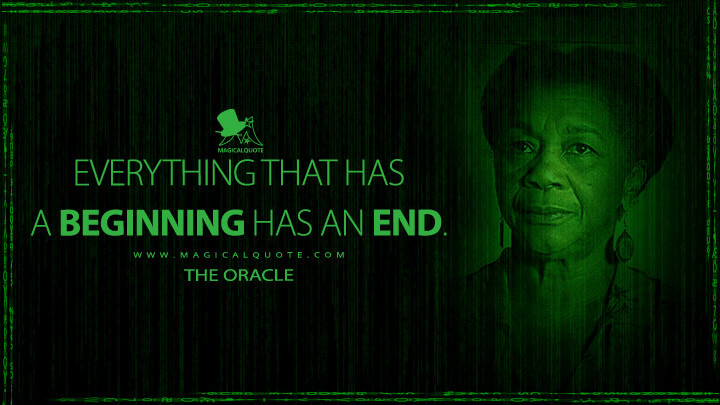 Everything that has a beginning has an end.The Oracle 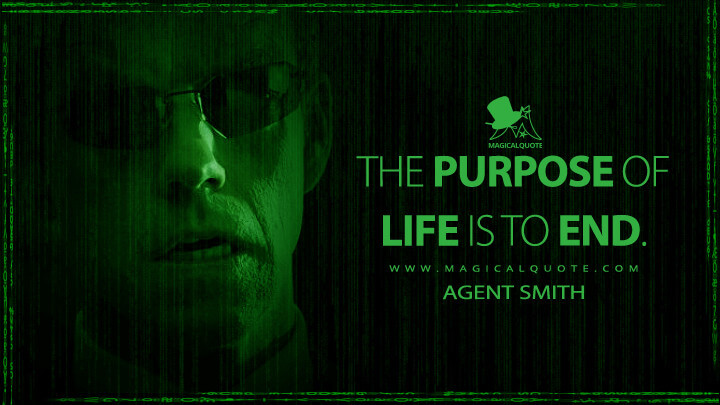 The purpose of life is to end.Agent Smith, (to Neo) 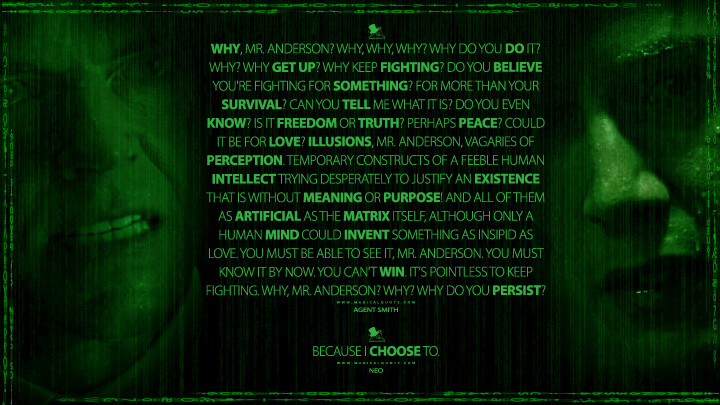 Agent Smith: Why, Mr. Anderson? Why, why, why? Why do you do it? Why? Why get up? Why keep fighting? Do you believe you’re fighting for something? For more than your survival? Can you tell me what it is? Do you even know? Is it freedom or truth? Perhaps peace? Could it be for love? Illusions, Mr. Anderson, vagaries of perception. Temporary constructs of a feeble human intellect trying desperately to justify an existence that is without meaning or purpose! And all of them as artificial as the Matrix itself, although only a human mind could invent something as insipid as love. You must be able to see it, Mr. Anderson. You must know it by now. You can’t win. It’s pointless to keep fighting. Why, Mr. Anderson? Why? Why do you persist?
Neo: Because I choose to.Agent Smith, Neo 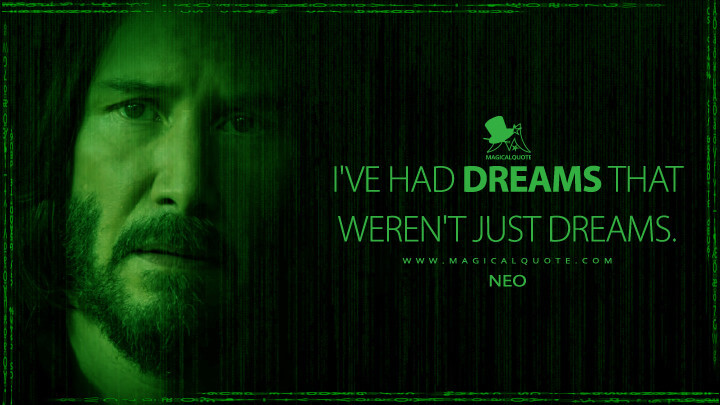 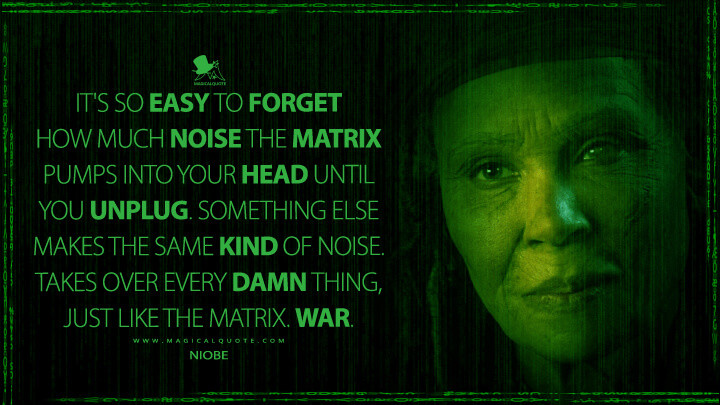 It’s so easy to forget how much noise the Matrix pumps into your head until you unplug. Something else makes the same kind of noise. Takes over every damn thing, just like the Matrix. War.Niobe, (to Neo) 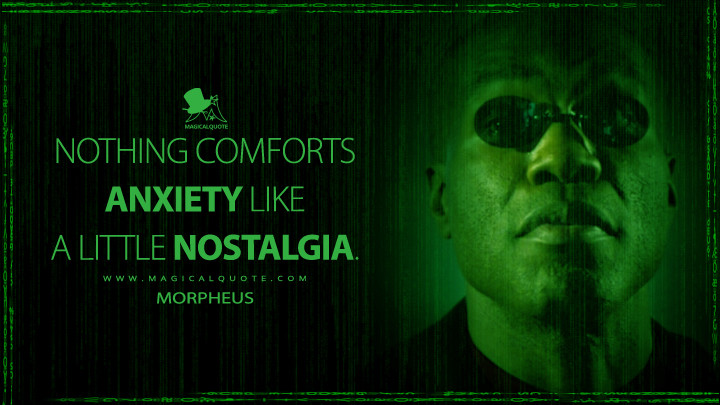 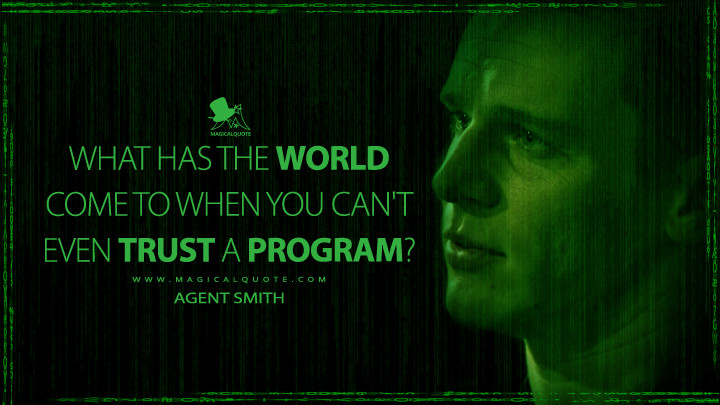 What has the world come to when you can’t even trust a program?Agent Smith