All voting is a sort of gaming, like checkers or backgammon, with a slight moral tinge to it, a playing with right and wrong, with moral questions; and betting naturally accompanies it. The character of the voters is not staked. I cast my vote, perchance, as I think right; but I am not vitally concerned that that right should prevail. I am willing to leave it to the majority.

Truth is always in harmony with herself, and is not concerned chiefly to reveal the justice that may consist with wrong-doing.

Still we live meanly, like ants; though the fable tells us that we were long ago changed into men.

Do not trouble yourself much to get new things, whether clothes or friends. Turn the old; return to them. Things do not change; we change. Sell your clothes and keep your thoughts.

We must learn to reawaken and keep ourselves awake, not by mechanical aids, but by an infinite expectation of the dawn, which does not forsake us in our soundest sleep. 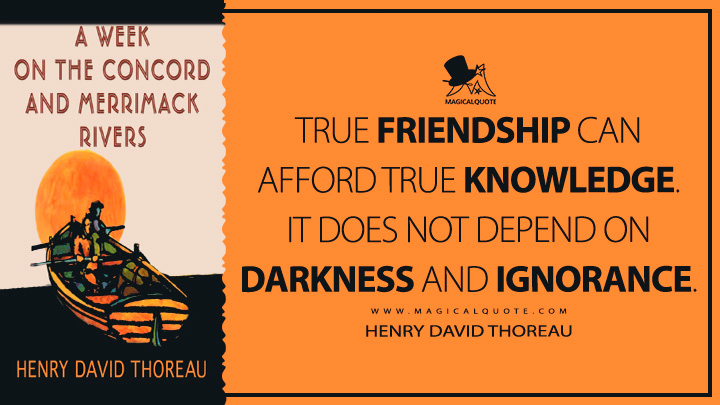 True friendship can afford true knowledge. It does not depend on darkness and ignorance.

There is no rule more invariable than that we are paid for our suspicions by finding what we suspect.

The life which men praise and regard as successful is but one kind. Why should we exaggerate any one kind at the expense of the others?

The animal merely makes a bed, which he warms with his body in a sheltered place; but man, having discovered fire, boxes up some air in a spacious apartment, and warms that, instead of robbing himself, makes that his bed, in which he can move about divested of more cumbrous clothing, maintain a kind of summer in the midst of winter, and by means of windows even admit the light and with a lamp lengthen out the day.

I went to the woods because I wished to live deliberately, to front only the essential facts of life, and see if I could not learn what it had to teach, and not, when I came to die, discover that I had not lived.

An unclean person is universally a slothful one.