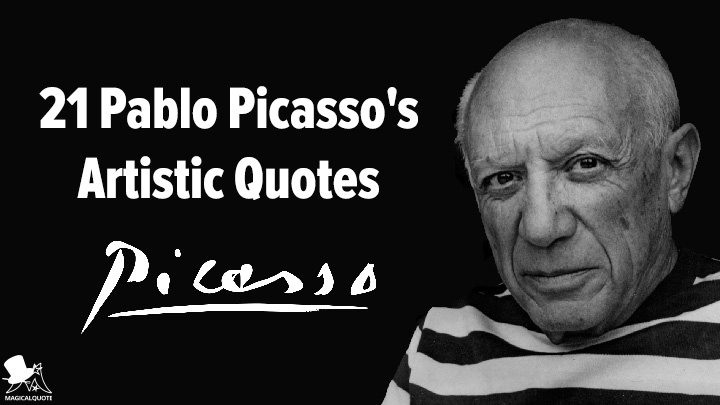 Pablo Picasso (born October 25, 1881, Málaga, Spain – died April 8, 1973, Mougins, France) was a Spanish painter, sculptor, printmaker, ceramicist, and stage designer, one of the most influential artists of the 20th century and the co-creator (alongside Georges Braque) of Cubism.

Born in Malaga, as the first child of Don José Ruiz y Blasco and María Picasso y López, Pablo showed passion for drawing from an early stage. At the age of seven, he received his first formal artistic training from his father who was also a painter and professor of art. After growing up in Spain, Picasso spent most of his adult life as an artist in France.

Throughout his career, Picasso created more than 20,000 pieces of art, including paintings, drawings, sculptures, ceramics, theater sets, and costumes. Some of his most important works are Les Demoiselles d’Avignon (1907), Girl before a Mirror (1932), and Guernica (1937).

Outstandingly prolific during his long life, Picasso achieved universal fame and become one of the most famous and important figures in the modern art.

I begin with an idea and then it becomes something else.'Picasso Library of great painters' by Wilhelm Boeck, Jaime Sabartés (1955)

Painting is a blind man’s profession. He paints not what he sees, but what he feels, what he tells himself about what he has seen.'The Journals of Jean Cocteau' by Jean Cocteau (New York, 1956)

Success is dangerous. One begins to copy oneself, and to copy oneself is more dangerous than to copy others. It leads to sterility.'Picasso,' Vogue, Alexander Liberman (New York, November 1, 1956) pp. 132-134.

Only when painting isn’t painting can there be an affront to modesty.'Picasso: Artist and His Model, and Other Recent Work' by Hélène Parmelin (New York, Abrams, 1965)

Art is not the application of a canon of beauty but what the instinct and the brain can conceive beyond any canon. When we love a woman we don’t start measuring her limbs.'Conversation avec Picasso,' Cahiers d'Art, Christian Zervos (Paris, 1935); Picasso on art: a selection of views (1972)

There is no abstract art. You must always start with something. Afterward you can remove all traces of reality.'Conversation avec Picasso,' Cahiers d'Art, Christian Zervos (Paris, 1935); Picasso on art: a selection of views (1972)

[Speaking of computers] But they are useless. They can only give you answers.The Paris Review 32 of Summer-Fall 1964. The article called 'Pablo Picasso: A Composite Interview' by William Fifield

If there were only one truth, you couldn’t paint a hundred canvases on the same theme.'Picasso says...' by Hélène Parmelin, (London, Allen and Unwin, 1969) page 115

Museums are just a lot of lies, and the people who make art their business are mostly imposters.'Conversation avec Picasso,' Cahiers d'Art, Christian Zervos (Paris, 1935); Picasso on art: a selection of views (1972)

If only we could pull out our brain and use only our eyes.Saturday Review, Volume 39 by Bernard Augustine De Voto (1956)

Work is a necessity for man. A horse does not go between the shafts of its own accord. Man invented the alarm clock.'Conversation avec Picasso,' Cahiers d'Art, Christian Zervos (Paris, 1935); Picasso on art: a selection of views (1972)

Art is never chaste. We forbid it to the ignorant innocents, never allow a contact with it to those not sufficiently prepared. Yes, art is dangerous. And, if it’s chaste it isn’t art.'Pablo Picasso' by Antonina Vallentin (Paris, Club des Éditeurs, Albin-Michel, 1957) page 268

What might be taken for a precocious genius is the genius of childhood. When the child grows up, it disappears without a trace. It may happen that this boy will become a real painter some day, or even a great painter. But then he will have to begin everything again, from zero.'Picasso and Company' by Gyula Halász Brassaï (New York, Doubleday 1966) page 86

What is a face, really? Its own photo? Its make-up? Or is it a face as painted by such or such painter? That which is in front? Inside? Behind? And the rest? Doesn’t everyone look at himself in his own particular way? Deformations simply do not exist.'Midis avec Picasso,' Arts de France, no. 6, Anatole Jakovsky (Paris, 1946); Picasso on art: a selection of views (1972)

Colors, like features, follow the changes of the emotions.'Conversation avec Picasso,' Cahiers d'Art, Christian Zervos (Paris, 1935); Picasso on art: a selection of views (1972)