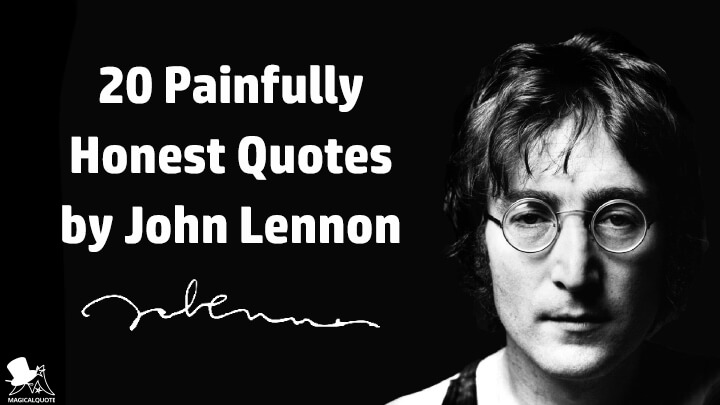 Born and raised in Liverpool, Lennon started his music career by creating the skiffle band named the Quarrymen in 1956. After Lennon met Paul McCartney and invited him to join the group, the group soon evolved into the Beatles in 1960, and the two formed one of the most successful songwriting partnerships and groups in musical history.

John Lennon’s work includes 12 studio albums, 2 live albums, over 10 compilation albums, 21 singles, and 4 box sets. Some of the most popular albums are John Lennon/Plastic Ono Band (1970), Imagine (1971) and Double Fantasy (1980), alongside with songs such as “Give Peace a Chance”, “Imagine”, and “Working Class Hero”.

Life is what happens to you while you’re busy making other plans.'Beautiful Boy,' from the album Darling Boy (1980)

All we are saying is give peace a chance.'Give Peace a Chance,' from the album Plastic Ono Band (1969)

Imagine all the people living life in peace. You may say I’m a dreamer, but I’m not the only one. I hope someday you’ll join us, and the world will be as one.'Imagine,' from the album Imagine (1971)

You don’t need anybody to tell you who you are or what you are. You are what you are!Statement to the press in July 1969 after the release of the Plastic Ono Band's single 'Give Peace a Chance'

We’ve got the gift of love. But love is like a precious plant. You can’t just accept it and leave it in the cupboard, or just think it’s gonna get on with itself. You gotta keep watering it. You’ve got to really look after it, and be careful of it, and keep the flies off and see that it’s alright, and nurture it.'Man of the Decade' Interview (December 2, 1969)

You have to be a bastard to make it, and that’s a fact. And the Beatles are the biggest bastards on earth.Interview by Jann S. Wenner, Rolling Stone magazine (January 21, 1971)

God is a concept by which we measure our pain.'God,' from the album John Lennon/Plastic Ono Band (1970)

If everyone demanded peace instead of another TV set, we’d have peace.During the Bed-In for Peace in Montreal, Canada (June 1, 1969)

Christianity will go. It will vanish and shrink. I needn’t argue about that; I’m right and I will be proved right. We’re more popular than Jesus now; I don’t know which will go first – rock ‘n’ roll or Christianity. Jesus was all right but his disciples were thick and ordinary. It’s them twisting it that ruins it for me.Interview with writer Maureen Cleave, Evening Standard newspaper (March 4, 1966)

Part of me suspects that I’m a loser and the other part of me thinks I’m God Almighty.Interview with David Sheff, Playboy (September 1980)

Art is only a way of expressing pain.Interview with Tariq Ali and Robin Blackburn, Red Mole (January 21, 1971)

Everybody loves you when you’re six foot in the ground.'Nobody Loves You (When You're Down and Out),' from the album Walls and Bridges (1974)

Get out there and get peace. Think peace, live peace, and breathe peace and you’ll get it as soon as you like.Statement to the press in July 1969 after the release of the Plastic Ono Band's single 'Give Peace a Chance'

There’s no problem, only solutions.'Watching the Wheels,' from the album Double Fantasy (1981)

I’m prepared for death because I don’t believe in it. I think it’s just getting out of one car and getting into another.John Lennon and Yoko Ono Interview: Apple Offices, London (May 8, 1969)

I don’t believe in yesterday. I am only interested in what I am doing now.Interview with David Sheff, Playboy (September 1980)

The thing the sixties did was to show us the possibilities and the responsibility that we all had. It wasn’t the answer. It just gave us a glimpse of the possibility.Interview with RKO Radio on the day of his murder (December 8, 1980)

My role in society – or any artist or poet’s role – is to try to express what we all feel. Not to tell people how to feel, not as a preacher, not as a leader, but as a reflection of us all.His last interview, to KFRC RKO Radio, occurred on the day of his death (December 8, 1980)

A genius is a form of madness, and we’re all that way.Interview by Jann S. Wenner, Rolling Stone magazine (January 21, 1971)