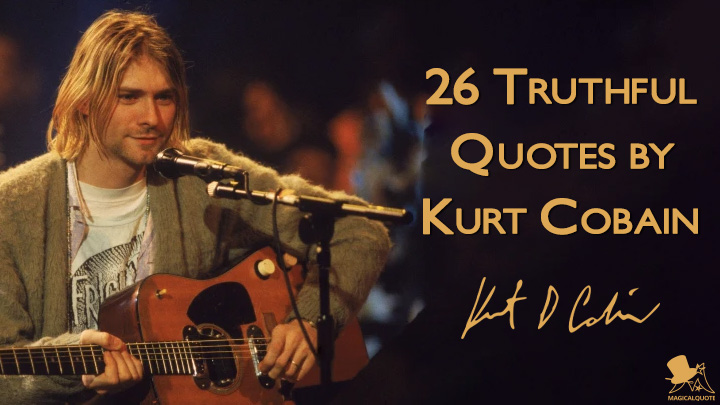 Kurt Donald Cobain was an American singer, guitarist and songwriter who was known as the leader of Nirvana, the grunge (subgenre of alternative rock) band that redefined the sound of the nineties.

Cobain was born on February 20, 1967, in Aberdeen, Washington. His mother, Wendy Elizabeth was a cocktail waitress and his father, Donald Leland Cobain was an auto mechanic. The divorce of his parents had much impact on his future life, after which, Cobain became defiant and withdrawn.

Cobain initially played music alone until he met Novoselic. In 1988, they formed band Nirvana. After the first album titled Bleach they released their second album Nevermind, which launch a music revolution. With Nevermind’s single, “Smells Like Teen Spirit,” Nirvana entered the mainstream. After the third and last album Utero, Cobain was found dead at his home in Seattle on April 8, 1994.

Together with Novoselic and Grohl, Cobain was posthumously inducted into the Rock and Roll Hall of Fame in 2014.

Kurt Cobain has been remembered as one of the greatest musicians in the history of alternative music. Even after 20 years since the death of Kurt Cobain, Nirvana remains popular to this day and has sold more than 75 million albums worldwide.

The duty of youth is to challenge corruption.Unknown source

If you die you’re completely happy and your soul somewhere lives on. I’m not afraid of dying. Total peace after death, becoming someone else is the best hope I’ve got.The Death of the Poet by N Quentin Woolf

We’re just musically and rhythmically retarded. We play so hard that we can’t tune our guitars fast enough. People can relate to that.Kurt Cobain: The Cobain Dossier by Andrew Dent

I’m a much happier guy than a lot of people think I am.As quoted in Rolling Stone (January 27, 1993)

I just hope I don’t become so blissful I become boring. I think I’ll always be neurotic enough to do something weird.As quoted in Rolling Stone (January 27, 1994)

All drugs are a waste of time. They destroy your memory and your self-respect and everything that goes along with your self-esteem.As quoted in Rolling Stone (April 16, 1992)

It’s really not hard to keep your dignity and sign to a major label… Most people don’t have any dignity in the first place.As quoted in Sounds (October 1990)

If I went to jail, at least I wouldn’t have to sign autographs.As quoted in Details (February 1992)

We have no right to express an opinion until we know all of the answers.Who Killed Kurt Cobain? by Ian Halperin

I like to have strong opinions with nothing to back them up with besides my primal sincerity. I like sincerity. I lack sincerity.The Book that Made Your World: How the Bible Created the Soul of Western Civilization by Vishal Mangalwadi

I’m a spokesman for myself. It just so happens that there’s a bunch of people that are concerned with what I have to say. I find that frightening at times because I’m just as confused as most people. I don’t have the answers for anything.As quoted in Rolling Stone (April 16, 1992)

A friend is nothing but a known enemy.Nirvana: Bikes, Guns and Love by Kurt Frenier

If you ever need anything please don’t hesitate to ask someone else first.Very Ape, from the album In Utero (1993)

My body is damaged from music in two ways. I have a red irritation in my stomach. It’s psychosomatic, caused by all the anger and the screaming. I have scoliosis, where the curvature of your spine is bent, and the weight of my guitar has made it worse. I’m always in pain, and that adds to the anger in our music.Kurt Cobain: The Cobain Dossier by Andrew Dent

If it’s illegal to rock and roll, throw my ass in jail!The Best Book of Useless Information Ever by Noel Botham

We’re so trendy we can’t even escape ourselves.Unknown source

It’s better to burn out than fade away.Cobain's suicide note

I like to complain and do nothing to make things better.As quoted in The Telegraph (November 16, 2002)

Rather be dead than cool.Stay Away, from the album Nevermind (1991)