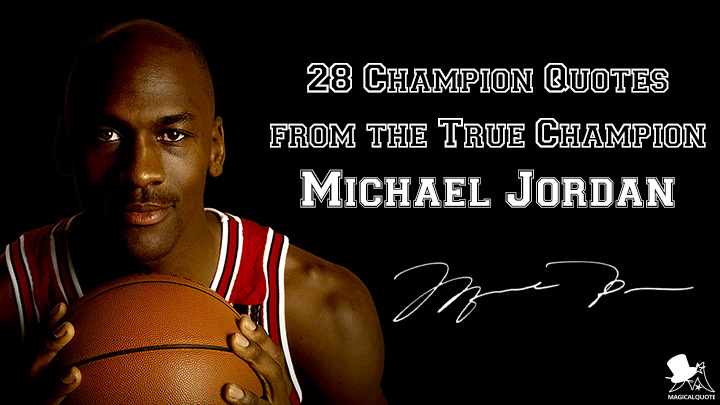 Michael Jeffrey Jordan (born February 17, 1963, in Brooklyn, New York) is a former basketball player which is considered one of the best players in the history of basketball. He is also known as MJ, Air Jordan, His Airness, and Black Cat.

During growing up in Wilmington, North Carolina, Michael developed a competitive spirit at an early age. One year before graduation, Jordan left college (University of North Carolina) to enter the 1984 NBA Draft. The first season at Chicago Bulls, he ended up as the NBA Rookie of the Year Award. After that, everything is well-known history.

With five regular-season MVPs and three All-Star MVPs in 15 seasons (13 for the Chicago Bulls and 2 for the Washington Wizards), Jordan became the player with the most awards in the NBA.

The following are some of his many achievements:

In addition to his basketball skills and winning mentality Jordan is also known as a great salesman with his Nike Air Jordans.

I’ve missed more than 9000 shots in my career. I’ve lost almost 300 games. 26 times, I’ve been trusted to take the game winning shot and missed. I’ve failed over and over and over again in my life. And that is why I succeed.As quoted in Nike Culture: The Sign of the Swoosh (1998), by Robert Goldman and Stephen Papson, p. 49

I can accept failure, everyone fails at something. But I can’t accept not trying.Michael Jordan on the Pursuit of Excellence. San Francisco, CA: HarperSanFrancisco, 1994. p. 129

My attitude is, if you push me toward something that you think is a weakness, then I will turn that perceived weakness into a strength.I'm back!: more rare air by Michael Jordan

Some people want it to happen, some wish it would happen, others make it happen.Unknown source

I hope that it’s given the millions of people that I’ve touched the optimism and desire to achieve their goals through hard work, perseverance, and positive attitude.Michael Jordan: Hall of Fame Basketball Superstar by Nathan Aaseng

If you’re trying to achieve, there will be roadblocks. I’ve had them – everybody has had them. But obstacles don’t have to stop you. If you run into a wall, don’t turn around and give up, figure out how to climb it, go through it, or work around it.Basketball Blood: Becoming More by Being Your Best by Ryan Cuff

The game has its ups and downs, but you can never lose focus of
your individual goals and you can’t let yourself be beat because of lack of effort.Unknown source

There is no such thing as a perfect basketball player, and I don’t believe there is only one greatest player either.For the Love of the Game: My Story by Michael Jordan

When I was young, I had to learn the fundamentals of basketball. You can have all the physical ability in the world, but you still have to know the fundamentals.Michael Jordan: basketball's best by Chip Lovitt

If you accept the expectations of others, especially negative ones, then you never will change the outcome.Unknown source

To be successful you have to be selfish, or else you never achieve. And once you get to your highest level, then you have to be unselfish. Stay reachable. Stay in touch. Don’t isolate.Driven from Within by Michael Jordan

You have competition every day because you set such high standards for yourself that you have to go out every day and live up to that.Jordan on Jordan by Jan Hubbard, Hoop Magazine (April 1997)

I play to win, whether during practice or a real game. And I will not let anything get in the way of me and my competitive enthusiasm to win.As quoted in: Jet Magazine, Volume 73, Part 2 (1988), p. 174

You have to expect things of yourself before you can do them.Michael Jordan: Phenomenon by Mark Vancil, Hoop Magazine (December 1991)

I mean we all fly. Once you leave the ground, you fly. Some people fly longer than others.Michael Jordan still flying high by Daniel Schorn, CBS news (October 23, 2005)

Sometimes, things may not go your way, but the effort should be there every single night.Collins can feel Jordan's pain by Bob Maaddi, Bangor Daily News (November 30, 2001)

The best evaluation I can make of a player is to look in his eyes and see how scared they are.Anything You Can Do, I Do Better by William C. Rhoden, The New York Times (January 20, 2000)

Sometimes you need to get hit in the head to realize that you’re in a fight.Even this Wizard couldn't end curse by Joseph White, The Free lance-Star (April 13, 2003)

I never looked at the consequences of missing a big shot… when you think about the consequences you always think of a negative result.Words of Wit, Wisdom, and Inspiration by and about Michael Jordan, Basketball's Greatest Superstar by Pat Williams

My body could stand the crutches but my mind couldn’t stand the sideline.Words of Wit, Wisdom, and Inspiration by and about Michael Jordan, Basketball's Greatest Superstar by Pat Williams

I want to wake up every day and do whatever comes in my mind, and not feel pressure or obligations to do anything else in my life.Jordan on Jordan by Jan Hubbard, Hoop Magazine (April 1997)

Enjoy every minute of life. Never second-guess life.How to be like Mike (2005)