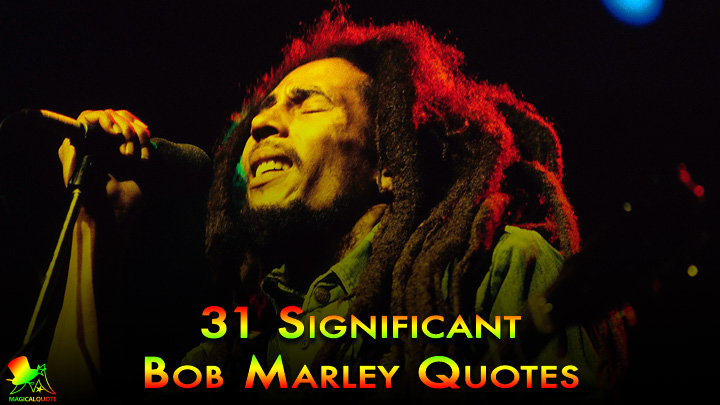 Robert Nesta Marley, known as Bob Marley, was a Jamaican reggae singer, musician and songwriter born on February 6, 1945, in St. Ann Parish, Jamaica. Marley’s best known and most respected performer of reggae music and one of the most responsible for popularizing the genre outside of Jamaica. He was a committed member of Rastafari movement.

Marley started his music career with a few singles, the first of which was “Judge Not”, released in 1962, before he and his friends formed a group Wailers. After the breakup of the band, Marley continued his solo career.  In 1997, he released the album “Exodus”, which earned him a worldwide reputation and made him one of the best-selling artists, with sales of more than 75 million records. Today, “Exodus” is considered to be one of the best albums ever made.

Bob Marley achieved many great accomplishments and awards during his lifetime. Some of them are Band of the Year in 1976, Peace Medal of the Third World in 1978 and Jamaican Order of Merit. He was posthumously inducted into the Hall of Fame in 1994 while his album “Exodus” was named Album of the Century by Time Magazine. Song “One Love” was declared Song of the Millennium by the BBC.

His greatest legacy is a music that still inspires not only musicians, but also all those who have recognized the true essence of his songs.

One good thing about music, when it hits you, you feel no pain.Trenchtown Rock, from the album Live! (1975)

Don’t bury your thoughts, put your vision to reality.Wake Up and Live!, from the album Survival (1979)

Open your eyes, look within.
Are you satisfied with the life you’re living?Exodus, from the album Exodus (1977)

Truth is everybody is going to hurt you: you just gotta find the ones worth suffering for.A User's Guide to Your Mind - Volume 2 by Michael Ra Bouchard

The greatness of a man is not in how much wealth he acquires, but in his integrity and his ability to affect those around him positively.Unknown source

Don’t gain the world and lose your soul. Wisdom is better than silver and gold.Zion Train, from the album Uprising (1980)

Emancipate yourself from mental slavery, none but ourselves can free our mind.Redemption Song, from the album Uprising (1979)

Every man gotta right to decide his own destiny.Zimbabwe, from the album Survival (1979)

In this great future, you can’t forget your past.No Woman, No Cry, from the album Natty Dread (1974)

When one door is closed don’t you know, other is open?Coming in from the Cold, from the album Uprising (1980)

If something can corrupt you, you’re corrupted already.Before the Legend by Christopher Farley

You entertain people who are satisfied. Hungry people can’t be entertained – or people who are afraid. You can’t entertain a man who has no food.Every Little Thing Gonna Be Alright: The Bob Marley Reader by Hank Bordowitz

Prejudice is a chain, it can hold you. If you prejudice, you can’t move, you keep prejudice for years. Never get nowhere with that.Interview by Karl Dallas, Rock's Backpages Audio, July 1975

Tell the children the truth.Babylon System, from the album Survival (1979)

Don’t worry about a thing, ‘Cause every little thing gonna be all right.Three Little Birds, from the album Exodus (1977)

Say you just can’t live that negative way, If you know what I mean; Make way for the positive day.Positive Vibration, from the album Rastaman Vibration (1976)

You never know how strong you are, until being strong is your only choice.Unknown source

My music fights against the system that teaches to live and die.As quoted in: Bob Marley (Virgin, 1997). And also in: The African Guardian, 1986

Man is a universe within himself.Unknown source

When you smoke the herb, it reveals you to yourself.Unknown source

The good times of today, are the sad thoughts of tomorrow.Unknown source

Herb is the healing of a nation, alcohol is the destruction.The True American Manifesto by Richard Fredericks Radicalrick

God sent me on earth. He send me to do something, and nobody can stop me. If God want to stop me, then I stop. Man never can.Every Little Thing Gonna Be Alright: The Bob Marley Reader edited by Hank Bordowitz

We don’t have education, we have inspiration; if I was educated I would be a damn fool.As recorded in Time Will Tell (1992), a documentary by Declan Lowney

Judge not, if you’re not ready for judgment.Judge Not (single, 1962)

Truth is the light so you never give up the fight.Final jamming of Live at the Roxy (recorded 1976)

Your life is worth much more than gold.Jamming, from the album Exodus (1977)

It is better to live on the house top than to live in a house full of confusion.Running Away, from the album Kaya

What important is man should live in righteousness, in natural love for mankind.Interview by Karl Dallas, Rock's Backpages Audio, July 1975