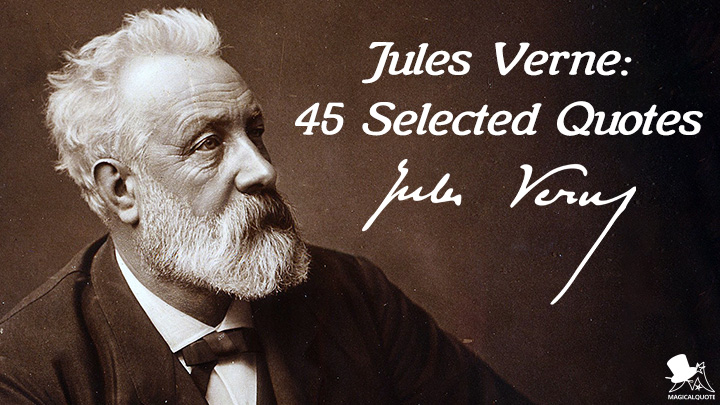 Jules Verne (Jules Gabriel Verne) was a 19th-century French novelist and poet, famous for his adventure novels and his strong influence on the literary genre of science fiction.

He was born on February 8, 1828, in Nantes, France. Although he was trained to be a lawyer like his father, Verne was showing more interest in writing and theatre. He graduated from law studies in Paris in January 1851 and then started writing plays and short stories.  After a few not-so-successful years as a playwright, Verne’s luck changed when he met the editor Pierre-Jules Hetzel.

From their collaboration was created a sequence of the popular adventure novels by title Voyages Extraordinaires which include titles such as The Mysterious Island (1874), Five Weeks in a Balloon (1863), Master of the World (1904), Off on a Comet (1877), Twenty Thousand Leagues Under the Sea (1869), Journey to the Center of the Earth (1864), From the Earth to the Moon (1865), and Around the World in Eighty Days (1873).

Often referred to as the “Father of Science Fiction”, Jules Verne wrote more than 70 books (mainly 54 novels belonging to the Voyages Extraordinaires) and many memorable characters.  Verne is also the second most translated author in the world immediately after Agatha Christie.

His writings did not inspire only writers but also and generations of scientists, inventors, and explorers. Read on and enjoy some of Jules Verne’s best quotes.

Anything one man can imagine, other men can make real.Around the World in Eighty Days (1872)

We are of opinion that instead of letting books grow moldy behind an iron grating, far from the vulgar gaze, it is better to let them wear out by being read.Journey to the Center of the Earth (1864)

Science, my lad, has been built upon many errors; but they are errors which it was good to fall into, for they led to the truth.Journey to the Center of the Earth (1864)

The sea is everything. It covers seven tenths of the terrestrial globe. Its breath is pure and healthy. It is an immense desert, where man is never lonely, for he feels life stirring on all sides. The sea is only the embodiment of a supernatural and wonderful existence. It is nothing but love and emotion; it is the ‘Living Infinite’.Twenty Thousand Leagues Under the Sea (1870)

In spite of the opinions of certain narrow-minded people, who would shut up the human race upon this globe, as within some magic circle it must never outstep, we shall one day travel to the moon, the planets, and the stars, with the same facility, rapidity, and certainty as we now make the voyage from Liverpool to New York!From the Earth to the Moon (1865)

We may brave human laws, but we cannot resist natural ones.Twenty Thousand Leagues Under the Sea (1870)

Liberty is worth paying for.Twenty Thousand Leagues Under the Sea (1870)

I seriously believed that my last hour was approaching, and yet, so strange is imagination, all I thought of was some childish hypothesis or other. In such circumstances, you do not choose your own thoughts. They overcome you.Journey to the Center of the Earth (1864)

Before all masters, necessity is the one most listened to, and who teaches the best.The Mysterious Island (1874)

When the mind once allows a doubt to gain entrance,
the value of deeds performed grow less, their character changes, we forget the past and dread the future.The Steam House (1880)

While there is life there is hope.Journey to the Center of the Earth (1864)

Trains, like time and tide, stop for no one.Around the World in Eighty Days (1872)

The possession of wealth leads almost inevitably to its abuse. It is the chief, if not the only, cause of evils which desolate this world below. The thirst for gold is responsible for the most regrettable lapses into sin.Captain Antifer (1894)

An energetic man will succeed where an indolent one would vegetate and inevitably perish.The Mysterious Island (1874)

I have noticed that many who do not believe in God believe in everything else, even in the evil eye.A Floating City (1870)

Man, a mere inhabitant of the earth, cannot overstep its boundaries! But though he is confined to its crust, he may penetrate into all its secrets.The Steam House (1880)

A man of merit owes himself to the homage of the rest of mankind who recognize his worth.Volume 1 of Works of Jules Verne, Charles Francis Horne (1911)

Civilization never recedes; the law of necessity ever forces it onwards.The Mysterious Island (1874)

‘Movement is life;’ and it is well to be able to forget the past, and kill the present by continual change.A Floating City (1870)

You cannot oppose reasoning to pride, the principal of all the vices, since, by its very nature, the proud man refuses to listen to it.Dr. Ox's Experiment (1872)

While his heart still beats, while his flesh still moves, I cannot accept that a being endowed with will-power can give in to despair.Journey to the Center of the Earth (1864)

Put two ships in the open sea, without wind or tide, and, at last,
they will come together. Throw two planets into space, and they will fall one on the other. Place two enemies in the midst of a crowd, and they will inevitably meet; it is a fatality, a question of time; that is all.A Floating City (1870)

Though sleep is called our best friend, it is a friend who often keeps us waiting!The Steam House (1880)

It is certain that the inanimate objects by which you are surrounded have a direct action on the brain.Journey to the Center of the Earth (1864)

It must be that a man who shuts himself up between four walls must lose the faculty of associating ideas and words.Journey to the Center of the Earth (1864)

The wisest man may be a blind father.The Begum's Fortune (1879)

It is always a vulgar and often an unhealthy pastime, and it is a vice which does not go alone; the man who gambles will find himself capable of any evil.A Floating City (1870)

The chance which now seems lost may present itself at the last moment.Around the World in Eighty Days (1872)

The earth does not want new continents, but new men.Twenty Thousand Leagues Under the Sea (1870)

It is a great misfortune to be alone, my friends; and it must be believed that solitude can quickly destroy reason.The Mysterious Island (1874)

The human mind delights in grand conceptions of supernatural beings.Twenty Thousand Leagues Under the Sea (1870)

In the memory of the dead all chronological differences are effaced.Twenty Thousand Leagues Under the Sea (1870)

Poets are like proverbs: you can always find one to contradict another.The Survivors of the Chancellor (1875)

A learned man ought to know a little of everything.The Adventures of Captain Hatteras (1864)

Perfume is the soul of the flower, and sea-flowers have no soul.Twenty Thousand Leagues Under the Sea (1870)

In friendship one friend is always sacrificed to the other.The Adventures of Captain Hatteras (1864)

Civilization is like air or water. Wherever there is a passage, be it only a fissure, it will penetrate and modify the conditions of a country.The Carpathian Castle (1893)

He who is mistaken in an action which he sincerely believes to be right may be an enemy, but retains our esteem.The Mysterious Island (1874)

The body regulates the soul, and, like the balance-wheel, it is submitted to regular oscillations.A Winter Amid the Ice (1855)

If there were no thunder, men would have little fear of lightning.Twenty Thousand Leagues Under the Sea (1870)

Death, the beginning of eternal things, is only the end of earthly cares.Five Weeks in a Balloon (1863)