Jean-Baptiste Poquelin (baptized January 15, 1622, Paris, France – died February 17, 1673, Paris, France), known by his pseudonym Molière, was a French playwright and actor, widely regarded as one of the greatest writers of comedy in Western literature.

With his plays translated into more and more languages. Moliere is today considered the creator of modern French comedy. Many of the words and expressions used in Moliere’s plays still can be found in current French.

One ought to look a long time at one’s self before thinking of condemning other people.'Act III. Scene V.' The Misanthrope (1666)

Hypocrisy is a privileged vice, which, with its own hand, closes the mouth of all the world, and peacefully enjoys a sovereign impunity.'Act V. Scene II.' Don Juan, or, The Stone Banquet (1665) 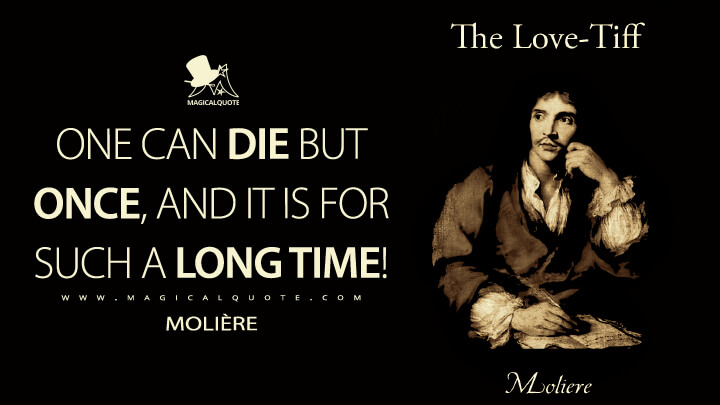 The duty of comedy being to correct men’s errors in the course of amusing them.First petition addressed to the king Louis XIV concerning the play Tartuffe in 1664.

Sound reason shuns extremes, and teaches wisdom with sobriety.'Act I. Scene I.' The Misanthrope (1666) 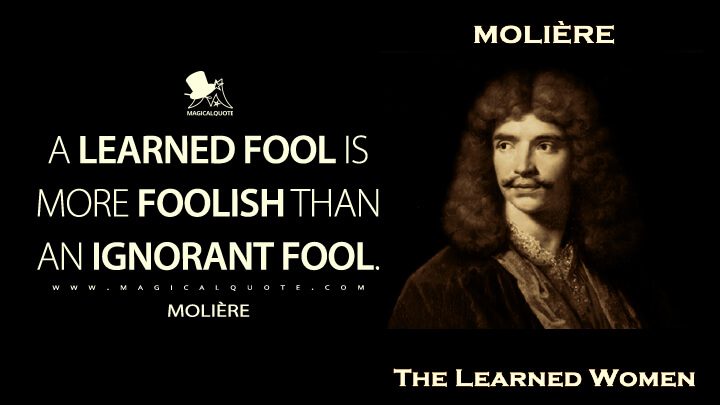 A learned fool is more foolish than an ignorant fool.'Act IV. Scene III.' The Learned Ladies (1672)

People do not mind being wicked; but they object to being made ridiculous.'Preface' Tartuffe (1664)

In the age in which we live, people give nothing for nothing.'Act III. Scene II.' The School for Wives (1662)

Appearances very often deceive us. You must not always judge by what you see.'Act V. Scene III.' Tartuffe (1664) 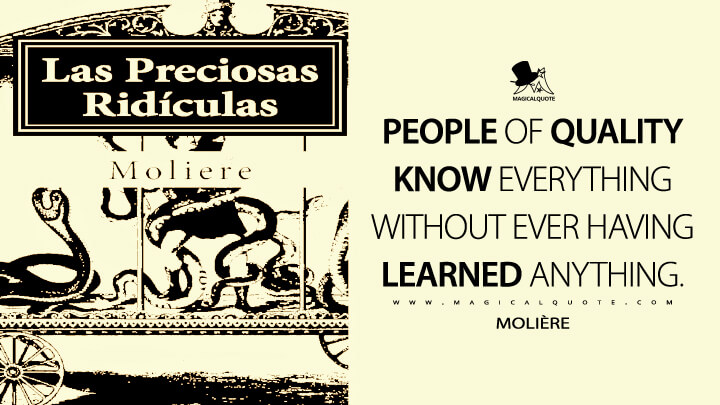 People of quality know everything without ever having learned anything.'Scene 9' The Ridiculous Précieuses (1659)

People are easily duped by those whom they love, and conceit is apt to deceive itself.'Act IV. Scene III.' Tartuffe (1664)

The absence of what love, however short, is always too long.'Act II. Scene II.' Amphitryon (1668)

One of the weaknesses of human nature is curiosity to learn things which it would not like to know.'Act II. Scene III.' Amphitryon (1668) 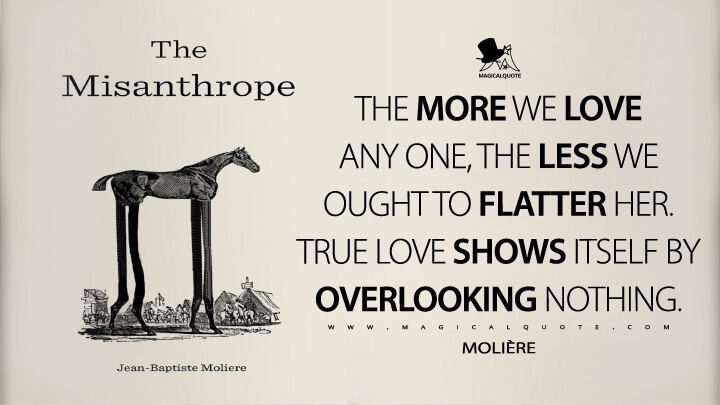 The more we love any one, the less we ought to flatter her. True love shows itself by overlooking nothing.'Act II. Scene IV.' The Misanthrope (1666)

Consult Reason, take her for your guide.'Act II. Scene IV.' Don Garcia of Navarre or the Jealous Prince (1661)

A wise man is above all the insults which one can give him; and the great answer one ought to give to all outrages, is moderation and patience.'Act II. Scene IV.' The Bourgeois Gentleman (1670)

It is better to die according to rule than to recover in violation of it.'Act II. Scene V.' Love Is the Doctor (1665) 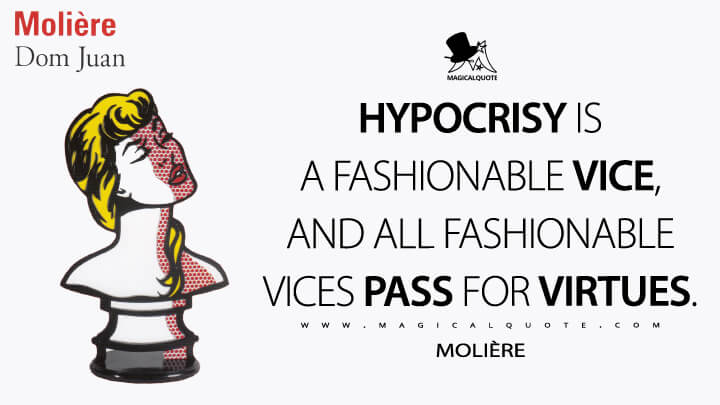 It’s always the most ridiculous people who are the first to slander others.'Act I. Scene I.' Tartuffe (1664) 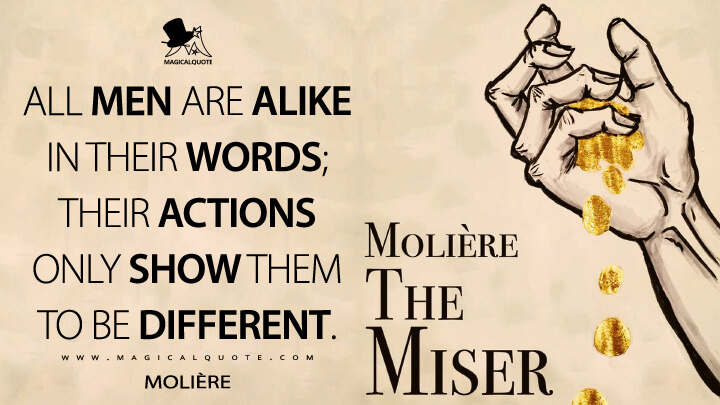 All men are alike in their words; their actions only show them to be different.'Act I. Scene I.' The Miser (1668)

Curiosity is the daughter of jealousy.'Act II. Scene V.' Don Garcia of Navarre or the Jealous Prince (1661)

Nearly all men die of their remedies, not of their diseases.'Act III. Scene III.' The Imaginary Invalid (1673)

The more exalted my rank, the more glaring becomes the insult.'Prologue' Psyche (1671) 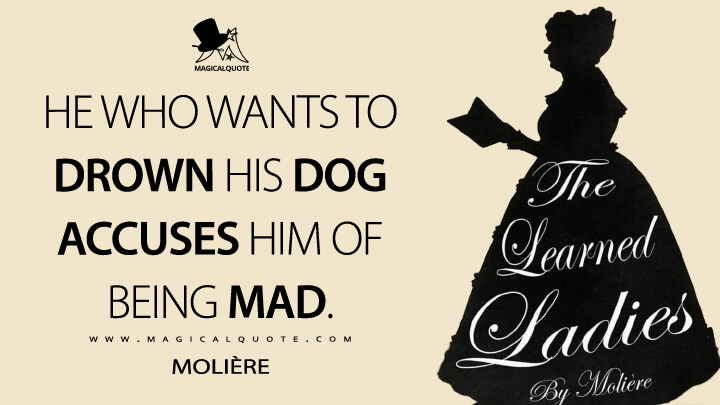 He who wants to drown his dog accuses him of being mad.'Act II. Scene VI.' The Learned Ladies (1672)

The less we deserve a happiness which has been promised us, the greater is the difficulty we feel in believing in it.'Act II. Scene VI.' Don Garcia of Navarre or the Jealous Prince (1661)

A heart that is in love can never offend, and finds excuses for whatever love may do.'Act II. Scene VI.' Don Garcia of Navarre or the Jealous Prince (1661)

It is pleasant for money to come into our purse; but when the time comes that we have to give it back, then the pangs of labour seize us.'Act I. Scene V.' The Blunderer, or, the Counterplots (1655) 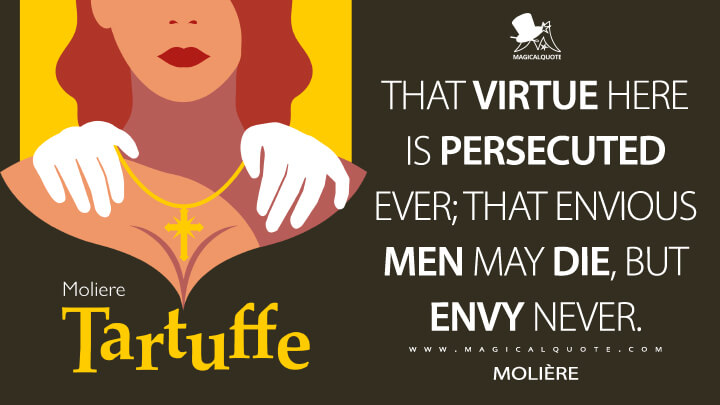 That virtue here is persecuted ever; that envious men may die, but envy never.'Act V. Scene III.' Tartuffe (1664)

There is no doubt that he will do all he can; and if he has money he can do all he will.'Act II. Scene VII.' The Blunderer, or, the Counterplots (1655)

The greatest failing in men is their love of life.'Act III. Scene I.' Love Is the Doctor (1665)

Preference must be based on esteem, and to esteem every one is to esteem no one.'Act I. Scene I.' The Misanthrope (1666) 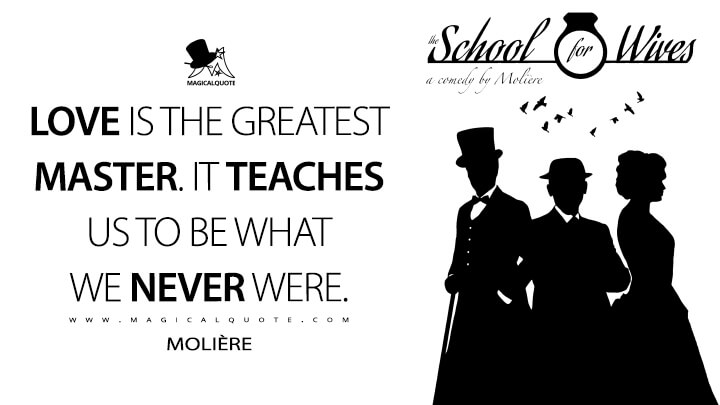 Love is the greatest master. It teaches us to be what we never were.'Act III. Scene IV.' The School for Wives (1662)

A fool who says nothing cannot be distinguished from a wise man who holds his tongue.'Act II. Scene VI.' The Love-Tiff (1656)

A woman’s head is like a weathercock on the top of a house, which veers about at the slightest breeze.'Act IV. Scene II.' The Love-Tiff (1656)

Silence itself, is enough to show the impulses of a heart.'Act I. Scene I.' Don Garcia of Navarre or the Jealous Prince (1661) 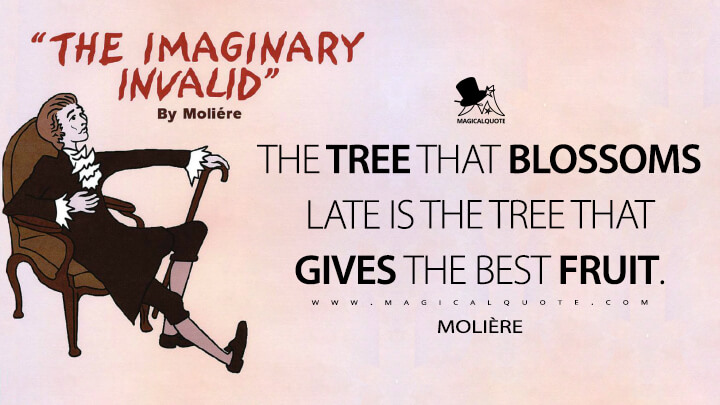 The tree that blossoms late is the tree that gives the best fruit.'Act II. Scene V.' The Imaginary Invalid (1673)

The greater the obstacle, the more glory in overcoming it.No source

Without knowledge, life is no more than the shadow of death.No source

Beauty without intelligence is like a hook without bait.No source

We must eat to live, and not live to eat.Ancient saying (More info)