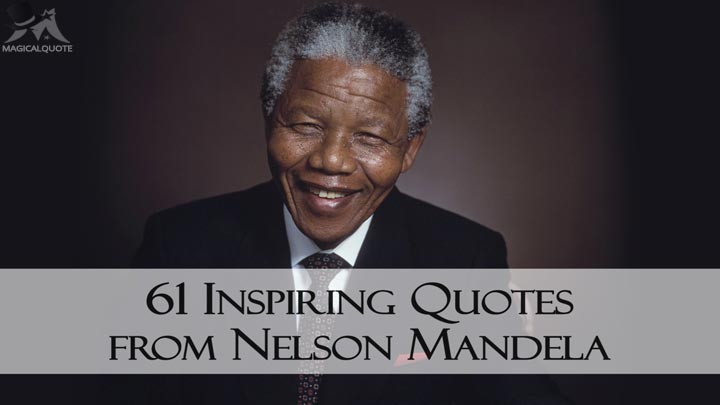 Nelson Rolihlahla Mandela was the first President of South Africa who is elected in a fully representative democratic election, co-winner of Nobel Peace Prize with F.W. de Klerk, revolutionary, anti-apartheid icon, and philanthropist who his whole life dedicated to the struggle for human rights.

He was adamant when it comes to racial equality, the fight against poverty, and faith in humanity. His sacrifice has managed to create a new and better chapter in the life of all South Africans and the world, and therefore, Madiba will be remembered as one of the greatest men who ever lived.

During his long lifetime Mandela inspired us with numerous words of wisdom, which will remain in the memories of many people.

Education is the most powerful weapon which you can use to change the world.Mindset Network on July 16, 2003 at Planetarium, University of the Witwatersrand Johannesburg South Africa

No country can really develop unless its citizens are educated.The Oprah Magazine (April 2001)

A good head and good heart are always a formidable combination. But when you add to that a literate tongue or pen, then you have something very special.Higher than hope: a biography of Nelson Mandela by Fatima Meer (1990)

I learned that courage was not the absence of fear, but the triumph over it. The brave man is not he who does not feel afraid, but he who conquers that fear. Long Walk to Freedom by Nelson Mandela (1995)

Courageous people do not fear forgiving, for the sake of peace.Mandela: The Authorised Biography by Anthony Sampson (1999)

It is better to lead from behind and to put others in front, especially when you celebrate victory when nice things occur. You take the front line when there is danger. Then people will appreciate your leadership.A date with failure! by Somi Uranta (2004)

Real leaders must be ready to sacrifice all for the freedom of their people.Kwadukuza, Kwazulu-Natal, South Africa (April 25, 1998)

As I have said, the first thing is to be honest with yourself. You can never have an impact on society if you have not changed yourself… Great peacemakers are all people of integrity, of honesty, but humility.Character-Centred Leadership: Principles and Practice of Effective Leading by Micah Amukobole (2012)

A leader… is like a shepherd. He stays behind the flock, letting the most nimble go out ahead, whereupon the others follow, not realizing that all along they are being directed from behind.Long Walk to Freedom by Nelson Mandela (1995)

I was not a messiah, but an ordinary man who had become a leader because of extraordinary circumstances.Long Walk to Freedom by Nelson Mandela (1995)

In countries where innocent people are dying, the leaders are following their blood rather than their brains.The New York Times Biographical Service (1997)

There are times when a leader must move out ahead of the flock, go off in a new direction, confident that he is leading his people the right way.Long Walk to Freedom by Nelson Mandela (1995)

For to be free is not merely to cast off one’s chains, but to live in a way that respects and enhances the freedom of others.Long Walk to Freedom by Nelson Mandela (1995)

There is no easy walk to freedom anywhere, and many of us will have to pass through the valley of the shadow of death again and again before we reach the mountaintop of our desires.No Easy Walk to Freedom (1973) by Nelson Mandela

As I walked out the door toward the gate that would lead to my freedom, I knew if I didn’t leave my bitterness and hatred behind, I’d still be in prison.When Mandela was released from prison (February 11, 1990)

Only free men can negotiate. A prisoner cannot enter into contracts.Refusing to bargain for freedom after 21 years in prison, as quoted in TIME (February 25, 1985)

There is no such thing as part freedom.Unknown source

Freedom would be meaningless without security in the home and in the streets.Speech (April 27, 1995)

A man who takes away another man’s freedom is a prisoner of hatred, he is locked behind the bars of prejudice and narrow-mindedness. I am not truly free if I am taking away someone else’s freedom, just as surely as I am not free when my freedom is taken from me. The oppressed and the oppressor alike are robbed of their humanity.Long Walk to Freedom by Nelson Mandela (1995)

If you want to make peace with your enemy, you have to work with your enemy. Then he becomes your partner.Long Walk to Freedom by Nelson Mandela (1995)

I like friends who have independent minds because they tend to make you see problems from all angles.From his unplubished autobiographical manuscript written in 1975

Everyone can rise above their circumstances and achieve success if they are dedicated to and passionate about what they do.From a letter to Makhaya Ntini on his 100th Cricket Test (December 17, 2009)

Do not judge me by my successes, judge me by how many times I fell down and got back up again.Excerpts from an interview for the documentary 'Mandela' (1994)

A winner is a dreamer who never gives up.Unknown source

Resentment is like drinking poison and then hoping it will kill your enemies.Bottom Line, Personal – Volume 26 (2005)

I hate race discrimination most intensely and in all its manifestations. I have fought it all during my life; I fight it now, and will do so until the end of my days.First court statement (1962)

To deny any people their human rights is to challenge their very humanity.Speech in Congress, Washington ( June 26, 1990)

When a man has done what he considers to be his duty to his people and his country, he can rest in peace.In an interview for the documentary Mandela (1994)

When people are determined they can overcome anything.From a conversation with Morgan Freeman, Johannesburg (November 2006)

We must use time wisely and forever realize that the time is always ripe to do right.A date with failure! by Somi Uranta (2004)

Man’s goodness is a flame that can be hidden but never extinguished.Long Walk to Freedom by Nelson Mandela (1995)

Overcoming poverty is not a task of charity, it is an act of justice. Like Slavery and Apartheid, poverty is not natural. It is man-made and it can be overcome and eradicated by the actions of human beings. Sometimes it falls on a generation to be great. YOU can be that great generation. Let your greatness blossom.Speech in London's Trafalgar Square (February 2005)

In my country we go to prison first and then become President. Long Walk to Freedom by Nelson Mandela (1995)

It is said that no one truly knows a nation until one has been inside its jails. A nation should not be judged by how it treats its highest citizens, but its lowest ones.Long Walk to Freedom by Nelson Mandela (1995)

There is no passion to be found playing small – in settling for a life that is less than the one you are capable of living.The other 90%: how to unlock your vast untapped potential for leadership and life by Robert K. Cooper (2001)

Difficulties break some men but make others. No axe is sharp enough to cut the soul of a sinner who keeps on trying, one armed with the hope that he will rise even in the end.Letter to Winnie Mandela (February 1, 1975), written on Robben Island.

If I had my time over I would do the same again. So would any man who dares call himself a man.Mitigation speech after being convicted of inciting a strike and leaving the country illegally (November 1962)

A fundamental concern for others in our individual and community lives would go a long way in making the world the better place we so passionately dreamt of. Kliptown, Soweto, South Africa (July 12, 2008)

I am fundamentally an optimist. Whether that comes from nature or nurture, I cannot say. Part of being optimistic is keeping one’s head pointed toward the sun, one’s feet moving forward. There were many dark moments when my faith in humanity was sorely tested, but I would not and could not give myself up to despair. That way lays defeat and death.Long Walk to Freedom by Nelson Mandela (1995)

When a man is denied the right to live the life he believes in, he has no choice but to become an outlaw.Long Walk to Freedom by Nelson Mandela (1995)

No one is born hating another person because of the color of his skin, or his background, or his religion. People must learn to hate, and if they can learn to hate, they can be taught to love, for love comes more naturally to the human heart than its opposite.Long Walk to Freedom by Nelson Mandela (1995)

The greatest glory in living lies not in never falling, but in rising every time we fall.Long Walk to Freedom by Nelson Mandela (1995)

There is nothing like returning to a place that remains unchanged to find the ways in which you yourself have altered.Long Walk to Freedom by Nelson Mandela (1995)

I am not a saint, unless you think of a saint as a sinner who keeps on trying.The Baker Institute at Rice University, Houston (October 26, 1999)

One of the things I learned when I was negotiating was that until I changed myself, I could not change others.The Sunday Times (April 16, 2000)

There can be no keener revelation of a society’s soul than the way in which it treats its children.Mahlamba'ndlophu, Pretoria, South Africa (May 8, 1995)

Our human compassion binds us the one to the other – not in pity or patronizingly, but as human beings who have learnt how to turn our common suffering into hope for the future.Dedicated To Hiv/Aids Sufferers and for The Healing Of Our Land” at Johannesburg (December 6, 2000)

It is wise to persuade people to do things and make them think it was their own idea.Mandela: His 8 Lessons of Leadership by Richard Stengel, Time Magazine (July 09, 2008)

When the water starts boiling it is foolish to turn off the heat.A date with failure! by Somi Uranta (2004)

I have retired, but if there’s anything that would kill me it is to wake up in the morning not knowing what to do.Unknown source

I can’t pretend that I’m brave and that I can beat the whole world.Mandela: His 8 Lessons of Leadership by Richard Stengel, Time Magazine (July 09, 2008)

Nonviolence is a good policy when the conditions permit.Atlanta's Hartsfield International Airport (June 28, 1990)

Even if you have a terminal disease, you don’t have to sit down and mope. Enjoy life and challenge the illness that you have.Readers Digest interview (2005)

It is in the character of growth that we should learn from both pleasant and unpleasant experiences. Foreign Correspondent's Association's Annual Dinner, Johannesburg, South Africa (November 21, 1997)

What counts in life is not the mere fact that we have lived. It is what difference we have made to the lives of others that will determine the significance of the life we lead. 90th Birthday celebration of Walter Sisulu, Walter Sisulu Hall, Randburg, Johannesburg, South Africa (May 18, 2002)

We tried in our simple way to lead our life in a manner that may make a difference to those of others.Upon Receiving the Roosevelt Freedom Award (June 8, 2002)

Appearances matter – and remember to smile.Mandela: His 8 Lessons of Leadership by Richard Stengel, Time Magazine (July 09, 2008)

What is your most inspiring quote from Nelson Mandela?