The Sirens of Titan Quotes

There is no reason why good cannot triumph as often as evil. The triumph of anything is a matter of organization. If there are such things as angels, I hope that they are organized along the lines of the Maffia.[William Niles Rumfoord]

The worst thing that could possibly happen to anybody, would be to not be used for anything by anybody.

The only thing I ever learned was that some people are lucky and other people aren’t and not even a graduate of the Harvard Business School can say why.

Do Some Magic!
Find more about The Sirens of Titan on Amazon

The Earthlings behaved at all times as though there were a big eye in the sky—as though that big eye were ravenous for entertainment. The big eye was a glutton for great theater. The big eye was indifferent as to whether the Earthling shows were comedy, tragedy, farce, satire, athletics, or vaudeville. Its demand, which Earthings apparently found as irresistible as gravity, was that the shows be great. The demand was so powerful that Earthlings did almost nothing but perform for it, night and day—and even in their dreams. The big eye was the only audience that Earthlings really cared about.

The bounties of space, of infinite outwardness, were three: empty heroics, low comedy, and pointless death.

Sometimes I think it is a great mistake to have matter that can think and feel. It complains so. By the same token, though, I suppose that boulders and mountains and moons could be accused of being a little too phlegmatic.[Winston Niles Rumfoord]

Puny man can do nothing at all to help or please God Almighty, and Luck is not the hand of God. 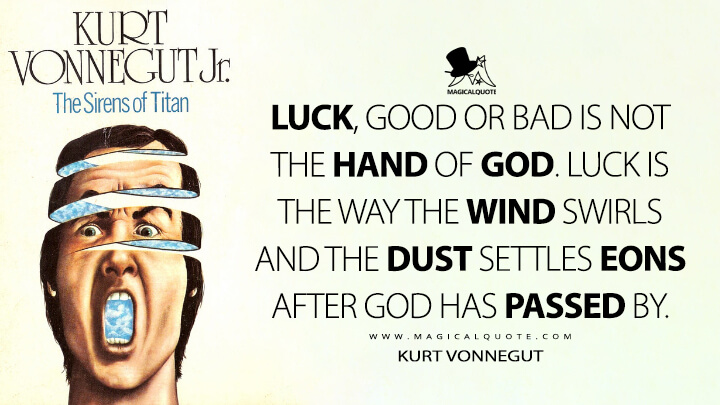 Luck, good or bad is not the hand of God. Luck is the way the wind swirls and the dust settles eons after God has passed by.

I was a victim of a series of accidents. As are we all.

Every passing hour brings the Solar System forty-three thousand miles closer to Globular Cluster M13 in Hercules—and still there are some misfits who insist that there is no such thing as progress.

As far as I’m concerned, the Universe is a junk yard, with everything in it overpriced. I am through poking around in the junk heaps, looking for bargains. Every so-called bargain, has been connected by fine wires to a dynamite bouquet.