The Protestant Ethic and the Spirit of Capitalism Quotes

The purely emotional form of Pietism is, as Ritschl has pointed out, a religious dilettantism for the leisure class.

The process of sanctifying life could thus almost take on the character of a business enterprise. 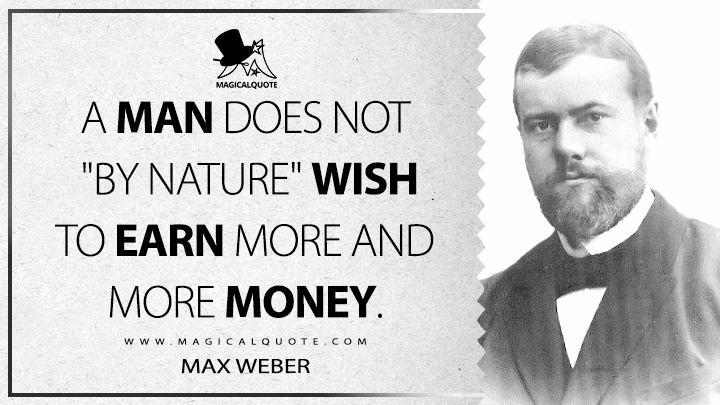 A man does not by nature wish to earn more and more money.[Der Mensch will »von Natur« nicht Geld und mehr Geld verdienen.]

The modern man is in general, even with the best will, unable to give religious ideas a significance for culture and national character which they deserve.

The impulse to acquisition, pursuit of gain, of money, of the greatest possible amount of money, has in itself nothing to do with capitalism. This impulse exists and has existed among waiters, physicians, coachmen, artists, prostitutes, dishonest officials, soldiers, nobles, crusaders, gamblers, and beggars. One may say that it has been common to all sorts and conditions of men at all times and in all countries of the earth, wherever the objective possibility of it is or has been given. It should be taught in the kindergarten of cultural history that this naïve idea of capitalism must be given up once and for all.

The ability of mental concentration, as well as the absolutely essential feeling of obligation to one’s job, are here most often combined with a strict economy which calculates the possibility of high earnings, and a cool self-control and frugality which enormously increase performance.

Specialists without spirit, sensualists without heart; this nullity imagines that it has attained a level of civilization never before achieved.

Remember, that money is of the prolific, generating nature. Money can beget money, and its offspring can beget more, and so on.

It is true that the path of human destiny cannot but appal him who surveys a section of it. But he will do well to keep his small personal commentarie to himself, as one does at the sight of the sea or of majestic mountains, unless he knows himself to be called and gifted to give them expression in artistic or prophetic form. In most other cases the voluminous talk about intuition does nothing but conceal a lack of perspective toward the object, which merits the same judgment as a similar lack of perspective toward men.

Beware of thinking all your own that you possess, and of living accordingly. It is a mistake that many people who have credit fall into.