Down and Out in Paris and London Quotes

If you set yourself to it, you can live the same life, rich or poor. You can still keep on with your books and your ideas. You just got to say to yourself, “I’m a free man in HERE'” — he tapped his forehead— ‘and you’re all right.’

Fear of the mob is a superstitious fear. It is based on the idea that there is some mysterious, fundamental difference between rich and poor, as though they were two different races, like Negroes and white men. But in reality there is no such difference. The mass of the rich and the poor are differentiated by their incomes and nothing else, and the. average millionaire is only the average dishwasher dressed in a new suit. Change places, and handy dandy, which is the justice, which is the thief? Everyone who has mixed on equal terms with the poor knows this quite well. But the trouble is that intelligent, cultivated people, the very people who might be expected to have liberal opinions, never do mix with the poor. For what do the majority of educated people know about poverty?

Within certain limits, it is actually true that the less money you have, the less you worry. 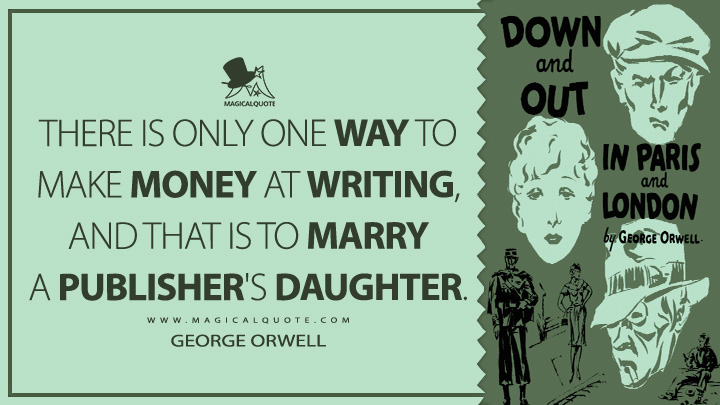 There is only one way to make money at writing, and that is to marry a publisher’s daughter.

The stars are a free show; it don’t cost anything to use your eyes.

The man who really merits pity is the man who has been down from the start, and faces poverty with a blank, resourceless mind.

Poverty frees them from ordinary standards of behaviour, just as money frees people from work.

It is fatal to look hungry. It makes people want to kick you.

It is curious how people take it for granted that they have a right to preach at you and pray over you as soon as your income falls below a certain level.

It is a feeling of relief, almost of pleasure, at knowing yourself at last genuinely down and out. You have talked so often of going to the dogs — and well, here are the dogs, and you have reached them, and you can stand it. It takes off a lot of anxiety.

He was an embittered atheist (the sort of atheist who does not so much disbelieve in God as personally dislike Him).

Summer on the LakesThe Notebooks of Malte Laurids BriggeYou Learn by LivingThe Nomad: The Diaries of Isabelle EberhardtJohn BarleycornConversations of GoetheConversations with William StyronWomenThe Education of Henry Adams